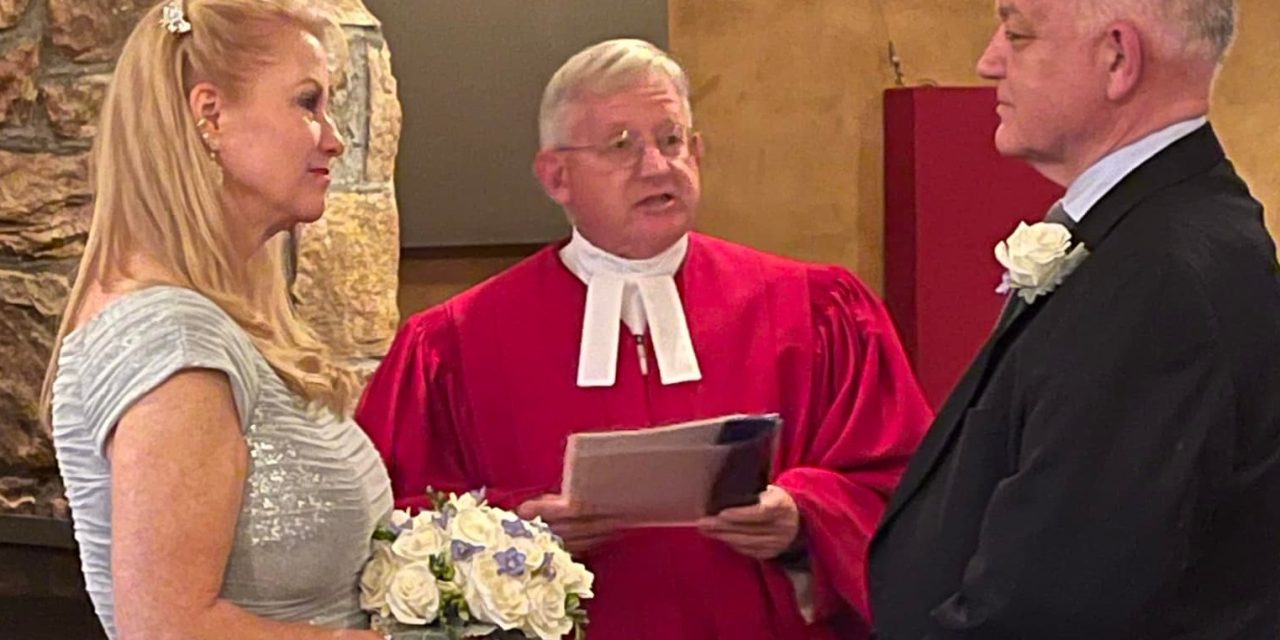 Bethamy Beam, chair of the Maryland State Board of Contract Appeals, married David Brinkley, secretary of Budget and Management, Saturday, presided over by Joseph Getty, chief judge of the Court of Appeals, the state;s high court. Brinkley and Getty served in the Maryland Senate together. From Bethamy Brinkley's Facebook page.

MARYLAND GAINS ALMOST 15,000 JOBS IN OCTOBER: Maryland’s economy gained 14,900 jobs in October and the state’s unemployment rate decreased from 5.9% to 5.7%, according to preliminary data released by the U.S. Department of Labor’s Bureau of Labor Statistics on Friday morning, reports Bryan Renbaum for Maryland Reporter. The latest numbers mean that the state’s unemployment rate is at its lowest level since the beginning of the COVID-19 pandemic more than 20 months ago.

STUDY: 2018 VOTE CREATED MOST DIVERSE LEGISLATURE: Devon Milley and Clara Niel of Capital News Service report that following the 2018 Maryland General Assembly elections, the state legislature became the most diverse and representative of the state’s general population it has ever been, but data collected from the U.S. Census Bureau and the state of Maryland shows that there is still room for improvement.

MARYLAND RANKS 44th FOR PROTECTING CHILDREN IN SEX TRAFFICKING: Nearly every year for the past decade, a prominent anti-trafficking organization has handed out a “report card” assigning each state a grade on its laws to protect victims of child sex trafficking to motivate legislators to pass bills that ensure children sold for sex are not treated as criminals but as victims in need of services. Maryland ranked among the worst states for child victims in the country, in 44th place, Jessica Contrera reports in the Post.

SCHOOLS AGREE TO HOLD KIDS VAXX CLINICS: Rachel Logan of Capital News Service reports that over two weeks into vaccine eligibility for 5- to 11-year-olds, all local school and health systems in Maryland have agreed to facilitate clinics, and vaccination rates are climbing. The article appears in Maryland Reporter. State Secretary of Health Dennis Schrader estimated there are 518,000 children in Maryland that age. Nearly 80,000 children, or 15% of those in that age group, have gotten their first doses. Vaccinations for 5- to 11-year-olds made up 44% of all vaccinations statewide since Nov. 3.

HOGAN OKs BOOSTERS FOR ALL ADULTS: Ahead of full federal authorization, Maryland Gov. Larry Hogan Friday gave the OK for all vaccinated adults over age 18 to get COVID-19 booster doses, saying more coverage is needed ahead of the upcoming winter holidays, Hallie Miller and Meredith Cohn report in the Sun.

LAWMAKER-DOCTOR WON’T FACE SANCTIONS: A Maryland lawmaker who is also a doctor will not face ethics sanctions for joining public video meetings from the operating room, Pamela Wood of the Sun reports. The General Assembly’s Joint Committee on Legislative Ethics met Monday to discuss a complaint filed against Del. Terri Hill, who acknowledged logging into Zoom for legislative meetings twice earlier this year while at work as a surgeon.

MENTAL HEALTH PRO TO RUN FOR DELEGATE: After working as a mental health professional, small business owner and activist throughout the county, LaToya Nkongolo said running for the Maryland House of Delegates seemed like the next step to help Anne Arundel residents at a greater scale. She will be running to represent District 31B, currently represented by Republicans Brian Chisholm and Nic Kipke, Dana Munro of the Capital Gazette reports.

McGRATH PLEADS NOT GUILTY: Roy McGrath, the former chief of staff to Maryland Gov. Larry Hogan, is pleading not guilty to federal charges that he misled officials into paying him a six-figure severance from his previous job and misused government money, Pamela Wood of the Sun reports. McGrath, 52, entered a not guilty plea during a brief arraignment hearing before U.S. District Court Magistrate Judge J. Mark Coulson on Friday afternoon.

CECIL RESIDENTS SEEK INCLUSION IN EASTERN SHORE DISTRICT: Cecil County residents urged members of the Legislative Redistricting Advisory Commission to keep their county in the same congressional district as the Eastern Shore rather than combine it with portions of Baltimore, reports Bennett Leckrone for Maryland Matters.

STATE HOUSE DOME TO GET REVAMP: The historic dome atop the Maryland State House, and surrounding grounds and structures, is scheduled to get a revamp with a new $619,620 state contract, Alexandra Radovic of Capital News Service reports in a story that appears in Maryland Reporter.

OPINION: THE UPSIDE AND DOWNSIDE OF BECOMING WEST VIRGINIA: Retired Cumberland Times-News outdoor editor Mike Sawyers weighs in on the recent suggestion – since rescinded – by some Western Maryland lawmakers that Western Maryland become part of West Virginia. He notes: “If we became West Virginia residents, anybody who wants to can hunt bears. Our West Virginia resident hunting and fishing licenses would allow us to fish in the Smoke Hole and other top-notch trout waters for less money than we now pay.”

INFLATION SPARKS MARYLANDERS TO REBUDGET: Some Marylanders say they are changing their budgets as they pay more for basic necessities like groceries and gas due to inflation, reports Brittany Gaddy for Capital News Service in Maryland Reporter. “My husband keeps saying as the prices keep going up he’s not going to be able to retire,” Donna Rhodes, a 62-year-old retiree from Owings, said as she put groceries into a car. “You would like prices to go down instead of the prices going up.”

UM JOURNALISM MAJOR NOW OPEN TO ALL: The University of Maryland’s journalism major is no longer a Limited Enrollment Program — a status that had capped enrollment and led to more competitive admissions criteria in the major, Hannah Ziegler of the Diamondback reports. Without the LEP status, students can transfer into the program without taking certain courses or receiving certain grades beforehand, said Lucy Dalglish, dean of the journalism college. It makes the program more “inclusive,” she added.

DOUBLE VOTES PROBED IN ANNAPOLIS: The Annapolis board of elections is investigating three instances of voters in Ward 8 each casting two ballots in the 2021 general election, Brooks DuBose reports for the Capital Gazette. The Board of Supervisors of Elections, which administers the city’s elections, was notified by county elections officials during a final canvass of ballots on Nov. 9, said the board’s chair Eileen Leahy.

PG SCHOOLS SEEK TO LESSEN TEACHER STRESS: In an effort to allow planning time for educators and to reduce mental stress, the Prince George’s County school board voted unanimously Thursday to revise the school calendar to offer three-hour early dismissals for students and for schools to open for a half-day on the day before Christmas Eve, William Ford reports for the Washington Informer.

HOGAN REWARD OFFER HIGHLIGHTS TENSION WITH CITY: A day after a 69-year-old woman was found stabbed to death in a Baltimore City church, Gov. Larry Hogan (R) offered a $100,000 reward from the state and called on Mayor Brandon Scott (D) to match it. The governor’s reward and his response to the city’s escalating violence have also laid bare the continued fraught relationship between Hogan, who has taken a law-and-order stance, and liberal-leaning city leaders as they struggle to put an end to violent crime, Ovetta Wiggins of the Post reports.

HO CO MAN IN CAPITAL RIOT REJECTS PLEA DEAL: A Maryland man accused of spraying a fire extinguisher toward police at an entrance to the U.S. Capitol during the Jan. 6 riot has rejected a plea deal presented by federal prosecutors, according to a court filing Friday, the AP reports. The court filing doesn’t disclose any terms of the plea agreement that prosecutors offered to 22-year-old Matthew Ryan Miller of Cooksville.

DeFILIPPO SAYS BYE FOR NOW: Long-time political observer and pundit Frank DeFilippo says farewell to his column for Maryland Matters, at least for now, and recounts some of the characters in his 60 years of “chronicling the comic opera of politics … eight of those with an insider’s view of what makes politics and government tick – and sometimes go amok.”