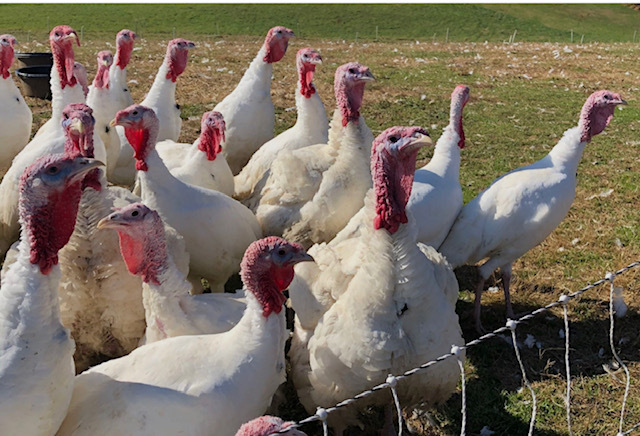 ANNAPOLIS, Md. — Maryland’s small turkey farmers faced higher costs this year, but Thanksgiving has allowed many to sell their entire inventory well before the holiday.

High fuel costs have led to high feed prices, according to a local farmer, leading some to raise turkey prices while others absorb the hit.

No, not those long, lazy days of cold turkey sandwiches and watching football after Thanksgiving, but the Saturday and Sunday before.

Smith expects about 400 people to come to his farm and pick up pre-ordered turkeys over this coming weekend.

Add in deliveries to restaurants and private companies, and Springfield’s sales this year are around 700 turkeys, he said.

Smith said the farm sold out of turkeys earlier this year than in the past, even with slightly higher prices — 50 cents more per pound.

Smith said he sold turkeys at $10 per pound this year — the Springfield Farm site advertises birds between 13 and 18 pounds.

He said costs to run the farm are up, including for feed and electricity.

Smith said he probably should have raised prices more, to the tune of $1.50 to $2 per pound over last year’s price.

“We didn’t want to be greedy, but by the same token we have to watch our bottom line,” Smith said.

The urge to keep prices down, despite rising costs, extended to Carriage House Farms northwest of Baltimore.

“By rights, just in terms of mortality alone, I could …. push price up to $12 or more a pound,” said Gaylord Clark, president and owner of Carriage House.

Death came earlier in the turkey season, when Clark said he lost lots of birds to cold weather.

Clark said instead of raising the price, he’s kept it at $7.25 a pound, a cost Clark said he’s “acutely aware of.”

“This is not an easy thing for our customers to do,” Clark said. “We want to hang onto them and be reasonably profitable.”

Clark said his farm has turned away business, but tries to refer people to friends who also raise turkeys.

Many shoppers decide to go the grocery store route.

Bob Fitzpatrick is a general manager for two Graul’s Market locations in Annapolis and said he’s able to stock all sizes of fresh turkeys, though one order was split between two deliveries.

For other Thanksgiving items, Fitzpatrick said he’s been able to substitute in different brands.

“Some of the staple items, we’re getting some but we’re having to substitute some,” Fitzpatrick said. Earlier this season, problem items included yams and sugars, he said.

He also says for customers who don’t wait until the last minute to shop, prices shouldn’t be too much of a concern.

“They’re up a little but they’re not up as extraordinary as I’m hearing out there on the news,” Kinsella said.

According to a USDA report issued earlier this month, the price per pound of frozen tom turkey was up about 20 cents relative to 2020 — to about $1.36.

According to the Bureau of Labor Statistics, consumer prices, including food, are up about 6 percent over the past year.

But even without a shortage at the supermarket, the demand for local turkeys is real.

Many of Way’s customers have been buying from her for a long time, she said.

That means they know the drill when it comes to the turkey season, which will end soon at Rumbleway.

“Most of our customers are trained well,” Way said. “If they want a turkey for Christmas, they order two now.”

Way hasn’t raised turkey prices, but has had trouble finding grit, a type of small granite stone that she says helps turkeys digest their food.

For Drew Kinohi of Kinohi Poultry in Davidsonville, Maryland, like other farmers, feed has been the primary disruption.

“There’s been a couple of times when we are stretching the last bag because the feed store’s order hasn’t come in yet,” Kinohi said.

Despite the challenges, David Haberkorn of Morris Hill Farm in Tracy’s Landing, Maryland, is proud of his pasture-based process, in which he said turkeys rotate to fresh ground.

Outside of prices and demand for turkeys, Haberkorn has seen another change in the run-up to this Thanksgiving.

“People are definitely more eager about the holiday than they were last year.”