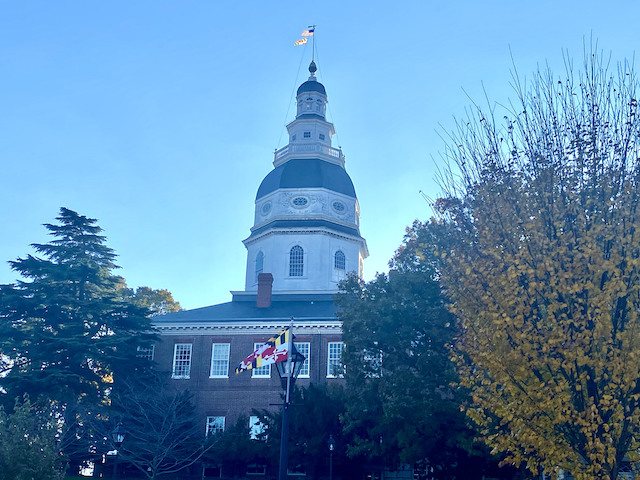 ANNAPOLIS, Md. — The historic dome atop the Maryland State House, and surrounding grounds and structures, is scheduled to get a revamp with a new $619,620 state contract.

On Nov. 3, the Board of Public Works agreed to dedicate money to “(Restoring) the exterior of the Maryland State House and grounds within State Circle, including stabilization and potential restoration of the Old Treasury Building,” according to the panel’s agenda.

The project will include two phases, according to Nick Cavey, the director of communications for the Department of General Services.

The first part of the project will focus on structural repairs to the dome related to water infiltration, painting, and window work, Cavey wrote in an email to Capital News Service. He said renovations will also ensure the dome has continuous protection from lightning and fire.

The second part of the project will center mainly around the State House and surrounding areas, according to Cavey.

The term of the funding for this project runs from November 2021 to February 2023. However, the project is estimated to take until late 2024, according to Cavey.

MCWB Architects, based in Albany, New York, was selected to complete the repairs. The state chose this firm for the project because they specialize in historical upkeep, according to the Nov. 3 Board of Public Works agenda.

MCWB has previously helped with renovation and preservation efforts of George Washington’s Mount Vernon, Thomas Jefferson’s Monticello, and James Madison’s Montpelier, according to the agenda.

Comments made on the agenda by the Department of General Services said that, “The firm also has specific and relevant experience working on four historic state capitols located in New York, Tennessee, Vermont, and Maryland. Within the Maryland State House, MCWB Architects successfully completed the restoration of the Old Senate Chamber and work on the restoration of the James Brice House,” a nearby historical home.