Having watched Wednesday’s Board of Public Works meeting online, how would you describe Comptroller Peter Franchot grilling of state education officials about a $1.9 million contract for standardized tests by the NCS Pearson firm?

A) A hissy fit

Based on the live streaming you saw, how did Comptroller Franchot describe this Iowa company?

How did Gov. Larry Hogan react to the comptroller?

B) Agreed with most of what he said

A) He would vote against the contract

B) Contract was “disservice to our kids”

C) Loss of federal funds was an “invalid threat”

NCS Pearson is a large Iowa-based company that produces standardized tests for school systems around the country. Pearson has gained recent notoriety as the lead contractor producing the PARCC tests (Partnership for Readiness for College and Careers) aligned with the new Common Core national curriculum standards.

Maryland heads up the consortium of states contracting with Pearson for PARCC tests using $186 million in federal dollars. There were once 23 states part of the consortium (Franchot used the figure 26) and now there are only nine, with states dropping out as they rejected Common Core or objected to Pearson’s practices.

“I think there’s a bigger issue about our state’s relationship with this company,” said Franchot.

Deputy state school superintendent Kristy Michel responded, “We’ve been with Pearson quite a while and have not had the same experiences” as other states.  “We do feel we’ve had better experiences.”

But as representatives from the State Department of Education patiently tried to explain, the one-year contract extension before the Board of Public Works was not about PARCC at all but about “the Alternate Maryland School Assessment test (ALT-MSA). an alternative learning assessment for students with significant cognitive disabilities who cannot participate in the general Maryland School Assessment (MSA) test even with accommodations.”

“It’s a much different assessment” than PARCC, said Michel.

Undeterred, Franchot read, or at least tried to read, a complicated question found on a 6th grade Pearson test based on an article in Smithsonian magazine called “Nimbus Clouds: Mysterious, Ephemeral, and Now Indoors.”

“As a result, the location of the cloud is an important aspect, as it is the setting for his creation and part of the artwork.  In his favorite piece, Nimbus D’Aspremont, the architecture of the D’Aspremont-Lynden Castle in Rekem, Belgium, plays a significant role in the feel of the picture.

“The contrast between the original castle and its former use as a military hospital and mental institution is still visible,” he writes. “You could say the spaces function as a plinth for the work.” 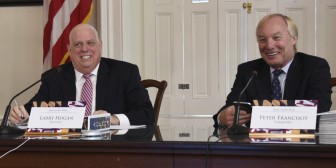 Gov. Larry Hogan and Comptroller Peter Franchot at the Aug. 5 Board of Public Works Meeting. Photo by the Governor’s Office.

More seriously, the governor said, “I share a lot of concerns that the comptroller has with respect to Pearson, PARCC, and over-testing. We still think we’re over-tested.” Hogan noted that he had signed into a law a commission to study and make recommendations about the amount of testing in public schools.

Michel told Franchot there was a possibility of losing hundreds of millions in federal funds for education of the disabled if the test were not given, and Hogan said he was concerned about that too. He was also “concerned about losing our waiver on No Child Left Behind” and “potentially violating the  civil rights of these severely disabled student.”

“Everything [Franchot] said, I agree with,” Hogan said. But “if we don’t do it, it could be worse.”

Michel said, “We’re asking for one year extension so we can figure out something else. This is a stop-gap one-year extension.”

Franchot scoffed at the loss of federal funds, noting it had never happened in Maryland, and Michel said it had only happened to Washington state, which is appealing the decision.

Franchot’s objections to the Pearson testing contract were overshadowed at the board meeting by an even longer discussion of the proposal to eliminate 63 positions in the human resources offices of the Department of Public Safety and Correctional Services.

Hogan supported Secretary Stephen Moyer’s plan, but several veteran state employees about to lose their jobs despite good performance evaluations tearfully pleaded for the state to find a better solution.

After extensive back and forth, Franchot moved that the board delay action on the plan for three weeks. When Hogan readily agreed, Franchot gave in on the Pearson contract and approved it, along with Hogan and State Treasurer Nancy Kopp.