Anne Arundel County Executive Steve Schuh, right, and other county officials took to kayaks Friday afternoon. They paddled three miles from the Beverly Triton Beach Park on the Chesapeake Bay to a boat ramp on the Rhode River to illustrate Schuh's plans for increasing public access to the bay and its rivers. Anne Arundel has 530 miles of coastline, the most of any county, but only one public boat ramp for 14,000 trailered boats registered in the county. Schuh put $592,000 in his budget to plan and develop eight new free public boat ramps in the county. Veteran kayak Ralph Heimlich, left, using a Greenland wooden paddle, towed Maryland Reporter the last half of the 90-minute trip.

HEROIN TASK FORCE RECOMMENDATIONS: Maryland will add treatment beds for heroin addicts on the Eastern Shore, boost law enforcement efforts to disrupt dealers and launch a public-awareness campaign about the dangers of addiction as part of an initial state response to a growing and deadly overdose epidemic, Josh Hicks is reporting for the Post.

DETENTION CENTER DETAINEES MOVED: State corrections officials have transferred the last detainees from the Baltimore City Detention Center, Gov. Larry Hogan said Tuesday, bringing an end to the decrepit jail, Luke Broadwater reports in the Sun. “The final closure of this detention center removes a stain on the reputation of our state and Maryland’s correctional system,” Hogan, a Republican, said in a statement. “For years, corruption, criminal activity, and deplorable conditions have plagued this facility, but that ends today.”

LEGGETT RECOUNTS POLICE HARASSMENT: Montgomery County Executive Ike Leggett, endorsing guidelines issued Tuesday by Maryland Attorney General Brian Frosh directing police to avoid racial profiling, told reporters the problem is real. Leggett, who is African American, said he was harassed by a police officer in Silver Spring as recently as November. He appeared with Frosh and others Tuesday at a news conference in Annapolis to introduce the guidelines developed by Frosh to end discriminatory policing, Michael Dresser reports for the Sun. 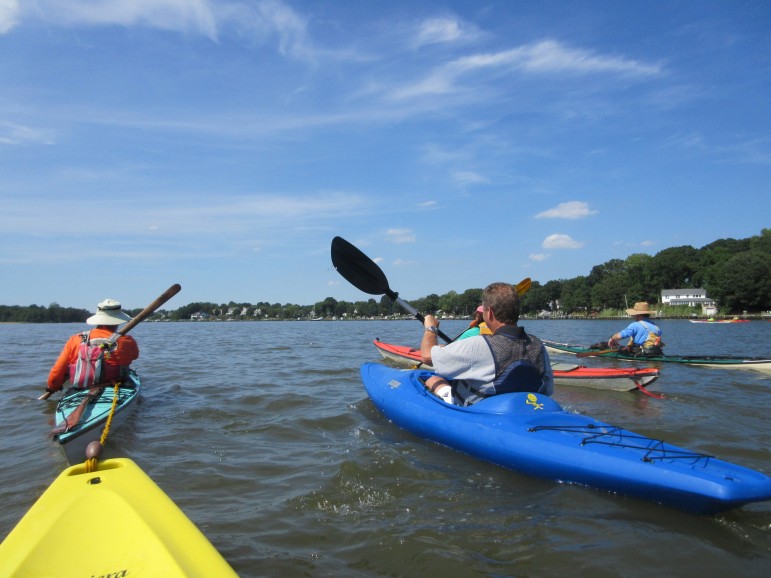 Anne Arundel County Executive Steve Schuh, in blue kayak, and other county officials took to the water Friday afternoon. They paddled three miles from the Beverly Triton Beach Park on the Chesapeake Bay to a boat ramp on the Rhode River to illustrate Schuh’s plans for increasing public access to the bay and its rivers. Anne Arundel has 530 miles of coastline, the most of any county, but only one public boat ramp for 14,000 trailered boats registered in the county. Schuh put $592,000 in his budget to plan eight new free public boat ramps in the county. Veteran kayaker Ralph Heimlich, left, using a Greenland wooden paddle developed by the Inuit people, towed the  Maryland Reporter the last half of the 90-minute trip.

REGULATORY REFORM: Randolph May of the Free State Foundation lauds Gov. Larry Hogan for undertaking regulatory reform, adding that not all regulations are bad and need reforming. But, he writes for MarylandReporter.com, the state needs to focus on the regulatory process and more frequent review of regulations.

JOBS NUMBERS UP: Daraius Irani, of the Regional Economic Studies Institute of Towson University, in a commentary for MarylandReporter.com, writes that jobs numbers released Aug. 21 gave Marylanders a reason to celebrate this past July’s activity. The revision of the June job numbers moved figures from an initial loss of 6,200 jobs between May and June to a loss of 3,400 jobs. However, July preliminary job estimates reported a 9,200 job increase from June to July.

LATE HISTORIAN HONORED: Maryland State Archives in Annapolis will be honoring Lois Green Carr, a pre-eminent scholar of the Colonial Chesapeake region before she died June 28 at the age of 93. In 1956, Carr began work at the archives, then located on St. John’s College campus. In 1967, she became the historian for Historic St. Mary’s City, a position she held 45 years, mostly working from the archives. She led research to document the lives of every known 17th-century St. Mary’s resident, Tim Prudente writes for the Annapolis Capital.

EYES ON CARDIN: Six weeks after President Obama announced a nuclear deal with Iran, Maryland’s two U.S. senators, Barbara Mikulski and Ben Cardin, have still not said whether they support it or not. Cardin’s decision is worth watching more than Mikulski’s since he became the ranking member on the Senate Foreign Relations Committee, writes Josh Kurtz in his column for Center Maryland. (Demonstrations are planned in Baltimore today urging Cardin to support the deal.)

MANUFACTURING TAX CREDIT: A tax credit that could last up to 10 years for new and expanding manufacturing businesses in Frederick County is under consideration by the County Council, writes Paige Jones for the Frederick News Post. The proposed commercial and industrial tax credit would be available to manufacturing, fabricating and assembly businesses expanding in or moving to Frederick County. To qualify for the tax credit, businesses must invest at least $5 million and create 25 full-time jobs, according to county documents.