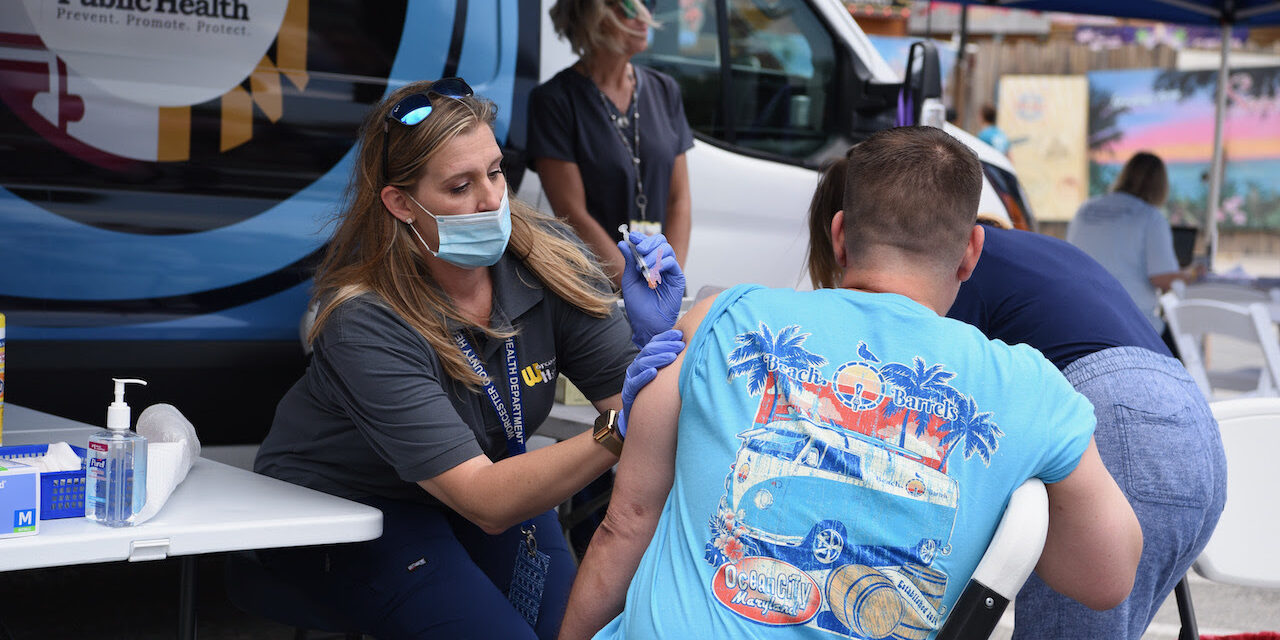 Shots for shots: A patron gets vaccinated at Seacrets bayside bar and nightclub in Ocean City May 28 during a visit by Gov. Larry Hogan. Anyone who received a COVID-19 vaccine was given a voucher for savings on their favorite dish, beverage or merchandise. It was part of a tour bringing mobile clinics and vaccine outreach to cultural and community events, bars and breweries, and popular destinations across the state. Governor’s Office photo

ANNAPOLIS, Md. — Over two weeks into vaccine eligibility for 5- to 11-year-olds, all local school and health systems in Maryland have agreed to facilitate clinics, and vaccination rates are climbing.

Nearly 80,000 children, or 15% of those in that age group, have gotten their first doses, according to Maryland Department of Health data as of Friday. Vaccinations for 5- to 11-year-olds made up 44% of all vaccinations statewide since Nov. 3.

Montgomery County hit the ground running with clinics starting Nov. 4, as well as 12 clinics at schools the first weekend smaller kids were eligible -- Nov. 6 and 7 -- according to the county's Department of Health and Human Services public information officer Mary Anderson.

Montgomery County increased its seven-day daily average for first doses of all ages to over 2,500, an increase of 325%, from the week before eligibility opened to the first week after, according to the latest available Maryland Department of Health data on Nov. 17.

The county has administered 73,500 first doses per 100,000 residents, ranking second in the state, according to the same data.

Anderson said on a phone call that the clinics were purposefully held in areas where many parents may not have means to get to the county's established COVID-19 vaccination clinics.

"These schools know their communities best," she said, and teachers helped target vaccine appointment outreach to parents who might be less tech-savvy or may not have a computer at home.

Contract nurses from Athena Consulting have staffed most of the school-based clinics in the county, Anderson said, after school nurses staffed clinics early in the pandemic but returned to caring for sick schoolchildren.

Some schools' parent-teacher associations have made their own partnerships with local nonprofits to staff clinics, Anderson said, including Holy Cross Hospital in Silver Spring.

Anderson said in the second week of vaccinations, there was a dip in the amount the county received compared with the preceding week and administrators had to reduce the availability at some clinics.

According to the Centers for Disease Control and Prevention, Maryland has received the third-most vaccine from the federal government per 100,000 residents of any state, as of Thursday.

Schrader also said it was too early to draw conclusions on racial or socioeconomic disparities in vaccine uptake across the state among younger children, and that the state health department would reserve judgment until three or four weeks into the rollout.

"We made it clear that we believe school-based clinics are the most efficient and effective way to provide equitable vaccinations to 5- to 11-year-olds," Schrader said, and that the state needs to maintain momentum as holidays and colder weather approach.

Sen. Jim Rosapepe, D-Prince George's and Anne Arundel, who serves on the Senate Vaccine Oversight Workgroup, said to Capital News Service that he expects the first 20% or 30% of younger children to get vaccinated quickly since a majority of adults from all ethnic groups have gotten the vaccine.

Kent County saw a supply dip from the first to the second week, but its health officer, Bill Webb, said to give the situation two months, when he expects there will be "more than enough (doses) in the community for everyone who wants it."

Webb said the supply is similar to that of the beginning of adult vaccine roll-out in Kent County.

A portion of a jurisdiction’s vaccine doses are allocated according to its population relative to the rest of the state.

"Five or six months down the road, we had vaccinated all who wanted it and had a supply of inventory to work on promoting vaccinations. I'm fairly confident this will play out the exact same way," Webb said in a phone call.

Kent County increased its seven-day average for first doses of all ages by 133% to about 20 daily vaccinations the first week of 5- to 11-year-old eligibility, according to the latest available Maryland Department of Health data.

Vaccine is delivered in containers of 100 doses, Webb said, which is still too much for Kent County's limited number of primary care providers to use up before the vaccine expires in 31 days in a normal fridge. Instead, doses are transferred from county supplies to physicians when they're needed.

Children 5 to 11 years old are only eligible for the Pfizer vaccine and get a third the dose of an adult. Like adults, they get two vaccinations, three weeks apart. Webb compared the dosage of vaccine for younger kids to an 8-ounce soda versus a 20-ounce soda for adults.

Webb called 5- to 11-year-olds the last group that is more mobile and more easily able to spread the virus, and said that vaccinating them will help keep kids in school, reduce quarantining and cut back on isolation events.

"I'm keeping my fingers crossed that if we do well with this last group, we can put COVID-19 into the history books," Webb said.