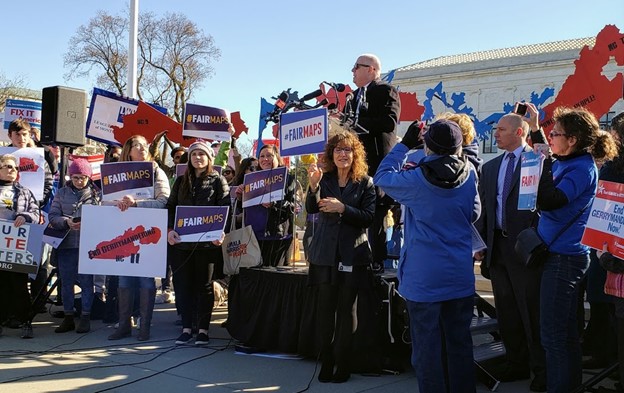 Gov. Larry Hogan at a rally for Fair Maps and redistricting reform in Laurel. Signing interpreter Carrie Quigley is in the center foreground. Photo by Howard Gorrell.

“Direct citizen involvement, sunlight, and fair districting standards have proven their worth in other states. I hope everyone who cares about democracy in our state will consider volunteering to serve on the commission, making your voice heard by way of public comments and hearings, or even filing proposed maps.” Co-chair Walter Olson of Maryland Citizens Redistricting Commission on January 12.

“That was so much fun!! Wow! Maryland is a mess!!! So many little areas next to others in different districts… Wow… West Virginia just 3 huge ones… Very educational!” exclaimed Carrie Quigley after playing puzzles on three states, Wisconsin, Maryland, and West Virginia, in the Slate’s weekly puzzle to save democracy, “Can You Put These Gerrymandered States Back Together?”

Preparing for testifying before the Senate Committee on Reapportionment & Redistricting in October 2011, I discussed with Carrie Quigley, an interpreter holding a specialist certificate assigned by the Department of Legislative Reference, what I would testify.

After obtaining a reserved seat from a United States Supreme Court’s marshal, Quigley interpreted for me during the March 26, 2019 hearing of the Maryland redistricting case, Benisek v. Lamone, inside the land’s highest court, which was the first time for her to interpret there. After eight years of learning, she was well-educated about gerrymandering and redistricting.

Three months later, on June 27, the United States Supreme Court ruled that claims of unconstitutional partisan gerrymandering are not subject to federal court review. Disappointed by this ruling, Gov. Larry Hogan said, “I pledge to vigorously continue this fight, both in Maryland and across our nation. Gerrymandering is wrong, and both parties are guilty.”

The Supreme Court also ruled that federal courts have no power to stop state legislators from drawing districts along partisan lines and diluting votes for their opponents.

Surprisingly, on Jan. 12 this year, Hogan signed an executive order creating a citizen redistricting commission. The Maryland Citizens Redistricting Commission lacks the authority to draw binding maps but can make recommendations. The commission does put redistricting in the public eye.

Citizens are encouraged to participate

This citizen-drawn plan was tested for the Governor’s Emergency Commission on Sixth Congressional District Gerrymandering (2019). On Jan. 6, 2019, in Maryland Reporter, Planning Department Secretary Robert McCord said, “The public can create accounts and submit plans electronically. It’s a 21st century way to do it.”

Last April, I reached Walter Olson, co-chair of the Emergency Commission, and asked him whether the public could propose the 2021 redistricting plans online? He wrote, “The Emergency Commission served as a sort of pilot project for trying out the sorts of impartial and transparent procedures that Maryland should use in drawing its maps in 2021. Aside from requiring that maps not be adopted for the benefit of any party or candidate and that compactness and respect for local government boundaries be observed, the commission rules provided for extensive public participation, including public map submission, along with public streaming and archiving of commission discussions.” Olson paused, “These should be part of any 2021 redistricting effort.”

How many citizen plans were submitted to his 2019 Commission? Olson answered, “In all 28 plans were submitted. Because of near-duplicates and other issues, the number of distinct actual citizen submissions of maps that would be legally valid on population, etc., was probably closer to a dozen.” 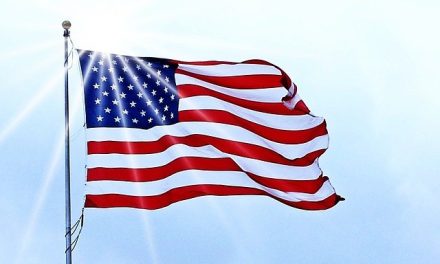