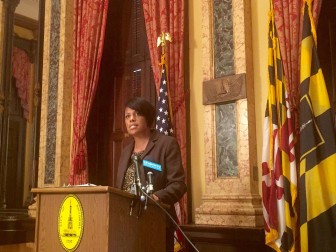 There’s nothing quite as emblematic of Baltimore City’s failed leadership as the out-of-town (yet again) mayor firing her long-serving and super-loyal city solicitor for lacking a crystal ball.

Once again, Mayor Stephanie Rawlings-Blake threw someone under the bus rather than take ultimate responsibility for an embarrassment to her administration. She didn’t even have the courage to handle the firing herself.

It gets worse. It turns out Rawlings-Blake has refused for over two years to talk or meet with the now-former city solicitor, George Nilson, her top legal adviser since she ascended to Baltimore’s top elective office.

The more we learn about the inner workings of the Rawlings-Blake administration, the more grateful we are that she is retiring in less than four months.

Remember this was the mayor who out of arrogance and stubbornness refused for hours to take urgent phone calls from Gov. Larry Hogan, Jr. to discuss calling out the National Guard to quell the 2015 Baltimore riots.

This was the mayor who after the unrest had died down fired her police commissioner because she needed a convenient scapegoat.

This was the mayor who forced out the previous police commissioner who had been widely praised for trying to reform the department by emphasizing community policing.

This was the mayor who bears partial responsibility for the damning Department of Justice report on the sad state of the city’s law-enforcement agency and the community’s deep mistrust of the men and women in blue.

What a mess Rawlings-Blake is leaving in her wake.

Her inability to work constructively with the City Council has empowered that inept group of lawmakers to strike out in directions that could cripple Baltimore’s economic and fiscal future.

Her pointless and counter-productive feud with Baltimore Comptroller Joan Pratt cost Baltimore millions in wasteful spending on an antiquated telephone system that should have been efficiently replaced years ago.

Her on-going alienation from the Republican governor helps explain his unwillingness to be supportive of a deeply distressed and ailing Baltimore City.

It’s become a shameful record that started out so promising.

Rawling-Blake’s latest self-inflicted wound is the firing of City Solicitor Nilson, whose lengthy record of civic and public service to the state and city deserved more than an insulting, back-of-the-hand dismissal by a mayoral assistant.

What set off the mayor was the discovery by the Southern Poverty Law Center that a contract lawyer for the city for the last six months had past ties to a neo-Nazi group. Nilson quickly terminated the lawyer but that wasn’t good enough for the mayor. She needed to lay the blame on someone else.

Nilson was the obvious candidate since he hired Glen Allen, a retired lawyer with a long record of solid legal work for one of the nation’s largest law firms. How was Nilson (or the law firm for that matter) to know of Allen’s dalliances with neo-Nazism or his personal political beliefs?

By asking Allen at his application interview about his political leanings? By checking with the Southern Poverty Law Center on every hire? Until that group discovered Allen’s neo-Nazi connections it was a well-kept secret that had not interfered with Allen’s impeccable legal career.

Does this mean all future city hires under this mayor will be asked:

“Are you now or have you ever been a member of a hate group, terrorist organization or some obnoxious political affiliate?

“Do you believe Sharia law supersedes the U.S. Constitution?

“Do you look favorably upon National Socialism?”

This is what it would have taken to spot Allen’s dark secret. Such questioning at a job interview for a government position not only would be inappropriate, it likely would prompt a lawsuit from the American Civil Liberties Union.

Rawlings-Blake was way off-base in using this one instance of misplaced trust as an excuse to fire Nilson.

He’s carried a ton of water for the mayor during her tenure, just as he did for former Mayor Sheila Dixon. Yet he was canned without even a thank-you.

In his earlier careers as deputy state attorney general and as an assistant attorney general, Nilson proved a rock of stability in providing sound legal judgment for generations of state leaders in both the legislature and executive branch.

He continued that service in the private sector, often chairing reform commissions to make the city and the state better.

But Rawlings-Blake didn’t even have the decency to tell Nilson herself that he was being fired or to explain why she felt compelled to let him go. She never asked to hear his side of the story. She refused his request for a meeting.

She was disrespectful and cruel toward an official who had done so much to give her sound and supportive legal guidance.

What a terrible ending for both of them.

Nilson, though, can return to the private legal sector where he’ll easily triple or quadruple his city pay grade.

Rawlings-Blake, on the other hand, is damaged goods. Her latest display of heartless avoidance of responsibility won’t help her legacy or efforts to resurrect her career in some national capacity.