REJECTED RX POT FIRMS SEEK ANSWERS: At least two rejected Lower Shore applicants are demanding more answers and a fuller explanation about how the Natalie M. LaPrade Medical Cannabis Commission settled on its picks. Jeff Siskind is a top investor in a CannaMed Pharmaceuticals, which is looking to grow and process medical marijuana at a former Hebron manufacturing plant. It bought the land and the building for nearly $1 million earlier this year and began hiring staff. It did not receive one of the prized approvals, Jeremy Cox reports for the Salisbury Daily Times. “We were the team that were much farther out than anyone else,” he said.

UTILITIES MUST NOTIFY ON SHUTOFF: Beginning this week, utilities in Maryland are required to take more steps to notify residents and local governments when they shut off service to a home for alleged theft, the Maryland Public Service Commission announced.The new requirements follow the deaths last year of eight family members from carbon monoxide poisoning in their Eastern Shore home, Jessica Anderson writes in the Baltimore Sun. 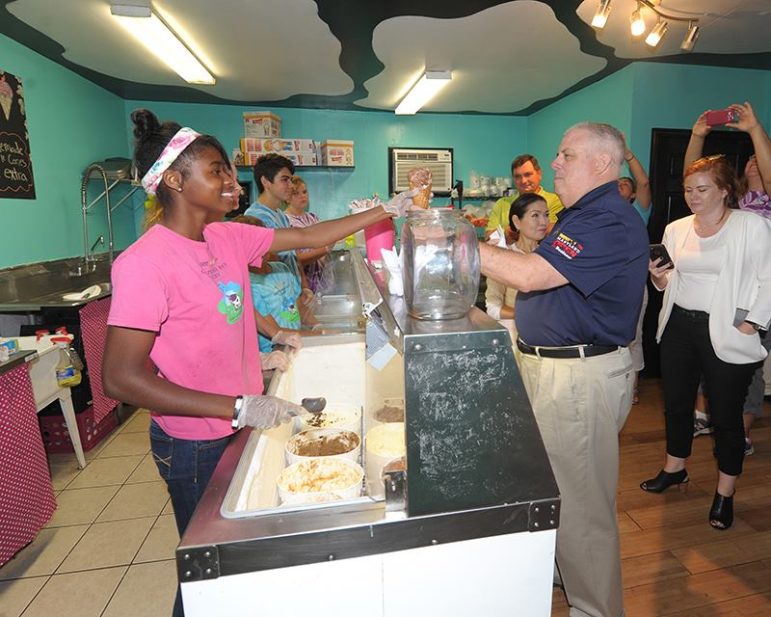 Lots of important stuff goes on in connection with Maryland Association of Counties meeting. Here, Gov. Hogan gets a chocolate cone at the Chesapeake Bay Ice Cream Store. From his Facebook page.

MILLER SCHMOOZES REPUBLICANS: It might have shocked some Marylanders to see Senate President Mike Miller, a man reviled by many Republican voters, hanging out and schmoozing at a reception thrown by GOP senators. But it didn’t surprise anyone familiar with the way Miller has done business in his 30 years of leading that chamber, writes Michael Dresser in the Sun.

GOVERNING AT THE BEACH: Maryland’s annual beach-side conference of governing and politicking is underway in Ocean City this week, drawing nearly all the top executives from each county, scores of state and local lawmakers, administrators and Gov. Larry Hogan, Erin Cox writes in the Sun.

JUDGE CANDIDATE’S ETHICS VIOLATION: A commission has found one of Anne Arundel’s candidates for Circuit Court judge was guilty of an ethics violation for her work in Washington. Claudia Barber had faced a complaint from a former Fifth Circuit Court judge that her candidacy in Anne Arundel’s elections violated the code of ethics governing administrative law judges in Washington. Barber, the first African-American woman to be on the ballot for the position, was an administrative law judge during her primary bid, Phil Davis reports in the Annapolis Capital.

STATE GIVES CITY SEWER GRANTS: The AP is reporting in the Daily Record that Baltimore will get more than $20 million in grants to help prevent sanitary sewer overflows. Maryland’s Board of Public Works approved the Bay Restoration Fund grants on Wednesday. The Maryland Department of the Environment said in a news release that the grants will help Baltimore improve the existing sanitary sewer infrastructure in the Patapsco and Herring Run sewersheds.

STATE GRANTS TO ADDRESS SEXUAL ASSAULT: WYPR-FM is reporting that Gov. Larry Hogan is pledging at least $1 million in grants to help groups that serve victims of sexual assault in Baltimore after the Justice Department found the police department’s responses to sexual assault “grossly inadequate.”

MORE VOTING MACHINES: With high voter turnout expected on Nov. 8, local election boards across Maryland are getting prepared with some extra equipment, CJ Lovelace reports for the Hagerstown Herald Mail. The state Board of Public Works in Annapolis on Wednesday approved more than $1 million in contracts for expanded resources. That amount included $674,525 to secure more equipment for use by the state and 19 local election boards, as well as $405,363 to update software used by the election machines.