POLICE LEGISLATION, CHANGES EXPECTED: Baltimore City Del. Jill Carter expects more police accountability legislation to be considered next year in the Maryland General Assembly, as a result of of the Justice Department report critical of the Baltimore City Police. Carter told Maryland’s News This Week at WBAL-AM that the Legislative Black Caucus will take the lead on the legislation to call for greater police accountability, though the specifics need to be worked out.

HOGAN TO ROLL BACK SEPTIC, TRANSIT REGS: Gov. Larry Hogan said Saturday that his administration will roll back an O’Malley-era regulation on septic systems and demanded that the General Assembly repeal a new transportation law he dubbed “the road kill bill.” Michael Dresser reports for the Sun that in a speech that turned combative at times, the Republican governor said that today the Maryland Department of the Environment will issue a new regulation allowing counties to permit septic systems that are less than the best available technology to be installed on properties outside environmentally critical areas.

RX POT PERSONALIZED: John Kelvey of the Carroll County Times writes about a family’s struggles with a father’s illness and how medical marijuana has helped.

MD’s KNOWLEDGE GAP: With Maryland announcing its first round of cannabis dispensary licenses, patients with certain medical conditions will soon be able to obtain cannabis to treat their chronic pain. But, according to a report in the Daily Record, are physicians sufficiently educated to know when to counsel their patients on whether medical marijuana will be an effective treatment for their condition?

CHANGES TO 911: Only one thing is certain when it comes to how Maryland residents call for help: The numbers 9-1-1 will remain the same. Everything else is likely to be different in just four short years, and no one yet knows how much it will cost, reports Bryan Sears in the Daily Record.

DEL. IMPALLARIA CHARGED: Del. Rick Impallaria (R-Baltimore County) was arrested Thursday in Ocean City and charged with driving while impaired, according to court documents. Josh Hicks and Fenit Nirappil write that records from the District Court of Worcester County show that police stopped Impallaria, a proponent of stricter drunken-driving laws, about 8:15 p.m. Thursday.

CELEBRATING MD’s OLYMPIANS: Gov. Larry Hogan said Saturday that he hopes to host a celebration of Maryland’s Olympic athletes. Speaking to reporters after the annual Maryland Association of Counties conference in Ocean City, Hogan boasted of the strong showing by Maryland residents at this year’s games in Brazil, writes Natalie Sherman in the Sun. 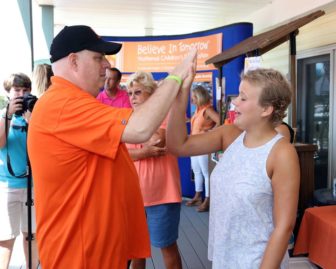 Gov. Larry Hogan high fives Madison Friz, whom he got to know as a fellow cancer patient, at the Believe in Tomorrow house in Ocean City. Governor’s Office photo.

HOGAN TOURS CHILDREN’s CHARITY: Gov. Larry Hogan started his day Friday with a stop that brought back vivid memories of his fight against non-Hodgkin’s lymphoma. He visited the Believe in Tomorrow Children’s Foundation’s House by the Sea, which offers free lodging at the beach resort to families dealing with the serious illness of a child, reports Michael Dresser for the Sun.

TRUMP FINDS MARYLAND BASE: Twenty years ago, when thousands of people still drove past his gas station every day on their way to make steel and cars, Carl Hobson put up signs for Democrats, writes John Fritze in the Sun. Now the 77-year-old displays one of the largest “Trump” signs in this blue-collar community. The “Make America Great Again” slogan is impossible to miss under the price for diesel.

GOP SPEECHWRITER ON TRUMP: Pat Warren of WJZ-TV interviews Republican speechwriter and former Ehrlich operative Richard Cross on his decision not to vote for his party’s presidential nominee, Donald Trump.

SRB’s FAILED LEADERSHIP: In a column for MarylandReporter.com, political pundit Barry Rascovar writes that, once again, Baltimore City Mayor Stephanie Rawlings-Blake threw someone under the bus rather than take ultimate responsibility for an embarrassment to her administration. She didn’t even have the courage to handle the firing herself. … The more we learn about the inner workings of the Rawlings-Blake administration, the more grateful we are that she is retiring in less than four months, Rascovar says.

CHARITY HONORS SPEAKER RYAN: Aaron Kraut of Bethesda Beat reports that A Wider Circle, the Silver Spring-based nonprofit that provides furniture, job training and other services to impoverished people around the region, will honor Speaker of the House Paul Ryan at its annual fundraising gala next month. The group’s President and CEO Mark Bergel wrote on Friday that, “By recognizing Congressman James Clyburn (a Democrat) and Speaker Paul Ryan (a Republican), we are not endorsing all of their policies,” Bergel wrote. “We are, however, recognizing two individuals who are addressing poverty as a central issue in our country.”