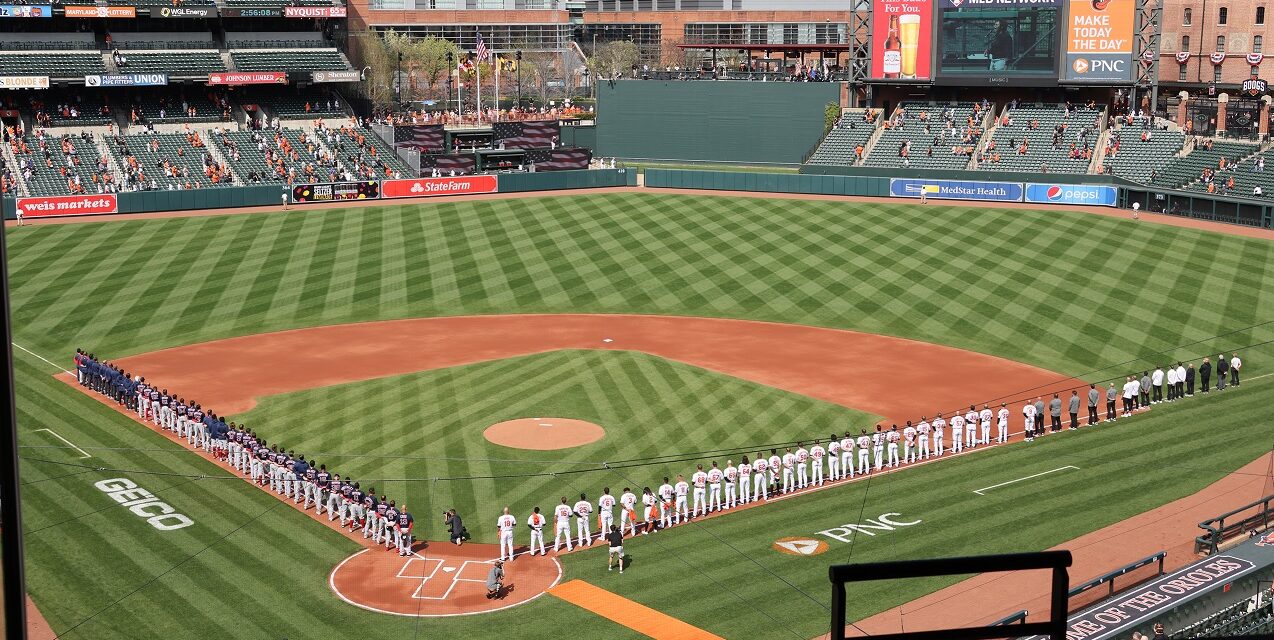 The Orioles will get a rent credit for reconfiguring the left-field wall at Oriole Park at Camden Yards. This photo was shot at opening day in 2021. Governor's Office photo

HOGAN EYES POLICE REFORM BILLS: Maryland’s lawmakers representing both sides of the political aisle said Thursday that they believe it is likely that Gov. Larry Hogan will veto all or part of a package of five landmark police reform bills that the General Assembly recently approved, Bryan Renbaum reports for Maryland Reporter. Should Hogan decide to veto the legislation, it is considered likely that the veto will be overridden given that Democrats have a near-supermajority in both the House of Delegates and the Senate.

SPORTS BETTING COMES DOWN TO WIRE: The House and Senate are still far apart in the details of setting up sports betting in the state, Bryan Sears reports for The Daily Record. The negotiations are causing delays as the end of session approaches.

BUSINESS STARTUPS SURGE: Even as businesses closed and employees lost jobs, the pandemic sparked an unexpected trend, the Capital News Service reports in Maryland Reporter. The number of business startups is surging across the U.S., and especially here in Maryland.

HOGAN VETOES JUVENILE SENTENCING BILL: Maryland Gov. Larry Hogan on Thursday vetoed a bill that abolishes life without parole sentences for juvenile offenders, saying for some crimes stricter penalties are necessary, Pamela Wood and Bryn Stole report for the Sun. The veto will likely result in an override vote in the final days of the annual General Assembly session.

PAROLE PROCESS BILL FACES HURDLES: A bill that would remove the governor from the parole process is on a bumpy path through the Maryland Legislature, Kimberly Seif reports for the Capital News Service in The Frederick News-Post. Both chambers have different versions of the bill that must be hammered out in just a few days.

GARRETT COUNTY RESIDENTS HESITANT TO DRIVE TO MASS VACCINATION SITE HOURS AWAY: The state is allocating COVID-19 vaccine doses for Garrett County residents at the distribution site in Hagerstown, but only seven Garrett County residents have been willing to make trips that could exceed four hours, Joseph Hauger reports for the Garrett County Republican. Seven more mass vaccination sites will open this month, but none of them will be located west of Hagerstown.

EXONOREE COMPENSATION BILL CLOSE TO LAW: A bill is one step away from becoming law to make it easier for those wrongfully convicted to obtain compensation, Eddie Kadhim reports for WMAR.

MORE MENTAL HEALTH ACCESS FOR TEENAGERS: Del. Kumar Barve cast his vote for a bill that allows children 12-16 to get mental health treatment without parental consent in honor of an uncle he never met, Ovetta Wiggins reports for the Post. Sudhakar Shankar Gokhale, Barve’s mother’s twin brother, died by suicide in the 1940s.

EMERGENCY SPENDING REFORM CLOSER TO PASSAGE: Maryland lawmakers are close to approving tighter rules for emergency purchases by the state government, Pamela Wood reports for the Sun. The bills follow high-profile problems with the purchase of coronavirus tests from a South Korean company and masks and ventilators from a politically connected company.

ELECTION REFORM IN SENATE: The Senate is getting pressure to pass “historic civil rights legislation” that would change how some counties select their commissioners, aiming to ensure that votes cast by minorities in those counties are not overrun by a county-wide majority, Bennett Leckrone reports for Maryland Matters.

COVID-19 CASES IN THE SCHOOLS: COVID-19 cases are up in Anne Arundel public schools, but schools officials say they aren’t spreading within schools and are coming from the outside community, Rachel Pacella reports for the Capital Gazette. About 100 staff and students are quarantined due to a contact, and at least 100 people connected to athletics are quarantining due to a contact.

LAWS IMPACTING BUSINESS COMMUNITY PENDING: Holden Wilen with the Baltimore Business Journal gives an update on where legislation stands for business as the General Assembly nears its last day of session.