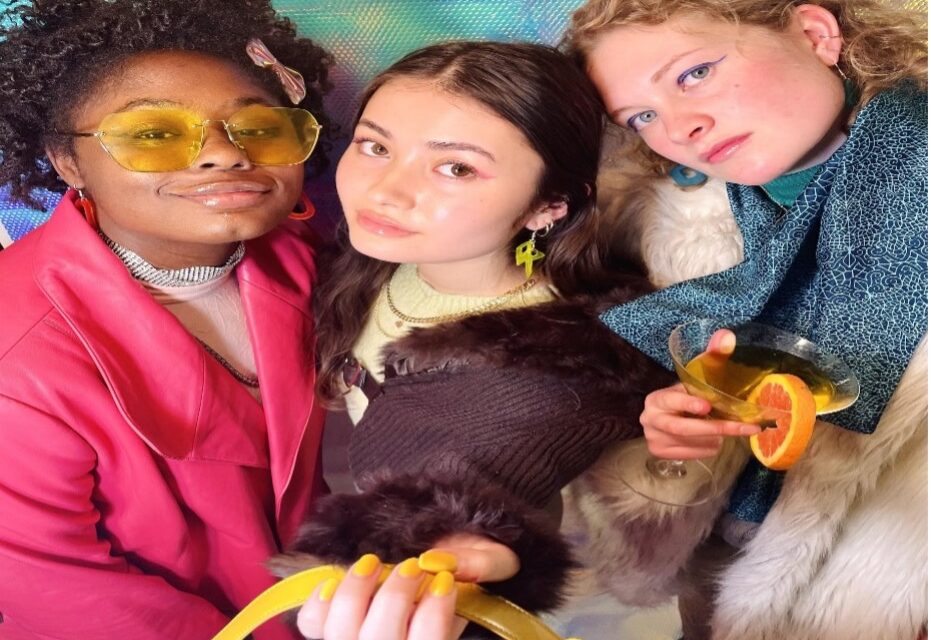 The Mo.Na jewelry team. From the left, co-founders Mecca McDonald and Mia Dunn along with team member Andrea Thurnheer. (Photo by Mecca McDonald)

As the COVID-19 crisis ravaged the U.S. economy, countless numbers of businesses shut down and millions of Americans lost jobs.

Yet, the pandemic sparked an unexpected trend: The number of business startups is surging across the U.S., and especially here in Maryland.

From April to December of last year — a period when much of the nation was closed due to the pandemic — there were 3.5 million applications for new business formations filed in the U.S., up 34% from the same period in 2019, according to the U.S. Census Bureau. For the full year, applications totaled 4.4 million, up 24%.

In Maryland, the number of startups grew even faster. New-business applications totaled 80,550 from April to December, up 42% from the same period in 2019.

Applications both in the U.S. and Maryland spiked in January, then slowed in February, the latest month for which data are available. Still, applications remain at higher-than-average levels.

Anirban Basu, CEO of Sage Policy Group Inc., an economic consulting firm in Baltimore, said some new business owners are people who lost jobs during the economic crisis and went back to work by becoming their own bosses.
“Necessity is the mother of invention,” Basu said. “Many people decided to create their own opportunities during the pandemic.”

Changes in business protocols during the pandemic also played a role in the rise of startups, according to Holly Wade, director of research at the National Federation of Independent Business, a small business trade group.

Limitations on in-person work “created a lot of opportunities,” for enterprising individuals who were able to take advantage of those changes, she said.

At the same time, being stuck at home — away from the office or college campus — gave some people extra time to pursue business endeavors.
That group includes Neal Singal, a student at Georgetown University, and two partners, who used their downtime from campus to establish Global-Pal Inc., a mobile app that helps groups of people share payments in restaurants, bars, and various travel destinations. The app quickly determines who owes what amount on a bill. 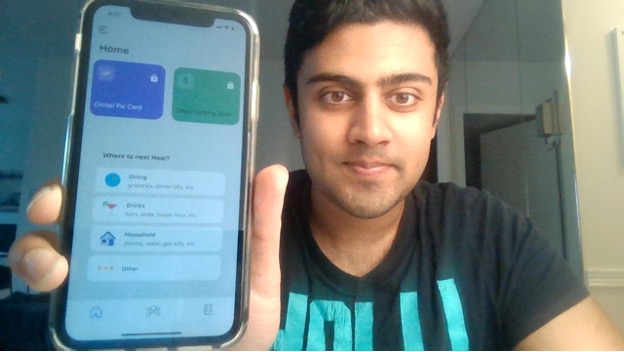 “In our app, we convert that receipt into digitized information and everyone in the group can select what they purchased or what they’re responsible for and we calculate what their share is and send requests instantly,” said Singal.
He and his partners began the construction of the app last June and launched the business in January.

The company is based in Washington, D.C., but was partly funded by the Johns Hopkins University’s fuel accelerator program in Baltimore, which helps later-stage companies with customer development and investor readiness. Global-Pal also received funding from Georgetown and from angel investors.

Singal credited the pandemic for helping spur the development of Global-Pal.
“A lot of us were indoors, next to our computers, so we (could) spend a lot of time learning a lot about” financial technology. “Building the app is one challenge, but the other challenge is banking and regulatory environments and how to regulate payments through an app. Had it not been for COVID some of us might not have had the time to learn about these things,” he said.

While the data suggest that a wide variety of businesses were formed last year, Basu at Sage Policy Group said many are focused on e-commerce, online marketing and internet data security.

Mo.Na. (short for mother nature) was founded by Mecca McDonald and Mia Dunn, students at Johns Hopkins. The idea behind the company was to “combat some of the plastic waste that the fashion industry produces annually,” said McDonald.

Mo.Na.’s earrings are made of bioplastic, which is renewable biomass made from starch.

McDonald is majoring in psychology and economics, while Dunn is majoring in chemical and biomolecular engineering. “The idea of Mo. Na. was originally Mecca’s idea and she asked me if I could help her with the research and development stuff,” said Dunn.

With a small grant from the University, the partners began working on the concept in May 2020 but didn’t get a perfect product until December. The company launched in late February at www.mothernaturesgem.com. 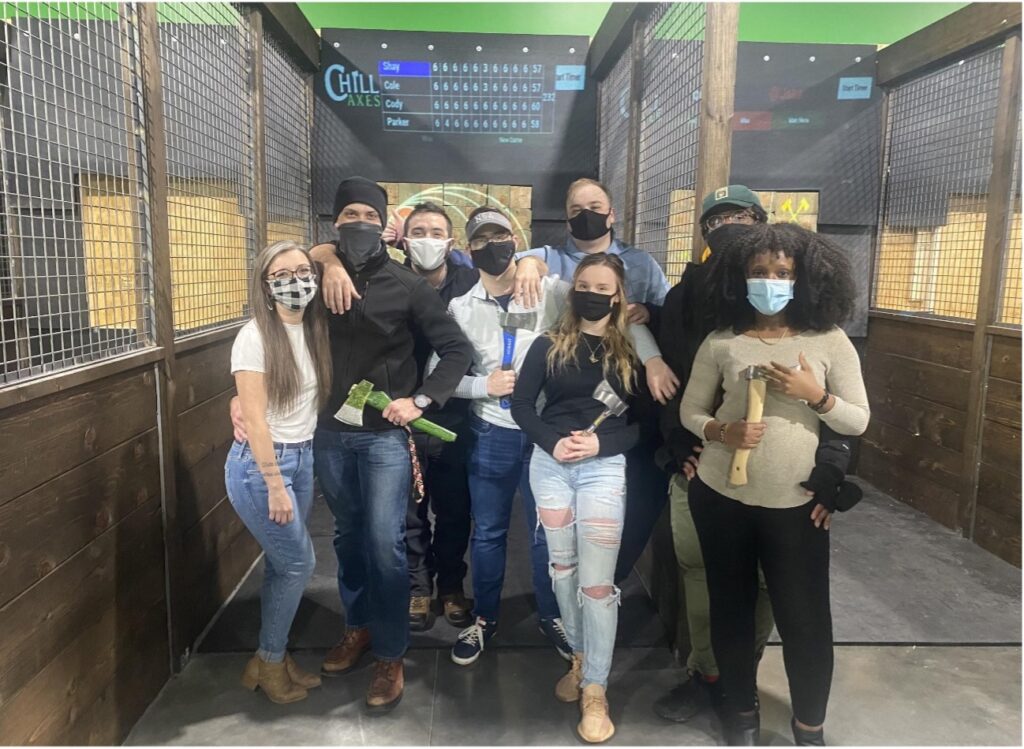 The Chill Axes staff in front of an axe throwing alley. (Photo by Stacy Berver)
Hilaria Kwakumey stands in the middle of her new salon in Frederick, Maryland. (Photo provided by Boss Hair Salon.)

Despite social-distancing rules, some new startups veered into the entertainment arena. One such business is Chill Axes in Crofton, Maryland, a venue where groups of patrons compete in the sport of throwing axes at a target. It’s similar to throwing darts, but more extreme.

“In March of last year, we started writing a business plan and once the business plan came together we applied for a small-business loan. And then in either June or July, when this restriction started lifting a little bit, we were able to start going out and looking at real estate,” said Stacy Berver, the owner of Chill Axes.

“I don’t think when we started, we realized that (the pandemic) was going to last as long as it has,” Berver added, noting that her business didn’t open until early this year.

The location has 14 throwing lanes, each of which can accommodate five people.

“We feel very encouraged by the numbers that we’ve seen,” she said, adding that the place was packed during its first weekend.

Lucky for Berver, her lease has a clause that provides a sharp rent reduction as long as the pandemic lasts.

Not all new businesses are finding quick success.

The Frederick native was laid off last spring from her human relations job at HMSHOST, a highway and food service company. She figured “what better time than now to consider opening a salon.”

She said she felt “I will never have the opportunity again.”

After finding space for her salon and hiring stylists, she opened in November.
Unfortunately, she quickly learned the difficulties of opening a business during a pandemic.

“It’s been very hard to gain new clientele just because people are not doing their hair as often as in the past.”

Nevertheless, she’s happy that she was able to follow her dream. “If the pandemic hadn’t happened, I probably wouldn’t have opened the shop,” Kwakumey said.

Auditors, Montgomery register of wills at odds over fitness program