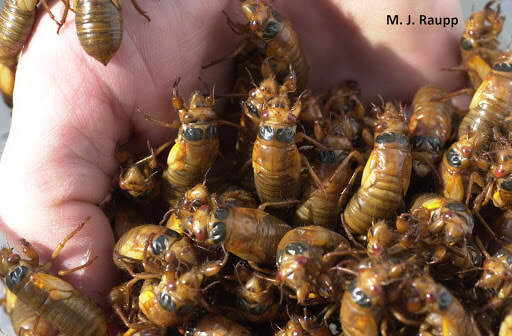 Michael Raupp is holding a group of newly emerged cicadas known as nymphs. (Photo Credit: Michael Raupp and the University of Maryland)

Brood X, a new generation of cicadas, will begin to show up in Maryland in the next few weeks,  after a 17-year-long hiatus.

These periodical cicadas  — cicadas that emerge every 17 years — are only found along the eastern half of the United States.

The red-eyed, “straw-nosed” bug will begin to show up as early as late April, will fully emerge by the beginning of May and last until June.

Michael Raupp, professor emeritus of entomology at the University of Maryland, said this will be one of the largest groups of cicadas the states have seen.

“It’s called the Great Northern Brood,” Raupp told Capital News Service. “There will be literally billions, if not trillions, of these periodical cicadas emerging more or less simultaneously.”

This brood of cicadas are found in 15 states, ranging from Georgia to Northern Virginia, as well as along the state of Mississippi, Raupp said.

During their hibernation period, these cicadas have been feeding off the liquid found on plants and leaves known as sap, experts said.

“Their immature stages, which we call nymphs, feed on a liquid diet,” Raupp said. “When the adults emerge they will also feed on this same fluid.”

After the bugs emerge from the ground, typically at night, they will fly to vertical structures and shed their skin, Raupp said. By the next morning, their exoskeleton will have hardened, and they will be able to fly, leading them to the treetops, he continued.

This is where the noise begins, the distinct mating calls of cicadas are some of the reasons most people find these bugs annoying, according to experts.

According to Raupp, the cicada’s sound levels can get as high as 80 to 100 decibels, which is the volume of a lawnmower or a jet aircraft going by.

During their time in Maryland, they will become a delicacy to many animals and even some people, cicada experts said.

These bugs are highly nutritious and high in protein.

Even though there is a lot of anticipation for the new wave of these unique bugs, there are also some negative connotations that come with them.

Dawn Biehler, associate professor in the department of geography and environmental systems at the University of Maryland, Baltimore County, who studies the social impacts and cultural connotations of insects, said she’s gotten different responses from the anticipated invasion.

Biehler said Marylanders are either excited about the opportunity to reconnect with these bugs or they aren’t looking forward to one more thing adding to the tumultuous year.

“People get really grossed out about the way they emerge from the ground, they seem like zombies in a way,” she said.

Biehler recommends that Marylanders prepare themselves by learning a little bit more about the bugs in advance or prepare for another couple of months of isolation.

Raupp also recommended that Marylanders cover their small trees and shrubs from the cicadas with netting gear.

“They are going to damage the branches,” Raupp said. “The trick here is the netting should have a mesh size of one centimeter or less, that’s about three-eighths of an inch.”

Raupp stressed that these bugs are a natural phenomenon, so there should be more of an embrace for these bugs than hatred.

“It only happens a few times in your lifetime, so get out and enjoy these things,” Raupp said.

After combining all the ingredients together, bake them in a greased loaf pan at 350 degrees Fahrenheit for about an hour.