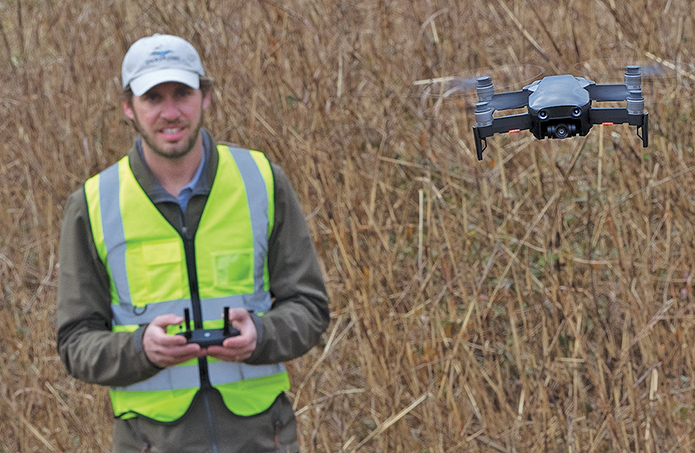 Riverkeepers, researchers and volunteer monitors have long kept an eye on water quality from the ground and from the river. But, with the help of technology that’s suddenly far more accessible, they’re taking to the skies, too.

Unmanned aerial vehicles, also called UAVs or drones, have recently become so affordable and easy to fly that they are winding up in the hands of more environmentalists.

Pipeline opponents and watchdog groups are a perfect example.

“The technology has come along to the point where everyday people can put a camera up in the air and see beyond the tree line or their property line,” said Ben Cunningham, Virginia field coordinator for the Pipeline Compliance Surveillance Initiative, a program that is training volunteers to use drones to keep tabs on controversial natural gas pipeline construction projects.

With the help of this equipment, he said, they’ve created an oversight system that is often “superior to what regulators have at their disposal.”

The Federal Aviation Administration predicts that about 7 million hobby and commercial drones will be sold in 2020 — nearly three times the 2.5 million sold in 2016.

The fast-growing fleet of drones includes small, sophisticated airplanes and quadcopters that, in some cases, are as easy to pilot as a remote-controlled car. Outfitted with auto-piloting functions and the ability to record images through a smartphone screen, some basic models start at less than $200, with advanced versions beginning around $1,000.

In the Chesapeake Bay watershed, volunteers are getting licenses for drones in order to track the construction of natural gas pipelines.

Researchers are using them to measure the growth of Bay grasses and detect the presence of harmful algal blooms in the summer.

Riverkeepers are using the flyers to keep an eye on industrial facilities and take stunning footage of the waterways they’re working to protect.

Many of the Chesapeake region’s riverkeepers regularly use drones to help identify sources of pollutants, collect evidence for legal cases and regulatory complaints, or create promotional videos about their work.

“We could potentially get all of the riverkeepers together and have not only a Navy but an Air Force at this point,” said James Riverkeeper Jamie Brunkow.

Choptank Riverkeeper Matt Pluta agreed. He said it’s become known around the Chester and Sassafras rivers he oversees that the riverkeepers have a drone, “so it’s been pretty effective so far.”

Pluta has used the drone to track the expansion of Bay grass beds to ensure they are being protected. He also used it to showcase a two-stage ditch his organization helped construct on the edge of an agricultural field in Talbot County to reduce pollution in nearby waterways.

In the footage shared on social media, the drone provides a bird’s-eye view of the altered ditch designed to slow and filter nutrient-rich runoff before it reaches the river.

“The drone has allowed us to capture these projects in a way that we were not able to in the past,” Pluta said.

A drone expert in the Upper Potomac

Upper Potomac Riverkeeper Brent Walls has become the resident drone expert among some riverkeepers, many of whom have purchased the equipment in the last year or two. Walls has been flying drones for at least three years and navigating remote-controlled gadgets since childhood.

Walls recently upgraded his personal drone to the DJI Mavic Pro, which starts at about $800, and he uses it frequently for work. He even found floating footwear for the drone that allows it to land on the water — a product he’s shared with other riverkeepers.

On a January day, Walls mounted a 360-degree camera beneath his camera-equipped flyer to create a ride-along experience for Facebook followers while he navigated the drone over a snow-lined Antietam Creek.

“Being able to see something from the air gives you a whole new perspective,” Walls said. “The whole point of social media is to keep people engaged so when you need them to act — to write a letter or show up at an event in force — they’re there. This is one tool I use all the time.”

In the past, Walls would have to hire commercial pilots to gather aerial imagery or to keep an eye on an industrial facility he suspected was polluting a nearby waterway.

Now, he can get a drone up in the air and over the facility within a few hours. Sophisticated drone software makes it easy to edit videos on a smartphone and post them online as soon as they’re made.

Walls used the drone this summer to help Shenandoah Riverkeeper Mark Frondorf track the source of pollution that caused a sudden algae bloom in the river. Recently, the drone has helped Walls track oil seeps from a power plant and keep tabs on a mining facility’s stormwater pond, which he suspects wasn’t properly constructed.

But flying the expensive equipment, especially near privately owned facilities, isn’t for the faint of heart — or the untrained.

Getting an FAA license

Walls maintains a drone pilot license (Part 107) with the FAA to use the equipment in a businesslike or legal capacity. Hobby flyers who navigate their aircraft in a public park don’t necessarily need a license, but Walls encourages volunteers working for environmental causes to get one.

That additional training has given him confidence about where it is and is not legal to fly his drone and ensures that the images he captures will be admissible in court should they become helpful for a legal case.

He also abides by a personal code by steering clear of residential areas and not interfering with any operations occurring on the ground or in the air.

“I want my toy to come back every time it goes up,” Walls said.

Cunningham, with the Pipeline Compliance Surveillance Initiative, also requires all of his volunteers to acquire the FAA’s drone pilot license, particularly if they plan to collect images to be used in court or regulatory cases. So far, he’s trained more than a dozen volunteers to use their drones to monitor construction of the Atlantic Coast Pipeline, which began in West Virginia last year before it was halted in late 2018.

Donglai Gong, an assistant professor at the Virginia Institute of Marine Science, said researchers are just beginning to test how drones can expand their work.

He and others at VIMS use drone imagery to measure the reach of submerged aquatic vegetation, harmful algal blooms and oil spills — all of them more visible and measurable from overhead when the conditions are right.

In the very near future, Gong hopes to deployed more advanced technology to not only measure but also identify different plant species from far above the water’s surface.

For the last two summers, Gong has used midlevel drones to measure the breadth and movement of algal blooms in the York River, where the resultant reddish brown tint is clearly visible from overhead.

Once a bloom was spotted, Gong’s team collected samples by boat to determine the algal species, then deploy a drone to see how far it was spreading.

And soon that final hand-sampling step will be unnecessary. VIMS is in the process of acquiring new sensors, ranging in price from $40,000 to $70,000, that will allow the equipment to both identify and measure algal species from the air.

That technology is getting more accessible every day. Walls, the Upper Potomac Riverkeeper, plans to use thermal camera imagery this year to measure how heated water discharges from power plants are impacting cool-temperature streams, for example.

“[Drones are] a wonderful tool,” Dong said. “They can allow you to look at a problem or an issue from different perspectives – literally. You just have to make sure you do it safely and legally.”