DRUG TREATMENT: Sen. Bobby Zirkin is supporting legislation to cut wait times in a program that lets judges send criminal offenders to treatment. The legislation would require the state to drastically reduce the wait for such inmates, which averages 167 days and can reach a year and a half. Supporters also hope to make probation and treatment — not jail — the standard response to most drug possession charges, writes Michael Dresser for the Sun.

UM MERGER: Legislation to combine the University of Maryland, College Park and the University of Maryland, Baltimore is garnering support among some local business leaders who say the plan could stimulate economic development in the city, reports Carrie Wells for the Sun. But a sticking point has emerged over a provision in the bill that would allow the university system’s regents to appoint one president when one of the two campus presidents leaves his job.

CAMPUS GUN BAN: School policies generally forbid bringing guns to Maryland’s public colleges and universities, but lawmakers in Annapolis are considering a bill to make that practice the law – and attach a criminal penalty, Daniel Leaderman reports for the Daily Record.

KILLING SOME CRIMINAL PENALTIES: Maryland lawmakers heard conflicting testimony Tuesday on whether the state would benefit from eliminating criminal penalties for low-level narcotics possession, with some witnesses claiming the change would encourage more drug use, while others said it would put addicts where they belong — in treatment, reports Josh Hicks for the Post.

EVALUATING TRANSIT PROJECTS: Maryland’s transportation secretary called on legislators to forgo the adoption of a formula to rank projects around the state in lieu of a panel that could develop a system that would allow for fair competition for state transportation dollars. Transportation Secretary Pete K. Rahn made his comments during a more than two-hour House Appropriations Committee hearing Tuesday on House Bill 1013, which supporters say would make the process more transparent by imposing a scoring system on projects similar to one used in Virginia, Bryan Sears of the Daily Record reports. 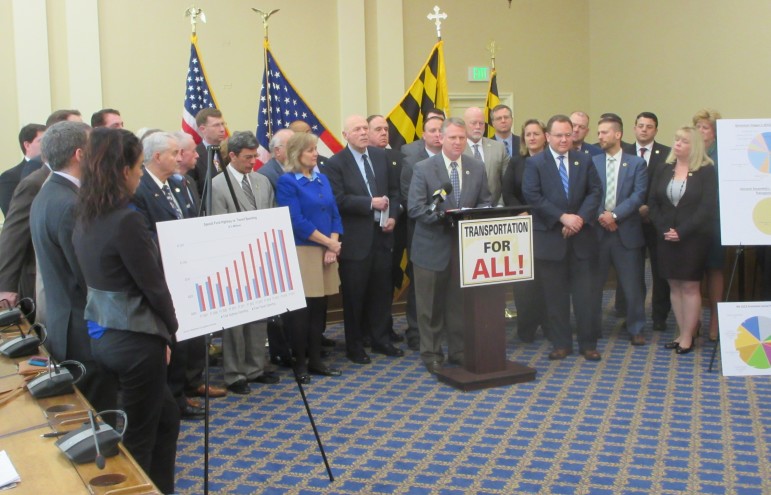 THEY ARE LISTENING: The Maryland Senate on Tuesday delayed action on a bill that would clamp down on when public buses and trains can record the private conversations of their passengers. “What [the Maryland Transit Administration] is doing is a mass surveillance,” said Sen. Bobby Zirkin. Zirkin said he wanted his Senate Judicial Committee to address an amendment offered by some of those who are concerned about costs associated with the bill, reports Ovetta Wiggins in the Post.

CLASH ON RCC BILL: Legislation that would change when Maryland’s Republican Central Committee members take office has state Sen. Bryan Simonaire, R-Pasadena, at odds with the state’s Republican Party leadership. At just a couple of paragraphs of text, Senate Bill 669 seems innocuous enough. But in a hearing last week, it ignited some spirited back-and-forth debate, Amanda Yeager reports for the Annapolis Capital.

SENATE GIVES EARLY OK TO TEEN PARTY BILL: The Maryland Senate on Tuesday gave preliminary approval to a bill that stiffens penalties on adults who provide alcohol to underage drinkers, report Ovetta Wiggins and Josh Hicks for the Post. Under the bill, a person who provides alcohol to someone younger than 21 could go to prison for up to one year, be fined up to $5,000, or both for a first offense. They could receive two years of incarceration, a $7,500 fine or both for a second or subsequent offense. Current law carries a fine of $2,500 and no jail sentence.

HARRIS VOTES AGAINST ANGELOU P.O.: U.S. Rep. Andy Harris became the center of controversy on Tuesday when he voted with eight of his Republican colleagues against naming a post office in North Carolina after poet and civil rights activist Maya Angelou, John Fritze reports in the Sun.

TRONE’S MONEY: In announcing his candidacy for Congress in late January, Total Wine & More co-owner David Trone of Potomac vowed to spend “whatever it takes” to come out on top in the race for the Democratic nomination in District 8. With today marking exactly eight weeks until the April 26 primary, it is clear Trone is putting his money where his mouth is, reports Louis Peck for Bethesda Beat.

BAD BUDGET TIMES IN PG: Lagging tax revenue is failing to keep up with expenses in Prince George’s County, according to a report released Tuesday, and if nothing is done to fix it, the government could face a $250 million budget hole by 2022, Arelis Hernandez of the Post reports.

LIQUOR BOARD IN BALTIMORE CITY: If Baltimore City community leaders and other critics thought it would be easy to get the Democrat-dominated Maryland legislature to help them oust the three city liquor commissioners appointed by the Republican governor, they found out otherwise Monday night, reports Fern Shen for Baltimore Brew. Weeks of lobbying by community associations and tough talk by city senators – followed by an hour of at times harsh questioning – all seemed to evaporate when the most powerful person in the Senate rose to speak favorably about the embattled Liquor Board.

GOP PRES CAMPAIGN QUANDRY: The state of the Republican presidential primary is more like a wrestling match than a race for the White House, former Pennsylvania Gov. Tom Corbett said at the annual Lincoln-Reagan Day Dinner Tuesday in Annapolis. “What’s happened to the Republican presidential campaign?” Corbett asked. “For me personally … it’s kind of hard to watch. It really is hard to watch Fox, CNN, I can’t even go near MSNBC.” Meredith Newman writes the story for the Annapolis Capital.