STATE REVENUES DOWN: Maryland’s economy isn’t doing nearly as well as state officials had hoped. Erin Cox of the Sun writes that Comptroller Peter Franchot announced Tuesday afternoon that revenue collection is down $250 million from the estimates used to build the budget last year. Wages did not rise as much as expected, nor did how much people spent. While employment increased, most of the new jobs were low paying ones, Franchot said.

A THIRD BAY BRIDGE SPAN? The Sun’s Erin Cox reports that Gov. Larry Hogan said Tuesday that the state will spend $5 million and up to four years studying where to put — and how to pay for — a possible third span across the Chesapeake Bay. The study is the first in a multi-stage process to seek federal funding. It would likely be many years before any construction could begin, if ever.

INSURANCE HIKES EXPECTED: Consumers who aren’t covered by employer insurance plans, or earn too much to qualify for Medicaid, will face steep premium increases in the Individual Market averaging 28% higher than last year under the Affordable Care Act, if the Maryland Insurance Administration approves the proposed hikes, Charlie Hayward writes in an analysis for MarylandReporter.com.

ON SCHOOL START DATES: WYPR-FM’s Fraser Smith and Bryan Sears of the Daily Record talk about the politics of Gov. Larry Hogan’s plans to fulfill a long-standing desire of Comptroller Peter Franchot to keep schools closed until after Labor Day and Hogan and Franchot’s “bro-mance.”

NORTHROP GRANT DELAY: The fate of a $20 million grant Maryland promised as an incentive to keep defense giant Northrop Grumman in the state is up in the air and has become embroiled in a separate spending dispute between Gov. Larry Hogan and state Democratic leaders, Josh Hicks reports for the Post. The General Assembly approved the funding for Northrop Grumman as part of this year’s state budget. But its Legislative Policy Committee still must sign off on the terms of the agreement.

BALTIMORE POLICE REFORM: Kevin Rector of the Sun writes that as the U.S. Justice Department and city officials negotiate sweeping reforms of the Baltimore Police Department, community leaders and civil liberties advocates are preparing for a parallel fight. The activists say they expect the city’s powerful police union to use its collective bargaining agreement with the city and state laws that limit the ways in which police officers can be disciplined to block progress. 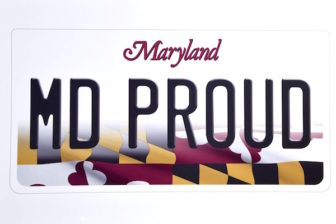 SITTING JUDGE DROPS RACE: Judge Eric H. Nyce has dropped out of the race to keep his seat in Prince George’s County Circuit Court, after finishing last among the five nominees in the April primary, Arelis Hernandez reports for the Post. Nyce, 56, sent a letter to the Circuit Court earlier this month saying he would not run in November’s general election. Circuit Court judges in Maryland are appointed by the governor but must be elected by voters in the next election cycle.

CUMMINGS SEEKS FBI PROBE INTO HACKS: Rep. Elijah Cummings of Baltimore and other House Democrats called Tuesday for the FBI to investigate whether Donald Trump’s presidential campaign has any connection with cyber attacks on political entities in the United States, John Fritze of the Sun reports. Though the lawmakers presented no evidence of a link, they wrote in a letter to FBI director James Comey that “serious questions have been raised about overt and covert actions by Trump campaign officials on behalf of Russian interests.”