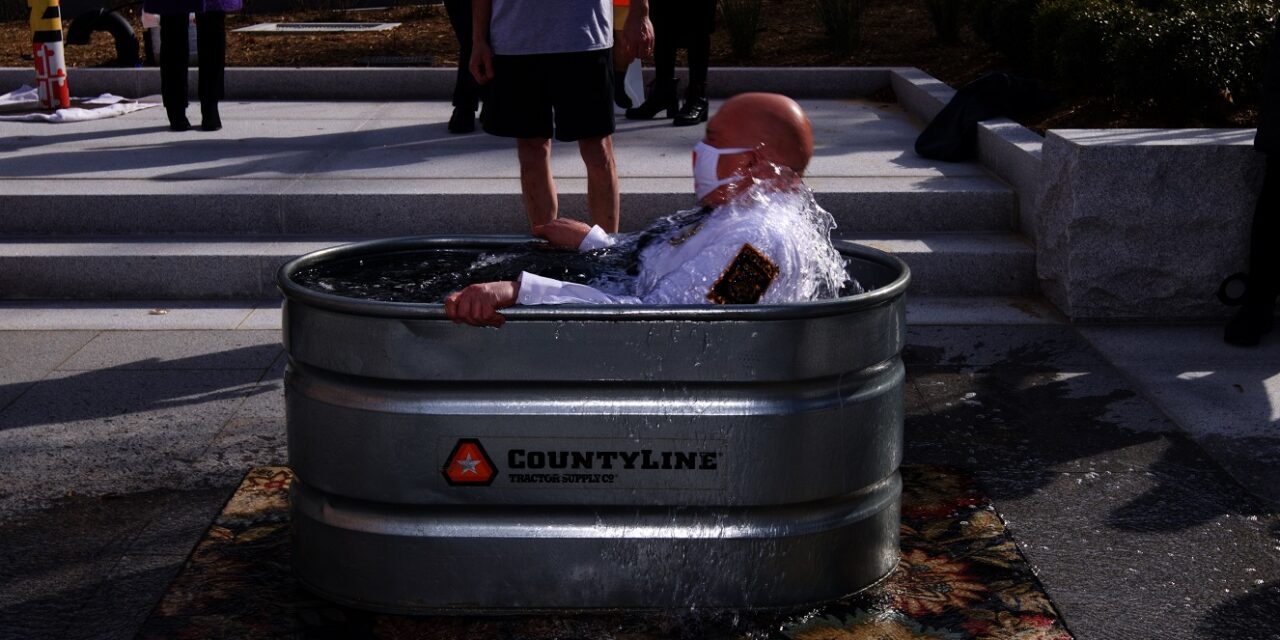 With the annual Polar Bear Plunge at Sandy Point State Park on the Bay cancelled due to the pandemic, Gov. Larry Hogan took the plunge on Lawyer's Mall Friday. The event raises money for Special Olympics. Governor's Office photo by Joe Andrucyk

STATE URGES RESERVE FOR 2nd VACCINE DOSES: Maryland’s acting health secretary, Dennis Schrader, on Tuesday said health care providers should hold in reserve enough COVID-19 vaccine to administer second doses to people who have already received one shot — rather than using their supply to give more people their first inoculation against the infectious disease, as some have recommended, Hallie Miller and Meredith Cohn of the Sun report.

B’MORE ASKS STATE FOR EXPAND VAXX ACCESS: Baltimore Mayor Brandon Scott called on the state Tuesday to expand access to coronavirus vaccinations for people who live and work in the city as Maryland prepares to open its first mass vaccination site in the city, Emily Opilo of the Sun reports.

HO CO GETS 66% FEWER VAXX DOSES OVER PRIOR WEEK: The Howard County Health Department was set to receive 2,000 doses of the COVID-19 vaccine this week from the state, a 66% reduction from the previous week, according to Maura Rossman, Howard County’s health officer, Ana Faguy of the Howard County Times reports. This reduction is caused by the state Department of Health broadening distribution of the vaccine to additional providers, including hospitals, retail pharmacies and large group practices.

OPINION: VACCINE ROLLOUT IS ‘HUNGER GAMES’ FOR HEALTH CARE: The editorial board of the Sun opines that “If we needed any more indication that the Maryland vaccination rollout has been an utterly, confusing mess, we got news Monday that there may not be enough doses for people to get their second shots. … Marylanders have lost all confidence in the rollout, with many comparing it to a version of “The Hunger Games’ — a survival of the fittest competition.’

LOCAL LEADERS ASK HOUSE TO OVERRIDE HOGAN DRUG BOARD VETO: Maryland’s county and city leaders teamed up on Tuesday to urge the General Assembly to override Gov. Larry Hogan’s veto of legislation that would establish a permanent funding source for the Prescription Drug Affordability Board. The Senate voted to override the veto in  January, Bryan Renbaum of Maryland Reporter writes.

MORE ON RACIAL EQUITY IMPACT: When Maryland lawmakers weigh bills on changing policing practices and reforming criminal justice, they’ll have extra information to consider on racial equity. The General Assembly is starting a pilot program that will give lawmakers expert analysis on whether bills would result in disparate harm — or help — to different segments of the population, Pamela Wood of the Sun reports.

ANTI-BIAS PROGRAM COULD BE PART OF HATE CRIME LAW: Kimberly Seif of Capital News Service, in a story that appears in Maryland Reporter, writes that judges will be allowed to require people charged with hate crimes to complete anti-bias education programs if a bill to expand the current Maryland hate crime law is passed.

STUDY FINDS DEVELOPMENT AROUND RAIL STATIONS LACKING: Increasing development around rail stations in Prince George’s and Anne Arundel counties could add thousands of transit-friendly jobs and homes while generating tens of millions of dollars in new tax revenue, according to a study released Wednesday by the Greater Washington Partnership, Katherine Shaver of the Post is reporting. The report cited seven Metro and MARC commuter rail stations with untapped potential for high-density “transit-oriented development.”

BILL SEEKS EQUAL ACCESS TO BALLOT: A Maryland lawmaker wants all of the state’s voters to mark their ballots with devices rather than by hand, arguing that the move would make voting more equitable for people with disabilities, Bennett Leckrone of Maryland Matters reports.

ARUNDEL COUNCIL OFFERED VAXX, SAY NO: The Anne Arundel County Council has been offered coronavirus vaccines under the “continuity of government” provision of the rollout, but not all councilmembers intend to be inoculated now, reports Olivia Sanchez for the Capital Gazette. The council hasn’t met in chambers since March, and some members say because they are not currently public-facing, they should allow seniors and residents with high-risk health conditions go first.

MORE WA CO STUDENTS TO RETURN TO SCHOOLS: Washington County Public Schools is still planning to return many students to in-person learning starting Feb. 16, Julie Greene reports for the Hagerstown Herald-Mail. The school system affirmed Tuesday night its plan to resume in-person learning at Stage 4, which would allow more students to return to classrooms than the Stage 3 the school system was operating under until mid-November, when everyone reverted to virtual learning.

OPINION: KOREAWAY SIGNS DON’T REFLECT COMMUNITY’s DIVERSITY: Angie Boyter in a column for Maryland Reporter opines that there “is a disturbing state initiative to put two Korean-style structures 12-feet tall and 8-feet wide bearing a Koreatown sign in the right-of-way on Route 40 in Ellicott City. … However … My nearby community of Dunloggin welcomes neighbors from Nigeria, India, Pakistan, Ukraine, Turkey and South America, among others (even from Anne Arundel County) … International Town might be a good designation …”

FORMER BROADCAST INSTITUTE OWNER JOHN JEPPI DIES AT 83: John C. Jeppi Sr., the former owner of the Broadcasting Institute of Maryland who covered sports for radio years ago, died of COVID-19 pneumonia Jan. 17 at his Mays Chapel home, The former Ruxton resident was 83, Jacques Kelly of the Sun reports.