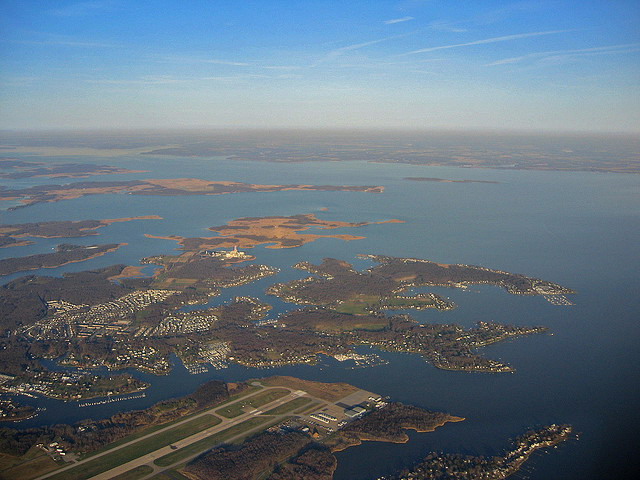 View from Martin State Airport toward the Chesapeake Bay. Photo by Crazy Diamond.

Gov. Larry Hogan last month announced yet another study of a third span across the Chesapeake Bay.  The study is expected to cost $5 million and take up to four years.  Its goal is to determine the appropriate site for a third span and how to pay for it.

Gov. Hogan’s announcement came with the Governor William Preston Lane Jr. Bridge (aka the Bay Bridge) in the background.  The setting suggests that the third lane will be built at the current Sandy Point site. Maryland would be well served, however, by building the next bay crossing from Baltimore County to Kent County.

The 2006 report from the Task Force on Traffic Capacity Across the Chesapeake Bay, like every other before it, has pointed to multiple Bay crossings.

The Task Force was a collaborative effort by leading elected officials from around the state and included public input from Anne Arundel, Calvert, Dorchester, Kent, Queen Anne’s counties.

The Task Force divided the Bay into four zones.

The existing Bay Bridge is four miles long, with a clearance of 186 feet in height, and a main span of 1,600 feet in length.  This is needed to accommodate a channel width of 1,500 feet and the massive ships that travel up the Bay to the Port of Baltimore.

Zone 1 is called the “historic” northern crossing because it is the original route planned in the early 1900s.  It was intended to stretch from Baltimore to Tolchester Beach in Kent County.

Advantages of the northern crossing

A northern crossing need not meet the same dimensions as the Bay Bridge. Shipping arriving in Baltimore from the north is limited by the height of existing crossings and the channel width of the Chesapeake and Delaware (C&D) Canal.  For example, the William V. Roth Bridge over the C&D Canal has a clearance of only 100 feet.  So the main span of a northern bridge across the Chesapeake Bay most likely would not need to be higher.

In addition, the C&D Canal is only 127 feet wide.  The shipping channel width between Baltimore and Kent counties is 600 feet wide, so, the main bridge span could be much shorter than the Bay Bridge.

A smaller main span allows flexibility in design.  For example, the Roth Bridge is a cable-stayed bridge.  This design has suspension cables from the bridge piers down the center of the bridge that resembles two golden sails and provides passengers unobstructed views.

A bridge with a shorter, lower main span has benefits other than aesthetics.  It could offer pedestrian and bicycle lanes, potentially with access to Hart-Miller Island.

Public safety is a consideration too.  A bridge with a height of 100 feet would not be as enticing to jumpers as the 186-foot high Bay Bridge. Diversifying our bay crossings is also smart from a homeland security perspective. Having all bay crossings in one location leaves them vulnerable to blockage, either through natural or manmade disaster.

The 2006 Task Force report showed that a northern crossing would reduce current Bay Bridge crossings by 40,000 cars on a summer weekend and 25,000 cars on an average weekday.  While it will require significant cost to improve roads on either side of the Bay for a northern crossing, road improvements to support another span at Sandy Point won’t be cheap.

Route-50 is six lanes wide and has choke points at the Severn River and Kent Narrows bridges.  In addition, I-97 and MD-2 are at capacity and are pouring into Rt.-50. Route-50 and Rt.-18 on Kent Island are maxed out too. How much wider can those roads and bridges get?

Some will say that Kent County is too environmentally sensitive to support a Bay crossing.  Others will say that a bridge will change Kent County’s rural character and add traffic to historic Chestertown.

Why should historic Annapolis get any less respect than Chestertown? Isn’t Queen Anne’s County’s environment and rural character precious too?

Nobody wants major transportation infrastructure in his or her backyard.  In 1947, then-Gov. Lane created the sales tax to pay for the bridge that bears his name.  The sales tax and bridge were so unpopular that it cost Gov. Lane his reelection. But the bridge helped unite Marylanders and bring economic opportunities to residents of the Eastern Shore.

It is clear that Maryland needs a third span across the Chesapeake Bay. A crossing from Baltimore County to Kent County should get serious consideration.

Columnist Michael Collins was heard earlier this week on WBAL radio discussing his MarylandReporter.com column advocating a third Bay bridge between Baltimore and Kent counties. Listen to the four-minute audio by clicking here

Michael Collins can be reached michaelcollins.capital@gmail.com

What is Montgomery Reporter?