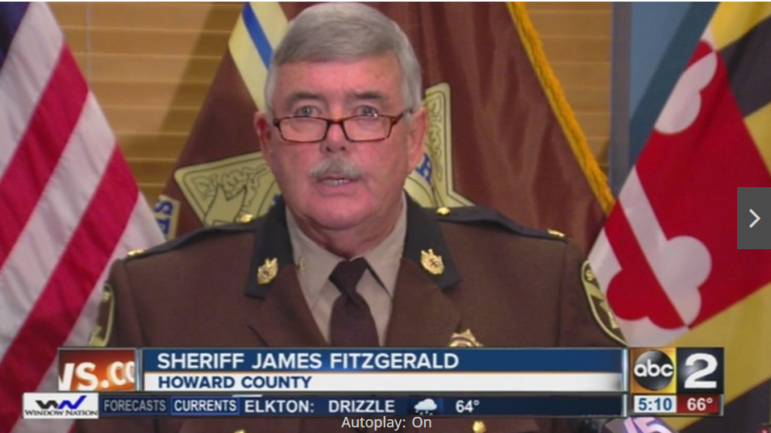 SHERIFF’s IMPEACHMENT ON TABLE: Leaders in Howard County are taking steps to remove embattled Sheriff James Fitzgerald from office after he said Thursday that he won’t resign over allegations he used foul and racist language to belittle and threaten employees, Pamela Wood of the Sun reports. Howard County Executive Allan H. Kittleman asked the county’s representatives in Annapolis to investigate whether the General Assembly can impeach Fitzgerald.

INVESTIGATING MORHAIM: Fenit Nirappil and Aaron Gregg report in the Post about Del. Dan Morhaim’s involvement in both legislation to legalize medical marijuana and his involvement in a company that hopes to dispense the drug. They have obtained detailed in emails that shed light on the contact the Maryland Medical Cannabis Commission had with Morhaim, whose legislative colleagues are scheduled to meet Oct. 19 to decide whether to investigate the lawmaker’s dual roles.

2nd RX POT FIRM FILES SUIT:  A second company has asked to join the lawsuit against the Maryland Cannabis Commission, alleging that it too was unfairly denied a lucrative license to grow medical marijuana. Maryland Cultivation and Processing filed paperwork Wednesday to jointly sue the state commission with GTI Maryland, Erin Cox writes for the Sun.

A FREER STUDENT JOURNALISM: Freedom of speech is about to get a bit more free for students across the state. As of Saturday, a new law — Senate Bill 764 —goes into effect in Maryland. The guidelines focus on freedom of expression in student journalism. Not everyone in the Carroll County school system is totally onboard, reports Emily Chappell for the Carroll County Times. “We do think it’s important that students have a journalism opportunity in high school,” Carroll’s Assistant Superintendent of Administration Jonathan O’Neil said, adding however that they didn’t support the original bill.

ABSENTEE BALLOT WEAKNESSES: Cybersecurity experts are warning that Maryland’s online absentee-ballot system is dangerously vulnerable to tampering and privacy invasions, both growing concerns in a year when hackers have breached the Democratic National Committee and attempted to access boards of elections in at least two states, Josh Hicks of the Post reports.

OBSTACLES TO AID WRONGLY CONVICTED: Institutional obstacles in the Maryland General Assembly impede legislative efforts to enable the wrongly convicted to prove their innocence and, once exonerated, to be appropriately compensated for the years they lost, state legislators said Thursday. Steve Lash of the Daily Record reports that these hurdles include the need for legislators to compromise to get bills passed; a part-time legislature made up of people whose full-time jobs are tied to the status quo; and the General Assembly’s practice of enacting laws without much debate, the lawmakers said at a Baltimore conference on wrongful convictions.

LINING UP FOR BA CO EXEC RUN: It may seem early, but WYPR-FM’s Fraser Smith and John Lee assess the potential candidates in the 2018 Baltimore County Executive race, which includes the possibility of a number of Republican hopefuls as well as Democrats.

ANNE ARUNDEL ON SCHOOL FLU VACINE: The Anne Arundel County HealthDepartment is recommending parents take their children to walk-in flu clinics this fall, because the school system will not offer nasal spray flu vaccines in schools this year, Meredith Newman reports in the Annapolis Capital. In June, a task force for the U.S. Centers for Disease Control and Prevention recommended that people not use the FluMist nasal spray because studies found it was ineffective. The nasal spray was used in the school system’s clinics.

FICKER THE GADFLY: Josh Kurtz of Center Maryland asks: Whatever happened to the Good Old Days in Montgomery County, when Robin Ficker, consistently, was Public Enemy No. 1? Year after year, Ficker, the gadfly extraordinaire, the chronic candidate who lucked into a seat in the House of Delegates from 1979 to 1982 and has been trying to claw his way back to respectability ever since, has won the enmity of the Montgomery County political establishment by doing the things that gadflies do.

BENTLEY AS TIFFANY COLLECTOR: Probably one of the more interesting remembrances of the late Helen Delich Bentley is that the crusty congresswoman had a soft spot, it turns out, for antique glassware and porcelain. Delicate flower-inspired Art Nouveau-style vases and other masterworks by Tiffany are the centerpieces of a group of items being auctioned off this fall in Dallas by Heritage Auctions, which is handling the private collection she accumulated, reports Fern Shen for Baltimore Brew.

ENDANGERED SPECIES: A rare shrimp-like creature believed to exist in spring water in Rock Creek Park that has been a candidate for federal protection since 2010 is moving a step closer to being listed as an endangered species, Andrew Metcalf reports for Bethesda Beat. The amphipod is one of two species that were featured as part of an original version of an ongoing Purple Line lawsuit that claimed building the 16.2-mile light-rail line through Rock Creek Park would harm their habitats.