HOGAN, MILLER WRESTLE OVER ATTACKS: Senate President Mike Miller called out Gov. Larry Hogan Friday over a social media post that criticized the senators who overrode one of his vetoes and urged citizens to contact them after the vote was already taken. Miller said the post helped generate abusive calls and emails to lawmakers, and could damage the Republican governor’s relationship with the Democratic Senate majority, Michael Dresser and Erin Cox report in the Sun.

THE WEEK AHEAD: In a wrapup of items for the week ahead, Pamela Wood of the Sun writes that, as of Friday morning, senators had submitted 1,004 bills, while delegates had introduced 1,504 bills. This week, lawmakers will hold committee hearings on scores of bills, including ones that would expand the earned income tax credit, restrict the use of pesticides that harm bees and increase the pay for jurors.

DRONE DETECTION TECHNOLOGY: Gov. Larry Hogan wants to spend $1 million to install drone detection technology over two high-security Maryland prisons, reports Erin Cox in the Sun. Hogan’s budget proposes installing the technology at prison complexes in Jessup and Cumberland. It comes after an August incident in which authorities caught two men parked outside the Western Maryland prison with a drone and a car full of drugs, pornography, tobacco and a cellphone.

GUNS AND DOMESTIC ABUSERS: Lawmakers are taking aim at an oversight in state law that advocates for domestic violence victims say may be enabling convicted abusers to keep their guns, Andrew Metcalf of Bethesda Beat reports. State Sen. Jamie Raskin and Del. Will Smith  introduced legislation in the General Assembly that would force judges to inform offenders at the time of conviction about the existing state law that forbids them from owning firearms if convicted of a felony or certain domestic violence crimes.

BIRTH INJURY FUND: The battle over whether Maryland should create a special fund to compensate the families of babies injured during birth heated up again during a legislative hearing Friday, as supporters urged lawmakers to look across the Potomac River for guidance, reports Daniel Leaderman for the Daily Record.

DRUNK DRIVING LAWS: The father of a Montgomery police officer killed by a drunken driver has called out Del. Joseph Vallario, the chairman of the Judiciary Committee, saying Vallario has blocked “common sense legislation” to toughen drunken driving laws, Andrew Metcalf of Bethesda Beat reports. He also said that Vallario’s occupation as a defense attorney, in which he defends individuals charged with drunken driving offenses, is a conflict of interest. The father and local state legislators are pursuing a law to require repeat offenders to have an ignition interlock system in their vehicles. The system would require drivers to blow into a breathalyzer to start their vehicles.

NO CAMERAS DURING SENTENCING: A bill to allow the media to film and broadcast criminal sentencing proceedings, which was criticized by judges, attorneys and victims’ rights advocates, received an unfavorable committee report Thursday. House Bill 81 would have permitted media outlets to file a written request at least 24 hours prior to a hearing to request to film it. Opponents said that did not permit prosecutors and defense attorneys time to inform witnesses and file objections to the presence of a camera, reports Heather Cobun for the Daily Record.

PUBLIC MEETING NOTICES: A Carroll County state senator has submitted legislation in the General Assembly that would elaborate on the state’s open meetings law. Senate Bill 529, one of two bills filed by Sen. Gail Bates, calls for public bodies required to hold open meetings to submit an agenda for their meetings at least 24 hours before the start of that meeting, reports Heather Norris in the Carroll County Times.

REFORMING POLICE SEIZURES: A proposal to reform the process by which police seize property like cash and cars from suspected criminals in drug cases is pitting law enforcement against civil liberties groups. Sen. Michael Hough, a Frederick Republican, told the Senate Judicial Proceedings Committee during a hearing Thursday that current procedures contradict constitutional protections such as due process, Bryan Renbaum reports for MarylandReporter.com.

LIFETIME BAN ON PERJURERS: The Maryland Senate voted Friday to repeal the state’s lifetime ban on convicted perjurers from testifying in court, Steve Lash of the Daily Record writes.

RESTRICTING ABORTION WINDOW: A group of Carroll County legislators is pushing for legislation in Annapolis that would restrict the time period during which a woman could obtain an abortion in the state. House Bill 603 and Senate Bill 749, named the “Pain-Capable Unborn Child Protection Act,” call for a ban on abortions conducted beyond 20 weeks of pregnancy. Heather Norris reports in the Carroll County Times that its primary sponsors are Del. Kathy Afzali, R-District 4, in the House, and Sen. Justin Ready, R-District 5, in the Senate.

CHANGES TO STATE SONG: Tamela Baker of the Hagerstown Herald Mail reports on the continuing efforts in Annapolis to change the pro-Confederacy words of the state song or scrap the whole thing and start over.

COMMON SENSE TWEAKS: The editorial board of the Frederick News Post writes that guns should have no place on college campuses, except in the holsters of highly trained law enforcement agents. Similarly, it is simply common sense that those who have committed domestic abuse or a felony have no access to such weaponry. Finally, it’s a no-brainer that firearms should be kept away from terrorists. All three ideas are contained in pieces of legislation being readied by Democrats for introduction into the General Assembly.  These seem like minor tweaks not deserving of the fanfare with which they were announced.

FIXING PROCUREMENT: Gov. Larry Hogan last week created a 19-member commission to come up with ways to fix Maryland’s maddeningly inefficient system for purchasing $7 billion worth of goods and services each year. But, writes opinionator Barry Rascovar, this group may wind up trying to re-invent the wheel because state legislators appear ready to pass legislation, based on three years of study, that could dramatically change state purchasing practices. There’s no doubt Maryland’s now-antiquated and creaky procurement system needs an overhaul.

COMPLAINTS AGAINST LIQUOR BOARDS: Frustrated by actions they say ignore communities’ concerns and are biased toward liquor interests, critics of the Baltimore City Liquor Board have been taking their cause to Annapolis, where the three commissioners appointed by Gov. Larry Hogan last July are up for confirmation. These “recess appointments” by the Republican governor will expire by the end of the legislative session on April 11 unless the Senate Executive Nominations Committee votes to confirm them, reports Fern Shen in Baltimore Brew. 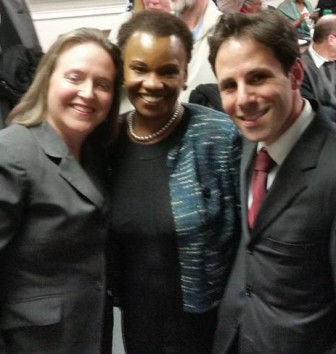 BLACK CAUCUS PAC WON’T ENDORSE EDWARDS: The political arm of the Congressional Black Caucus has decided not to endorse Rep. Donna Edwards for Senate — despite the fact that the Prince George’s County Democrat would be the first African-American elected to the chamber from Maryland, John Fritze reports for the Sun.

BROWN CAMP DID NOT GET NAACP OK: Former  Lt. Gov. Anthony Brown clarified Sunday that his congressional campaign was not authorized to use the NAACP logo and name in a message that staff members sent last week invoking the national civil rights organization, reports Arelis Hernandez in the Post.

CROWDED 8TH DISTRICT RACE: In the crowded race for the 8th Congressional District — one that now has three front-runners — the candidates try to distinguish themselves in any way they can, writes Bill Turque for the Post. And it’s not always easy to gain the traction needed for the rest of those in the pack.

PROFILE OF ARIS ALLEN: With no African Americans on the Arundel County School Board for the first time in about 42 years, Cindy Huang of the Annapolis Capital profiles Aris Allen, the first African American to serve on the board and a long-time and historic civil rights activist. 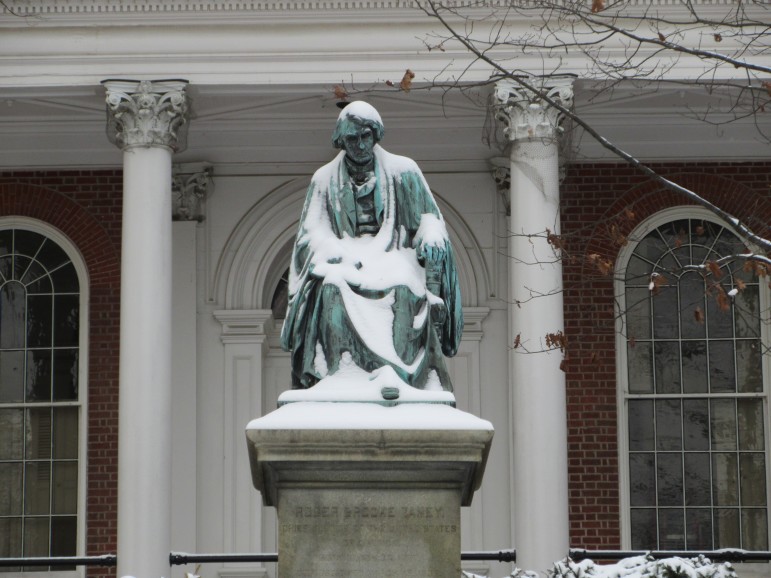 TANEY HISTORY, STATUES IN FLUX: A year ago, the name Roger Brooke Taney may not have conjured up much more than vague memories from high school history class. But, writes Nancy Lavin in the Frederick News Post,  familiarity with the Taney name and legacy has grown, sparked by recent debates in three Maryland  cities considering proposals to remove Taney memorials from public property. The fifth chief justice of the United States is best known for writing the court’s opinion in the landmark 1857 Dred Scott decision, which prevented African-Americans from suing federal court on the grounds that they had no rights as American citizens.