Stunned as we all should be by the death of one of the great and most brilliant Supreme Court Justices, Antonin Scalia, it is odd to be watching and evaluating a prosaic event like a presidential debate hours later.

The debate was preceded by a perfectly appropriate statement by President Obama which focused on eulogizing Justice Scalia.  The reactions were all appropriately respectful, with Rubio’s being the most comprehensive.

Per the presidential debate, here goes…

As the Republican South Carolinian debate approached, fractiousness was the word of the day. To paraphrase former political satirist Tom Lehrer:  Bush hates Rubio; Trump hates Bush and Cruz; and everybody hates Trump.

Republicans claim to hate identity politics, but reports are that all candidates are pandering to the religious right in South Carolina.  Someone should resurrect Paul Tsongas’ great metaphor for describing such candidates: Pander Bears.

Reversing Reagan on speaking ill of other Republicans

Let’s look at Saturday night’s debate and how the principals did:

After a respectful opening, the Reagan 11th Amendment was changed by some candidates to “Thou must speak ill of Republican opponents.”

Sen. Marco Rubio seemed a changed man from the oddly repetitive and unresponsive candidate of a week ago.  He was clear and often eloquent in his sophistication on geopolitics, the history of the past 40 years of the Republican Party, taxes and even immigration, relative to his opponents at least.  It was impossible to declare a winner on his clash with Cruz on immigration.

Former Gov. Jeb Bush was more articulate and wise, but his consistent effort to overcompensate for his lack of confronting Trump in the past was at times embarrassing.

Sen. Ted Cruz was another candidate undone by Trump-initiated personal attacks.  His inconsistencies on what his disposition is and was regarding enemies such as ISIS and Syria and Iran are simply irreconcilable.

Gov. John Kasich of Ohio shone in his aggressive moderation.  He warned about irresponsible personal attacks leading to a Hillary Clinton presidency.  He called the Republican infighting crazy and antithetical to Republican interests in general.  He was the articulate Reasonable Man throughout.

Once again, the audience interrupted the flow of conversation with their cheers and boos.  Why any serious network believes they contribute to a political debate — why mob rule in adjudicating disputes — or constitute a good idea for assessing democratic disagreements is impossible to understand.

It is hard to say how the South Carolina or national electorate will react, but they should be stronger for Marco Rubio, John Kasich and Jeb Bush, in that order.

Last Sunday, I said I was thinking of giving up these debates for Lent, but I’ve never been very good at fasting.

These events are not really debates to begin with, though they are what we’ve come to accept for debates — candidate forums, joint appearances or whatever in the TV age. What kind of “debate” do you have when candidates have one minute to respond to a question (100-150 words), and then half as long to respond to the response?

A real debate would be much more boring — three, four or five minutes on one side of an issue, and then a response of similar length by the other side. All candidates would get to respond to the same question, but that’s gets awfully boring too. That’s the kind of debate MarylandReporter.com and AARP sponsored in the 6th Congressional District in 2012.  I found it boring, and I was the moderator.

My fellow commentator Rick Vatz above complains of the cheers and boos of the audience in the auditorium, but this is really theater or even a wrestling match — let’s you and him fight; sock ‘im one; oh, that was a low blow.

Trump and Sanders same on Iraq 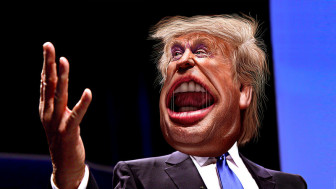 On Saturday’s performance, what is the difference between Donald Trump and Bernie Sanders on the Iraq war? They both opposed it initially, and it wound up being the disaster they expected. With the split screen, Jeb Bush tried to find the appropriate expression to react to the charge that his older brother the president lied about the Iraq war and was to blame for the current mess in the Middle East. Then the Trumpster went further, implying “W” did not keep us safe based on the 9/11 attacks.

Trump told John on Face the Nation Sunday that he wasn’t blaming anyone for 9/11. This is typical of a bully. Caught smacking someone in the back of the head, they claim they didn’t do it. Next thing you know he’ll be complaining the George H.W. Bush didn’t remove Saddam Hussein in the first Gulf War in 1990. Maybe he already has.

This back and forth with Jeb, shouting over him at some points, was just the right level of rudeness to cap off his complete lack of specifics on anything. “Trust me, I can make American great again. How? I can bully China, I can cajole Mexico, I can obliterate ISIS. How? Trust me.”

In God we trust, all others pay cash. Donald should show us the money, not just tell us about all the money he has.

And poor Ben Carson, was this his last debate? Here’s his first question, about replacing Antonin Scalia on the Supreme Court.

Carson: “Well, the current Constitution actually doesn’t address that particular situation, but the fact of the matter is the Supreme Court, obviously, is a very important part of our governmental system.”

Later on, realizing he had really bobbled a softball question, he goes back, erases his blue book, and says: “First of all, let me go back to your first question for me. It wasn’t phrased as who gets to nominate Supreme Court appointees. Of course that’s the president. So I know that there are some left-wing media who would try to make hay on that.”

When you give a bobble-headed response, take no responsibility and then blame the “left-wing media” for pointing it out, and hope that all is forgiven among the folk who hate the media even more than they do Obama.

I agree with Vatz on Jeb, Ted Cruz and Marco Rubio, but confess a strong bias for those who have actually governed (governors) and not just talked about governing (senators), for the reasons the recently departed candidates Chris Christie and Martin O’Malley constantly pointed out.

According to a Federal News Service transcript of the whole debate, following the Trump-Bush dust-up, Kasich says:

“I’ve got to tell you, this is just crazy, huh?” (Audience laughs)

Asked to explain, he then gives one of his typical, reasonable, not very exciting answers about the Iraq War.

Yet “crazy” and “nuts” might be applied to much of these so-called debates.

Off to the Races: Stewart in, Hyatt out in District 12; geezer ceiling at State House; Cohen vs. Pantelides in Naptown; vying for teacher support; and Kittleman of Columbia