From the cover of the preliminary report.

The  education commission that met in relative obscurity for 16 months now faces the challenge of deciding what it will take and how much it will cost to implement its lofty goals of change and improvement for Maryland public schools.

The Kirwan Commission on Innovation and Excellence in Education has become a key talking point in the 2018 election campaign, and on Thursday it picks up its work where it left off in January for the legislative session.The commission will split into five work groups to tackle the five main policy recommendations of its preliminary report in January. 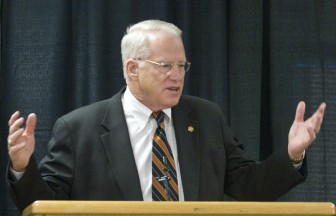 In an interview, William “Brit” Kirwan, the former university system chancellor who chairs the commission, said the commission will likely finish most of its work “sometime this summer.” But also “we have to modify the current funding formulas,” and that won’t happen till “early or mid-fall.”

Kirwan laughed when asked how much the proposals will cost, saying he is often asked that, but “it would be almost irresponsible to put a number out there” before the commission’s work is done.

“We really do need to drill down” into how the recommendations will be implemented, he said.

“I was very pleased by how that preliminary report was received by the General Assembly,” Kirwan said. He is “not really surprised” that it’s become a topic for candidates on the campaign trail.

“Everybody is invested in and interested in education. It touches everybody’s life in some way,” he said. “It’s both a state issue but is also an important local issue.”

“Without exception, people resonate with the five major policy recommendations,” he said. “People think it makes sense but does it make enough sense to fund the recommendations?”

But Kirwan emphasized that “it’s not just about new money.”

“There will be some things we are no longer doing,” and part of the task of the work groups will “identifying areas where we can shift resources.”

Here is a draft outline of five major policy recommendations the work groups will be tackling.

Work group 1: Early Childhood Education and Care: High quality pre-K will be expanded to all four-year-olds and all low-income three-year olds. All children will be assessed before they come to kindergarten to identify those who need supports to be ready to learn.

Work Group 2: Recruiting, Training, and Retaining High Quality and Diverse Educators and Leaders: Higher paid, better educated, more rigorously trained teachers will work as professionals in schools that offer real careers in teaching and are organized to ensure that teachers have the time they need to work together in teams to continuously improve their practice and improve the performance of students. All schools will have highly trained principals who are prepared to create fully professional work environments for teachers.

Kirwan said, “The redesign of teacher preparation is probably the most difficult issue to tap down.”

Work Group 3: World Class Instructional System: The new system will include fully aligned curriculum frameworks, course syllabi and assessments designed to prepare students to reach a career and college ready standard set to global standards. Most students will be expected to meet the standard by the end of grade 10 and all students are expected to meet it by the end of high school. Once that standard is met, students can choose one of several programs to prepare for postsecondary education and/or industry credential.

Work Group 4: System that Ensures At-Risk Students are Successful: This system will provide at-risk students ongoing academic supports and enrichment as well as extensive case management to address social, physical, mental and family needs that will enable success at school.

Work Group 5 (The entire 24-member commission): Governance and Accountability: A system will be put in place to oversee this new system, monitor its implementation and hold government agencies at all levels accountable for implementation of the commission’s recommendations.

Kirwan has emphasized that accountability standards are essential to gain public acceptance of the recommendations and increased funding to achieve them.

These include an independent oversight body to oversee and coordinate implementation of the plan.

The goal of this work group includes a requirement that school districts submit plans that are consistent with the intentions of the commission, or they won’t get a portion of the formula funds. Further funding would be dependent on approved plans being implemented, and an independent oversight body would make those determinations.

The recommendation also includes creation of “inspection teams to visit struggling schools and pair high performing school leaders with struggling ones to provide support and mentorship, and a complementary system designed to provide the state with a profile for every school, and trigger visits from the inspection team.”