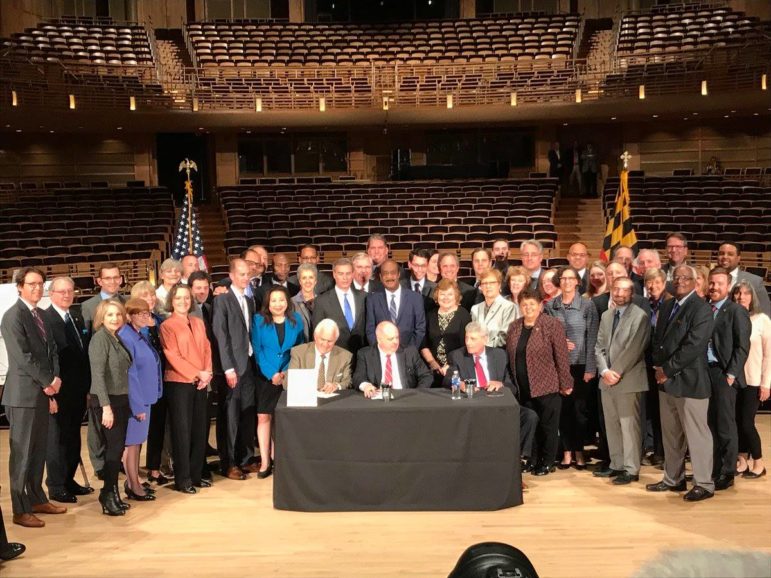 Strathmore Hall was an unusual venue for a bill signing. Facebook photo

AMAZON-METRO BILLS SIGNED: If there was any lingering, smidgen of doubt about the role the nationwide Amazon headquarters competition played in convincing Washington, D.C.’s regional leaders to fully fund Metro for the first time, those doubts were erased on Wednesday, when Gov. Larry Hogan (R) signed WMATA funding legislation into law at Strathmore Hall in North Bethesda, writes Bruce DePuyt for Maryland Matters.

FUNDING ON KIRWAN PANEL AGENDA: The education commission that met in relative obscurity for 16 months now faces the challenge of deciding what it will take and how much it will cost to implement its lofty goals of change and improvement for Maryland public schools, Len Lazarick writes in MarylandReporter The Kirwan Commission on Innovation and Excellence in Education has become a key talking point in the 2018 election campaign, and today it picks up its work where it left off in January for the legislative session.The commission will split into five work groups to tackle the five main policy recommendations of its preliminary report in January.

VOLKSWAGEN DEAL: The state of Maryland’s $33.5 million deal with Volkswagen to settle claims that the German automaker polluted the air by bypassing emissions controls in its diesel cars also could bring its vehicles back to the Port of Baltimore, reports Meredith Cohn for the Sun.

DEAD ZONE EXPERIMENT: The Chesapeake Bay Foundation scientists put reef balls laden with oyster spat into the Severn River on Wednesday — not to grow oysters, but to see if they might break up dead zones of low oxygen. It’s an experiment, Pat Furgurson of the Annapolis Capital reports. Can man made oyster reefs create enough turbulence in the water to improve oxygen levels in the water column?

VIOLENCE IN BALTIMORE: In an op-ed for the Sun, state Sen. Bobby Zirkin opines that Baltimore is the most violent city in the entire nation. This is an emergency of epic proportions. Members of the General Assembly from both political parties, the governor’s office, the mayor’s office, police and state’s attorneys, business leaders and citizens simply tired of the violent crime came together during this year’s legislative session to create a real package of legislation to address the crisis.

FRANCHOT POLLS EVEN BETWEEN PARTIES: One of the most interesting and overlooked nuggets in the latest Goucher Poll, which was released earlier this week, was the approval/disapproval rating for state Comptroller Peter Franchot (D). It was completely identical for Democrats and Republicans. 42% of Democrats approved of the job Franchot is doing; 42% of Republicans also approved. 14% of Democrats disapproved of Franchot’s job performance; ditto for Republicans, writes Josh Kurtz of Maryland Matters among other items in a political notebook column.

GOV HOPEFULS ON AMAZON, POT: The seven Democratic candidates for governor varied in their responses when asked whether they support the tax incentive package the state has offered Amazon to locate its second headquarters in Montgomery County, with some saying Gov. Larry Hogan created a bad offer on behalf of the state, Andrew Metcalf reports for Bethesda Beat. The candidates also discussed whether they’d support legalizing recreational marijuana use at a forum Tuesday night at the Silver Spring Civic Center.

BAKER SPLITS ON LEGAL POT: Maryland gubernatorial hopeful Rushern Baker says he doesn’t support legalizing marijuana, a rare difference between him and his rivals in the crowded Democratic primary, writes Steve Thompson for the Post. “I don’t at this time,” Baker, the Prince George’s County executive, said Tuesday night at a candidate forum sponsored by the Woman’s Democratic Club of Montgomery County. “I know that it’s a trend moving across the country.”

BAKER: HANDLING OF SCANDALS SUPPORTS RUN: Over the last year or so, the Prince George’s County school system has been tarred by one scandal after another: grade-fixing to boost graduation rates, secret raises for administrative personnel, alleged abuses in the Head Start program. County Executive Rushern Baker, running for governor in a crowded Democratic primary field, argued during an interview that his travails with the county school system help make the case for his gubernatorial bid, Karen Hosler of WYPR-FM reports.

MADALENO COMMERCIAL: Maryland state Sen. Richard S. Madaleno Jr., D-Montgomery, today will debut the first television advertisement of the crowded Democratic gubernatorial primary race — a move designed to shore up his base in his home district, writes Rachel Chason for the Post.

PATHS TO VICTORY: The editorial board of the Sun opines that Gov. Larry Hogan can’t just coast to re-election victory. In the latest Goucher Poll, no matter how popular he is, he isn’t cracking 50%. He needs to do something more. Nor can the Democrats assume that a big wave of anti-Trump voters will get the job done.

SAM BOGLEY’s OBSCURE RETURN: Meghan Thompson of Maryland Matters writes about Sam Bogley’s obscure return to the political arena as a candidate for Prince George’s County executive. Bogley had served as Harry Hughes’s lieutenant governor in Hughes’s first time but was dumped over their split on abortion rights. He hasn’t given an interview since, has no campaign website, and filed an affidavit with the Maryland State Board of Elections earlier this month pledging not to raise or spend more than $1,000 on his campaign.

CORRECTION: Independent U.S. Senate candidate Neal Simon did not raise significantly more money than incumbent Sen. Ben Cardin in the first quarter of 2018, as inaccurately reported by MarylandReporter.com on Tuesday. That story was based on a press release from the Simon campaign titled, “U.S. Senate Candidate Neal Simon Announces 2018 Q1 Fundraising Total,” but the candidate’s filing with the Federal Election Commission actually included all funds raised since Nov. 1, 2017, not just the first three months of 2018.

SESSIONS TO RECONSIDER CRIME FUNDING: Sen. Chris Van Hollen secured a promise from Attorney General Jeff Sessions on Wednesday to reconsider why Baltimore was excluded from a multimillion-dollar federal grant program aimed at cities struggling with violent crime, reports Jeff Barker in the Sun. Sessions made the concession while testifying on the Justice Department budget at a hearing of a Senate Appropriations subcommittee. Van Hollen, a Maryland Democrat, is a member of the subcommittee.