The Chesapeake’s underwater grasses — critical havens for everything from blue crabs to waterfowl — surged to a new record high last year, surpassing 100,000 acres for the first time in recent history.

“I never thought we would ever see that,” said Bob Orth, a researcher with the Virginia Institute of Marine Science who has overseen the annual Baywide underwater grass survey since it began in 1984. “But things are changing.”

It was the third straight year that acreage of these underwater meadows has set a new Baywide record.

The 2017 survey results, released in late April, came on the heels of a scientific study published in March that credited nutrient reductions in the Bay for a sustained long-term comeback of the grasses over the last three decades — even as those habitats are in decline globally.

“Seeing record growth in underwater grasses for the past three years just reinforces that our efforts to restore the Chesapeake Bay and its local tributaries is working,” said Jim Edward, acting director of the state-federal Bay Program partnership.

The need to restore underwater grasses is one reason that the Bay cleanup effort aims to reduce nutrient and sediment pollution, as water clouded by sediment or nutrient-fueled algae blooms can be lethal to the nearly two dozen species of underwater grasses found in the Bay.

Like all green plants, submerged grasses need sunlight to survive, and they receive more sunlight through clear water. Because of the link to water clarity, the status of submerged aquatic vegetation — or SAV — is considered a key indicator of the Bay’s health.

Grass beds are also a critical component of the Bay ecosystem in their own right. In addition to providing food for waterfowl and shelter for fish and crabs, they also pump oxygen into the water, trap sediment and buffer shorelines from the erosive impact of waves.

When the survey began in 1984, fewer than 40,000 acres of SAV were observed in the Bay. Since then, the total amount has generally increased, though the amount in a given year may fluctuate widely depending on the weather: Big storms drive huge amounts of nutrients and sediment into the Bay that tend to cause significant losses, while very hot summers cause die-offs of eelgrass, a dominant species in high-salinity areas of the Lower Bay.

Most recently, Hurricane Irene and Tropical Storm Lee in late summer 2011 knocked grasses back to 48,195 acres in the 2012 survey, a recent low.

But after that, the beds continued their long-term recovery, with Baywide coverage increasing for five consecutive years — the longest period of uninterrupted expansion in the history of the survey — and setting records in the last three.

The recent paper published in the Proceedings of the National Academy of Sciences, written by a team of 14 scientists, credited the overall recovery to improved water quality stemming from a 23% decline in nitrogen concentrations in the Bay and an 8% decline in phosphorus since the mid-1980s.

“We don’t need miracles,” said Brooke Landry, a biologist with the Maryland Department of Natural Resources and chair of the Bay Program SAV Workgroup and, along with Orth, one of the co-authors of the paper. “We just need a sustained effort.”

Environmental advocates said the underwater grass record was evidence that cleanup efforts are working — and need to be maintained.

“Pollution is going down, the dead zone is getting smaller, and oysters are making a recovery. This progress is extraordinary,” said Beth McGee, a scientist with the Chesapeake Bay Foundation. “But the recovery is fragile and proposed rollbacks to federal environmental protection regulations threaten future progress.” 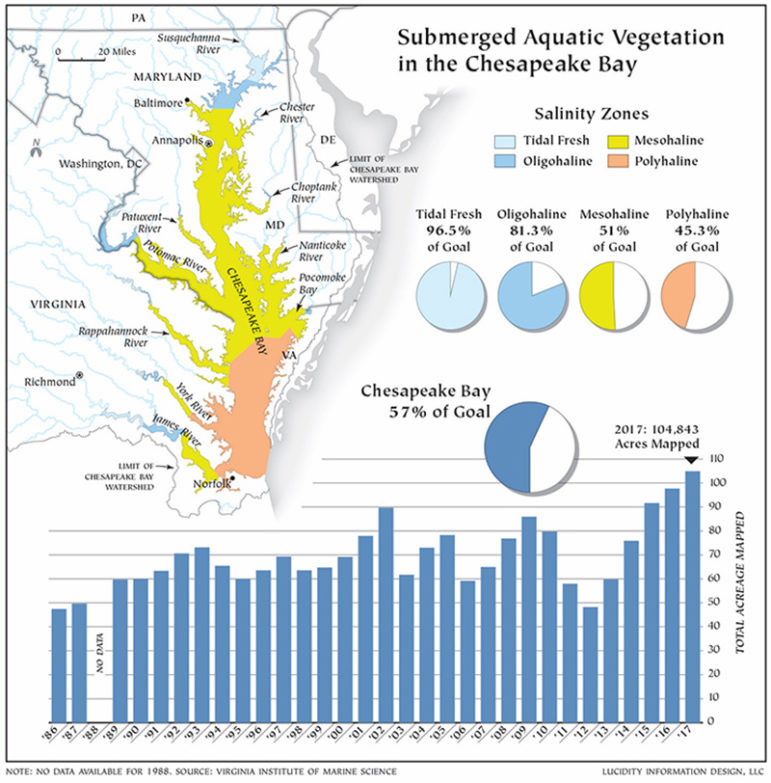