Is Maryland building ‘Cadillacs or Buicks’ for its new public schools?

When it comes to new public schools, “are we building Cadillacs or are we building Buicks?” was the question David Lever tried to answer at a conference put on last Thursday by the Maryland Association of Counties. 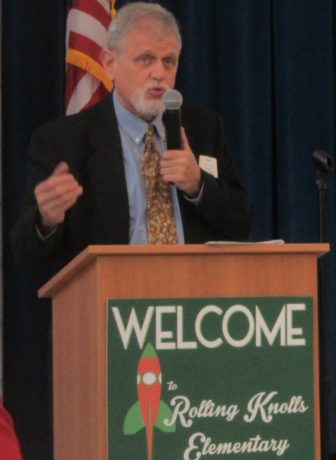 Lever is the departing executive director of the Interagency Committee on School Construction who has resigned in protest of actions by Gov. Larry Hogan and Comptroller Peter Franchot. Both men have been pushing for building more schools for less money, as well as better maintenance and air conditioning.

“I can say without a doubt that we are building Buicks,” Lever told the county officials and school board members meeting at the new Rolling Knolls Elementary School in Annapolis. But “it is not your dad’s Buick,” Lever said, comparing a 1962 Buick with a 2016 Buick, with all the bells, whistles, electronics and technology upgrades not found 50 years ago.

The same is true of schools, where the square footage per student had increased dramatically. That’s because more is being asked of a modern school building, he said.

Similar trends are increasing the size of schools and construction cost around the country, said Mary Filardo, executive director of the 21st Century School Fund in Washington. She said there were also new health and safety standards, smaller class sizes requiring more rooms, and increased security.

Maryland in the past has been cited as one of the few states providing state aid for local school construction, as House Speaker Michael Busch tried to assert in opening remarks at the conference. But Filardo contradicted him, saying actually “Maryland is pretty average” when it comes to state support.

According to the national study “The State of Our Schools” by the 21st Century School Fund, the state of Maryland contributes about 26% on average to local public school construction; the national average is 18%. Twelve states contribute nothing for school buildings.

Maryland spends a higher percentage on maintenance and operating costs.

The fund estimates that increasing enrollment in Maryland and other states will require even greater investment, over $4 billion for Maryland by 2014.

House Speaker Busch and Senate President Mike Miller have set up their own commission to study public school construction and report back to the legislature in December.

Speaking as a history teacher at Brunswick High School, Gary Brennan said, “How we teach and how kids learn has changed more in 10 years than in the previous 30.” Brennan recently returned to the classroom after 10 years as president of the Frederick County Teachers Association. He serves on the board of the Maryland State Education Association.

Costs likely to go up

Other panels at the all-day session said that construction costs are likely to continue rising due to the coming worker shortage in the building trades and fluctuating material prices based on worldwide demand.

One way of reducing some costs is by using repeat designs for similar kinds of schools, a practice widespread in Anne Arundel County. The repetition saves some money on design and some on construction costs as contractors become familiar with the design. But not all designs work on all school sites.

Lever raised some broader questions about the schools Maryland is building.

Maryland schools not #1 in two other recent rankings