Jerusalem looking over the Old City with the Dome of the Rock in the right foreground. Photo by gnuckx with Flickr Creative Commons License.

By Saqib Ali and Sammy Al-Qassem 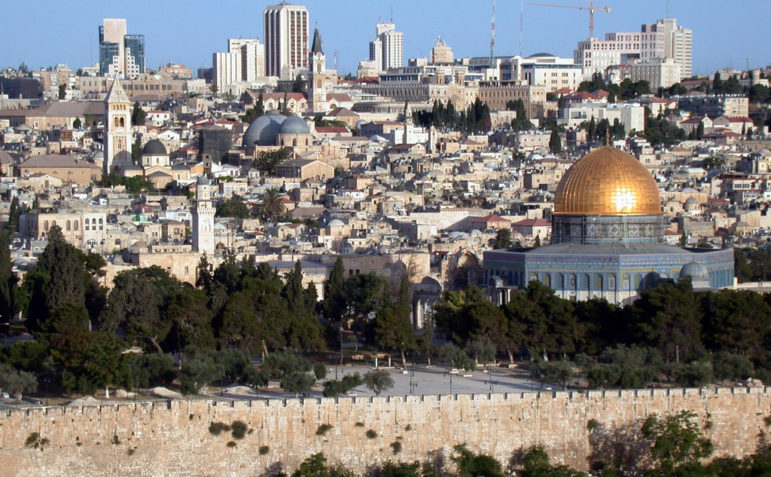 Jerusalem looking over the Old City with the Dome of the Rock in the right foreground. Photo by gnuckx with Flickr Creative Commons License.

One of the more contentious issues debated at the Democratic Party Platform committee was the party’s position on the Israeli/Palestinian conflict.

For too long, the Democratic Party Platform has been silent — or worse, hypocritical — on the human rights of Palestinians. It’s time to end this hypocrisy.

In 2012, the party’s platform contained a statement proclaiming Jerusalem as Israel’s “undivided capital” — even though President Obama’s own State Department (headed by then-Secretary Clinton) didn’t recognize Jerusalem as Israel’s capital and insisted the city must be divided between Israel and Palestine.

Dr. James Zogby, a Bernie Sanders surrogate on the platform committee, proposed an amendment specifically calling for the end of the Israeli occupation of Palestinian territories and condemning the illegal Israeli settlements. The amendment also removed derogatory references to the Boycott, Divestment and Sanctions movement which were in the draft. This amendment was rebuffed on an 8-5 vote with only the Sanders appointees voting for it

The draft platform will now head to Orlando for another markup session and then to the floor of the Democratic Presidential Convention in Philadelphia at the end of July where more Democrats may get to weigh in on Palestinian human rights.

Such duplicity at the expense of Palestinian rights is no longer acceptable to many Democrats.

Surveys show that self-described American liberals now sympathize with Palestinians more than they do with Israelis. Black Lives Matter activists routinely draw a parallel between their struggle and the fight for Palestinian freedom. Undoubtedly this is due to the decades of occupation and apartheid-like conditions that the Israeli government has imposed on the Palestinian people.

During the presidential debates, Sen. Sanders received widespread praise when he criticized Israel’s “disproportionate” use of force during the 2014 war with Gaza. The non-violent movement to Boycott, Divest and Sanction Israel is gaining steam because people rightfully see it as an analog to the movement that helped end apartheid in South Africa.

Congressman Cummings likely already knows about the dehumanization that the occupation inflicts on Palestinians. They live as non-citizens in their own land. In East Jerusalem their homes are subject to demolition because as non-Jews they cannot get construction permits.

In the West Bank. they can’t dig wells to irrigate their crops and feed their livestock. In Gaza, they aren’t permitted to travel outside the tiny enclave — even to visit family in Europe or America. Palestinians in the diaspora are not allowed to resettle in the Palestinian territories.

Meanwhile Jewish people from all over the world are encouraged to emigrate, instantly get Israeli citizenship and take up residence in illegal Israeli settlements built on West Bank land illegally taken from Palestinians.

Knowing all this, it is disappointing that Congressman Cummings didn’t vote for Zogby’s amendment. He missed an opportunity to change the course of the Democratic Party which for too long has favored the occupier instead of the occupied.

If language from Zogby’s amendment isn’t inserted into the platform, Mr. Cummings might find himself on the floor of the Democratic Convention faced with a revolt from assembled delegates. Memorably, Los Angeles Mayor Antonio Villaraigosa found himself in this position in 2012 when he gaveled through the united-Jerusalem amendment on a voice-vote over the overwhelming boos of the rank-and-file.

Congressman Cummings is uniquely positioned to advocate for Palestinians long suffering under military occupation. Will he take this opportunity to make a bold statement for justice? Or will he toe the line on stale party orthodoxy?

Saqib Ali is chairman of Marylanders For BDS and a former member of the House of Delegates. Sammy Al-Qassem is a founding member of Baltimore Palestine Solidarity