LEVER PERSONA NON GRATA: Gov. Larry Hogan extended his feud with David Lever, refusing to act Wednesday on the Interagency Committee on School Construction recommendations while blocking the longtime official from addressing the Board of Public Works. Michael Dresser reports in the Sun, that Hogan, joined by Comptroller Peter Franchot, expressed lack of faith in Lever’s management abilities. The two officials restated their opposition to significantly reducing the number of school maintenance inspections scheduled for the coming year, charging that Lever’s plan to do so compromises children’s safety and health.

LEVER ON SCHOOL CONSTRUCTION: When it comes to new public schools, “are we building Cadillacs or are we building Buicks?” was the question David Lever tried to answer at a conference put on last Thursday by the Maryland Association of Counties. Lever, is the departing executive director of the Interagency Committee on School Construction who resigned in protest of actions by Gov. Larry Hogan and Comptroller Peter Franchot, said, “I can say without a doubt that we are building Buicks.” But it’s not an old, basic Buick model, he added. Len Lazarick writes the story for MarylandReporter.com.

MTA OFFERS BALTIMORE BUS PLAN: The Maryland Transit Administration released significant revisions Tuesday to its draft plan for a new system of Baltimore bus routes, with 86% of the initially proposed routes revised based on more than 1,280 suggestions, reports Colin Campbell for the Sun.

GILL ‘BULLISH’ ON WASHINGTON CO: During Maryland Commerce Secretary Michael Gill’s visit to Washington County on Wednesday, he heard a lot about plans, assets and obstacles for local business and development. But at the end of it all, “I’m bullish on Washington County,” he said. Gill spent most of the day meeting with local officials and business leaders, writes Tamela Baker in the Hagerstown Herald Mail.

KAGAN ASKS STATE TO PAY FOR SHUTTLE: Andrew Metcalf of Bethesda Beat writes that Montgomery County state Sen. Cheryl Kagan  is making the case that the county shouldn’t have to pay for providing free shuttle bus service during Metro’s SafeTrack repair surges on the Red Line later this year.

SAVING BAY’S COWNOSE RAYS: Animal rights advocates continue their call to stop the killing of cownose rays in the Chesapeake Bay a year after they revealed graphic video of bow fishing contests where rays were shot with arrows, hit with bats, weighed and dumped back into the water, Chase Cook reports for the Annapolis Capital.  That video helped spark discussion about the rays and their role in the Chesapeake Bay, to which they migrate each year.

HIGHWAY HONORS SHERIFF’S DEPUTIES: Gov. Larry Hogan on Wednesday dedicated a portion of a highway in Harford County to two sheriff’s deputies who were killed in February after an encounter with a gunman at a Panera restaurant, reports Ovetta Wiggins in the Post. Hogan was joined by state and local officials, members of the Harford County Sheriff’s Office and the families of Senior Deputy Patrick B. Dailey and Deputy First Class Mark F. Logsdon to unveil signs marking a stretch of Maryland Route 924 as “Heroes Highway.” 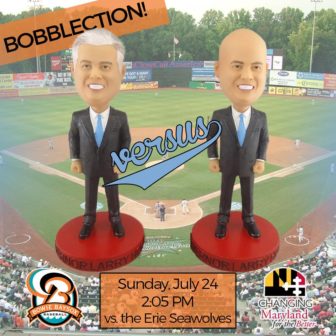 BOBBLE-HOGANS CAMPAIGN: Gov. Larry Hogan and the minor-league Bowie Baysox baseball team are raising cancer awareness with the help of two bobbleheads: one depicting the chief executive bald and the other with hair, reports the AP’s Brian Witte in the Sun. The first 1,000 fans 18 or older will choose between the bobbleheads, and the one that runs out first will be declared winner of the “Bobblection.”

GOOD ENVIRO MARKS FOR AA’s SCHUH, COUNCIL: Anne Arundel County Executive Steve Schuh and a majority of County Council members made the grade when it comes to supporting the environment, according to a new report from a local conservation group. Amanda Yeager of the Annapolis Capital writes that the Republican executive received a B- from the Maryland League of Conservation Voters’ Anne Arundel County chapter for his leadership and positions on green issues between December 2014 — the month he took office — and May 2016.

STATE GIVES ARUNDEL $2.7M FOR WATERWAYS: The state recently awarded Anne Arundel County more than $2.7 million for projects designed to improve local waterways, reports Christina Jedra for the Annapolis Capital. The grants, from the State Highway Administration and the Department of Natural Resources, will be used by the county’s Watershed Protection and Restoration Program. Officials will implement two stream restoration projects and retrofit three stormwater management ponds, the program said.

KITTLEMAN ON HOWARD COUNTY: In another installment of Focus on the Counties, Tom Hall of WYPR-FM speaks with Howard County Executive Allan Kittleman. Kittleman discusses how the county is addressing transit and education concerns brought on by the influx of people. Kittleman, who is a Republican, weighs in on the future of the Republican party, why he won’t attend the Convention this time around, and his decision not to endorse Donald Trump.

DEM PLATFORM AND PALESTINE: In an opinion piece for MarylandReporter.com, former Del. Saqib Ali and Sammy Al-Qassem, of Baltimore Palestine Solidarity, write that one of the more contentious issues debated at the Democratic Party Platform committee was the party’s position on the Israeli/Palestinian conflict. For too long, the Democratic Party Platform has been silent — or worse, hypocritical — on the human rights of Palestinians. It’s time to end this hypocrisy.

EDITOR’S NOTE: The best argument for installing ad blocking app is the Baltimore Sun website, even if you’re a subscriber. Same goes for Verizon FIOS TV.