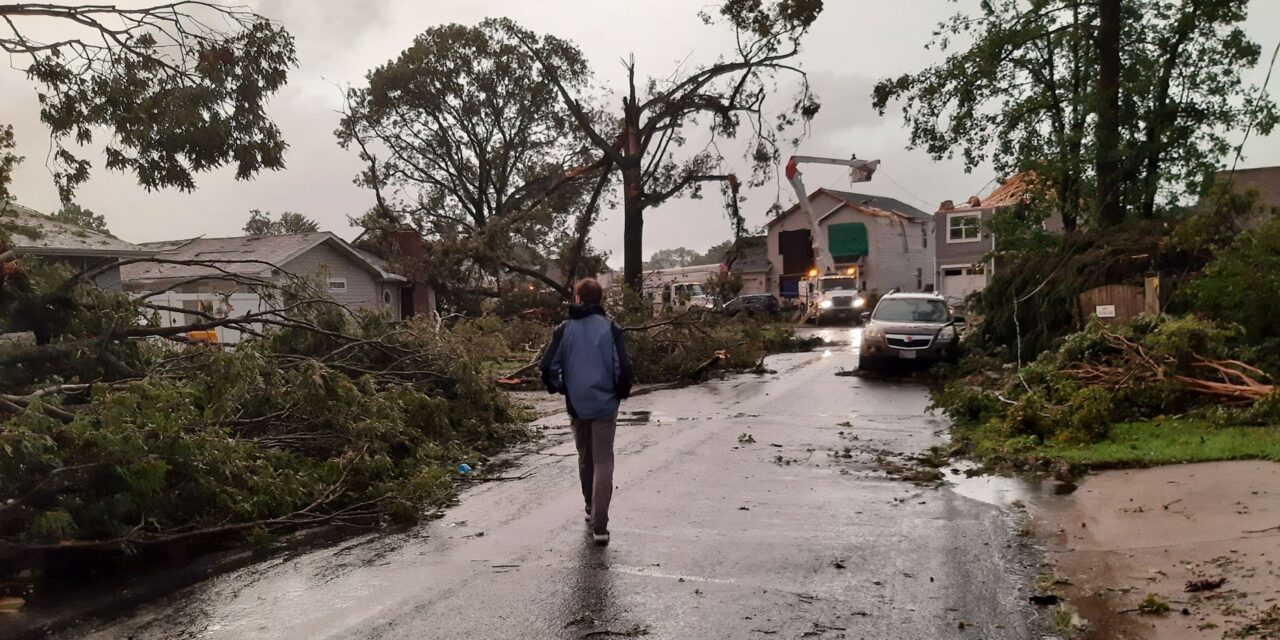 IDA SPURS TORNADOES IN ANNAPOLIS, CHARLES CO., FLOODING ELSEWHERE : After a tornado tore through parts of Anne Arundel County – including the state capital – and Tropical Depression Ida brought heavy rain to Maryland on Wednesday afternoon, various public services will be either halted or limited Thursday as officials continue to handle cleanup efforts, Phil Davis of the Sun reports.

ELRICH PUSHES VACCINE PASSPORTS: Montgomery County Executive Marc Elrich Wednesday emphasized the need for the implementation of a vaccine passport program to help reduce the spread of the Delta variant and to help mitigate fears of exposure, reports Bryan Renbaum for MarylandReporter. Though the county has the best vaccination metrics in the state, according to the CDC, its seven-day community transmission rate has been upgraded by that agency from “substantial risk” to “high risk.”

HOGAN BLASTS CITY’s LACK OF SCHOOL AC: Frustrated that some Baltimore public school students were sent home early on the first day of class due to hot weather, Gov. Larry Hogan blasted city and school leaders on Wednesday for not ensuring all buildings are fully air-conditioned, Pamela Wood of the Sun reports.

***Transformation to the Grid of the Future: Regulators are implementing directives to transform the grid for the future. What impacts can ratepayers and consumers expect to result from FERC Order 2222 and Maryland Order PC 44? This FREE webinar on September 14th examines the deployment of distributed resource markets for load balancing and reliability, and kicks off the Maryland Clean Energy Center’s Connecting to the Energy Economy Speaker Series.***

FEAR OF FLU OUTBREAK: Fears of an influenza outbreak on top of the COVID-19 pandemic never materialized last fall. Thanks to masking, social distancing and quarantining, flu was all but nonexistent. But now kids are returning to school and adults are going back to the office and few doctors and public health experts think the state or country will escape the flu, along with its fevers and body aches, again this year, Meredith Cohn and Hallie Miller of Sun report.

HOSPITAL WORKERS DUE FOR VAXX: Gov. Larry Hogan’s deadline for Maryland hospital and nursing home workers to get at least their first dose of COVID-19 vaccine passed Wednesday. And a doctor at one hospital says workers there are close to meeting that goal, Sarah Kim for WYPR-FM reports.

9 NOMINATED TO EDUCATION ACCOUNTABILITY BOARD: A nominating committee announced nine nominees to an accountability board tasked with ensuring the success of the Blueprint for Maryland’s Future education reforms on Wednesday, but one lawmaker contends that they do not fully represent the state of Maryland, Elizabeth Shwe reports for Maryland Matters.

STATE SETTLES LAWSUIT WITH VISUALLY IMPAIRED VOTERS: The state of Maryland will pay $230,000 to settle a lawsuit brought by visually impaired voters and the National Federation of the Blind that alleged the state’s electronic voting machines compromised voter secrecy and violated the Americans with Disabilities Act, reports Pamela Wood of the Sun.

CARROLL AIRPORT GETS FEDERAL FUNDS: The Carroll County Regional Airport will soon get safety improvements to the northern section of its runway after a recent award of federal dollars. U.S. Sens. Chris Van Hollen and Ben Cardin and Rep. Jamie Raskin on Tuesday announced $260,000 in federal funding for the airport, including $26,000 in American Rescue Plan funds, reports Madison Bateman for the Carroll County Times.

STATE HIGH COURT TO HEAR VIOLENT JUVIE CASE: Maryland’s top court opened its 2021-2022 session Wednesday, a term in which it will take up the appeal of a Beltway sniper in considering whether the state constitution permits violent juvenile offenders ever to be sentenced to life without parole, Steve Lash of the Daily Record reports.

RASKIN PENS MEMOIR: U.S. Rep. Jamie Raskin of Maryland is working on a memoir in which he will reflect on the Jan. 6 siege of the Capitol and the tragedy he suffered a week earlier when his 25-year-old son Tommy killed himself, Hillel Italie of the Associated Press writes. The book is called “Unthinkable: Trauma, Truth, and the Trials of American Democracy,” which Harper will publish Jan. 4.

MORE CHARGES AGAINST BA CO MAN AT JAN. 6 INSURRECTION: A 43-year-old Nottingham man charged with storming the U.S. Capitol on Jan. 6 is facing additional charges after investigators found illegal firearms and drugs as part of their search for evidence of his role in the insurrection, Justin Fenton of the Sun reports.