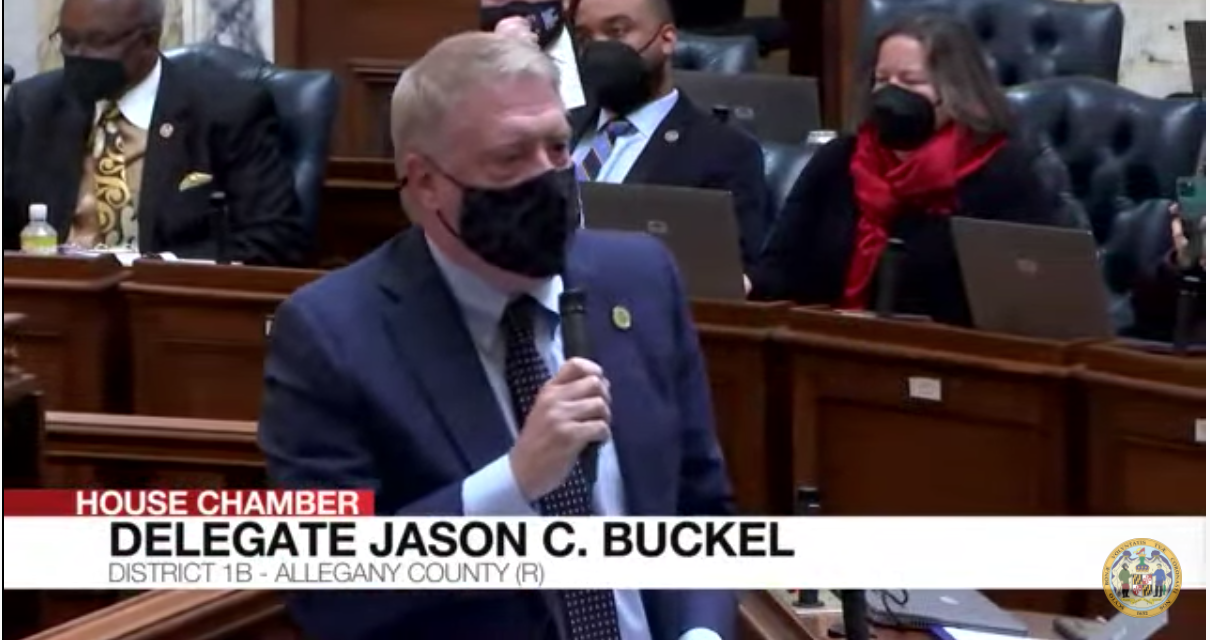 The House of Delegates Tuesday evening voted to approve a congressional redistricting plan that is favored by Democrats and was crafted by a bipartisan legislative commission.

The 97-42 vote was preceded earlier in the day by an intense floor debate led by Minority Leader Jason Buckel, R-Allegany, who had introduced an amendment that would have substituted the legislative commission’s redistricting map with that of a map produced by an independent citizen’s redistricting commission whose members were appointed by Gov. Larry Hogan.

The defeat of Buckel’s amendment came less a day after a House committee declined to advance the citizen’s redistricting commission plan.

“HB001 stretches two congressional districts, from Montgomery County virtually from the D.C. line to the Pennsylvania line. In one case all the way to the Susquehanna River and the border between Cecil County and Harford County,” Buckel said of the legislative commission’s map during the debate.

Buckel added: “Communities of interest is an interesting concept. I guess you could stretch it to whatever your mind will allow you to in good faith. But no one could suggest in good conscience that people who live on the Susquehanna River in Havre de Grace consider themselves to be a community of interest with people in Montgomery County a few miles from the D.C. line.”

Buckel insisted that his amendment was not “partisan” in nature and that its adoption would conform with legal guidelines and basic principles of fairness.

Moreover, Buckel acknowledged that while Democrats in Maryland have supported the creation of what are generally considered to be gerrymandered congressional districts, Republicans are guilty of the same offense in other states such as Texas.

“If you pass this amendment you are supporting free elections.”

But not everyone saw it that way.

Del. Eric Luedtke, D-Montgomery, who is the majority leader, said the General Assembly’s map is both fair and appropriate.

Del. C.T. Wilson, D-Charles, refuted a claim by a Republican delegate that the citizens’ commission redistricting map was not given fair consideration on Monday.

“The governor did have a plan and he presented it. And to say that he did not get respect is erroneous because he got a hearing. Just because we did not do what he liked. That does not mean that there is something illegal going on. We keep talking about fact versus feeling. But our constitution does not support that feeling. Because we are the voice of the people. He (Hogan) may have appointed the body that drew their maps. But we are the voice. We are the people’s legislature.”

Wilson noted that the physical shape of the state of Maryland is awkward and that that is why some congressional districts do not have what appear to be natural-looking boundaries. Wilson also noted that compliance with the federal Voting Rights Act means that district boundaries must take into account certain factors, such as fair minority representation.

Buckel fired back saying his amendment does not in any way affect minority representation.

“That is not my amendment. From any perspective, to suggest that the map that was created by the citizens of the state of Maryland through independent nonpartisan commission packs or cracks or dilutes minority voting rights whatsoever-it will result in the same number of Voting Rights Act districts of what currently exists and it will likely result in the election of the same individuals who exist from those communities where the minority population makes up of the majority of the community of that political subdivision.”

What to do about Baltimore’s high taxes