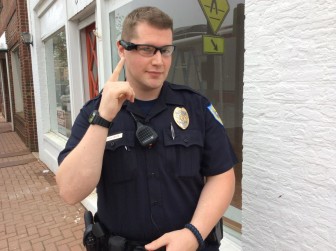 An overwhelming majority of Marylanders support requiring police to wear body cameras, according to a new statewide poll.

With police behavior gaining new attention in the past year, especially in Maryland after the death of Freddie Gray in police custody, the new Goucher College poll asked residents a series of question about policing in their communities.

Mileah Kromer, director of the Sarah T. Hughes Field Politics at Goucher and the poll director, said the vast support for police body cameras across party, gender, age and race was unusual. The highest support came from African-Americans (96%) and the lowest among Republican voters (74%).

There was also broad agreement with the statement that “in general, police officers are respected in your community.” Eighty-two percent (82%) of poll respondents agreed, including 77% of African-Americans and 86% of whites.

The poll surveyed 545 people by cell phone (64%) and landline (36%) from Feb. 13 to 17, and has a margin of error of 4.2% overall. The full 28-page poll report details its methodology, demographics and cross-tabulations by party, gender, race and age.

There were racial divisions on other policing issues.

**49% percent of all Marylanders agree that “people of all races receive equal treatment by the police in your community.” But only 38% of African-Americans agree with that statement, while 57% of whites agree.

**58% of Marylanders agree that “police in your community are held accountable for misconduct.” 70% of whites agree, but only 39% of blacks do.

**54% of Marylanders agree that “police officers should be required to live in the communities in which they serve,” a view held by two-thirds of African-Americans (66%), and but less than half of whites (44%).

Board of Public Works discusses funding for future dam repairs