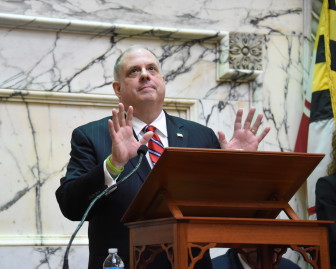 Gov. Larry Hogan at Feb. 3 State of the State address.

The fourth statewide poll in five months shows Gov. Larry Hogan with high approval ratings — 63% of Marylanders approve of the job he is doing.

Three other public polls taken since October by the Washington Post, the Baltimore Sun and Gonzales Research have all shown Hogan’s approval at 61% or higher.

But the telephone survey taken last week also shows that there is still a partisan divide on many issues that the Republican governor must navigate to maintain his popularity.

Hogan’s approval is highest among Republicans (86%) and independents (69%), but even half of Democrats (50%) approve of the job he is doing.

The governor has a much higher approval rating than the Maryland General Assembly — 44% approve of the job the state legislature is doing and 31% disapprove, and 23% don’t know.

The poll surveyed 545 people by cell phone (64%) and landline (36%) from Feb. 13 to 17, and has a margin of error of 4.2% overall. The full 28-page poll report details its methodology, demographics and cross-tabulations by party, gender, race and age.

One set of questions on the political parties shows that partisan divides continue among Marylanders.

“Partisanship is still alive and well,” says Mileah Kromer, director of the Sarah T. Hughes Field Politics at Goucher and the poll director. “This sustained support [for Hogan] is particularly impressive given the partisan lean of the state.”

Read a series of statements about the two parties, respondents generally favored the Democratic Party.

**55% said the Democratic Party “is more responsive to the needs of people like you”;

**52% say Democrats are “more willing to work with the other party”;

**42% said the Democratic Party “governs in a more honest and ethical way” — though 21% said this best describes neither party.

**57% said Republican Party “is more extreme in its positions.”

The closest tally comparing the parties was about which one “can better manage the state government,” where 45% chose Democrats and 35% chose Republicans.

“I think that narrowing gap reflects Larry Hogan,” said Kromer. But on the other issues rating the parties, “These things don’t really hurt his approval numbers.”

On some public policy issues, Marylanders are very clear, particularly on education.

Hogan continually touts his “record spending on education,” and as well as next year’s full funding of school aid formulas, as the legislature forced him to do.

People are more divided on transportation spending. Fifty-six percent of residents say the state should focus more on improving roads and highways (as Hogan has done) and 39% says the focus should be on improving public transit (for which Hogan has cut or scaled back large projects.)

On drawing of congressional and legislative district lines, three out of four Marylanders (75%) support drawing of the lines by an independent commission as Hogan has proposed.

“For his approval ratings to go down, there has to be some departure on the policy level,” Mileah said, meaning there would have to be “some difference between what public wants on the policy level” and the way Hogan is governing.

Democrats have tried to make a case against him on such issues as withholding funding for schools and mass transit, but the arguments so far have not changed many voters opinion of Hogan.