With just 34 days remaining till the April 3 primary, the bulk of political forums and debates scheduled for the 6th Congressional District will take place in Montgomery, Frederick and Washington counties. This includes the Sunday, March 25 AARP-MarylandReporter.com debate with almost all the candidates of both parties hosted by Montgomery College’s Germantown campus.

“AARP Maryland is happy to work with MarylandReporter.com to offer voters in the 6th Congressional District of Maryland an opportunity to take a closer look at the candidates during these debates,” said AARP Maryland State Director Hank Greenberg. “We invite all to attend.”

Once a long standing Republican stronghold, the 6th Congressional District race is now considered a toss-up after the 2011 Democratic-led redistricting process. Ten-term Republican Congressman Roscoe Bartlett has been placed in an incumbent protection program, and 12 candidates are vying for a seat widely believed to be carved out specifically for Senate Majority Leader Rob Garagiola.

“I am looking forward to speaking directly to voters at the Maryland Reporter-AARP debate,” said Congressman Roscoe Bartlett. “It will give me the chance to spread my message of lower taxes and responsible government.”

After redistricting by Gov. Martin O’Malley and approved by the General Assembly in October, the percentage of registered Republicans in the 6th District went down from 47% to 34%, while registered Democrats increased from 36% to 44%, according to data from the State Board of Elections.

The newly drawn district now crosses over five counties from Potomac in Montgomery County to Maryland’s far western border in Garrett County and includes 413,163 registered voters. It no longer encompasses much of northern Frederick County or any part of Carroll County, GOP strongholds in the old district for over 40 years.

The district now has 141,000 registered Republicans, compared to 208,000 in 2010, a 32% drop. The number of registered Democrats increased 14%, from 160,000 to 183,000. And registered “Unaffiliated” voters – often referred to as independents in Maryland – grew from 16% to 21% of the district’s voting population. The Capitol Hill newspaper Roll Call currently rates the race as “Leans Democrat,” as does the Rothenberg Political Report and the Cook Political Report.

“For the first time in a very long time, the 6th Congressional District is competitive for Democrats,” said Myrna Whitworth, chair of the Frederick County Democratic Central Committee.

Democrats now hold six of the state’s eight congressional seats, but Bartlett’s seat was  targeted during redistricting — a strategy spearheaded by Rep. Donna Edwards, chair of the Democratic Congressional Campaign Committee’s Red to Blue program. The 6th is one of 18 races around the country targeted by the program.

Details of the debate

The debates will be videotaped and air 10 times prior to the April 3 primary election on Montgomery College Channel 10, beginning Monday, March 26. They will also be posted on the Montgomery College YouTube channel and by MarylandReporter.com and AARP’s website. The campus theater can accommodate 500 guests and AARP will serve refreshments between debates.

All 6th District registered candidates were invited to participate. With the exception of one Republican, Joseph Krysztoforksi, the following candidates have confirmed their attendance:

This week, the Frederick County Democratic Central Committee and the Frederick Young Democrats will host a “Meet the Candidates” forum in Frederick on Feb. 29 at 6 p.m. And on Wednesday, March 21, Maryland Reporter’s Len Lazarick will moderate the 15th Legislative District Republican Candidates Forum at Wooton High School in Rockville.

Other, but not all, upcoming candidate debates and forums in the 6th Congressional District are listed below:

AARP, MarylandReporter.com, the League of Women Voters and the Gaithersburg Chamber of Commerce will be promoting the March 25 AARP-Maryland Reporter debates. 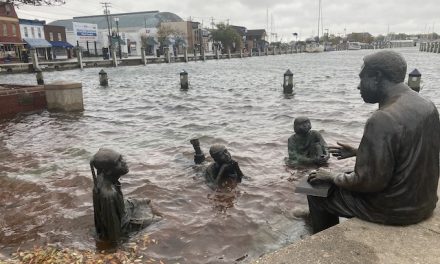