Senate President Mike Miller, 75, on opening day Jan. 10, beginning his 32nd year as presiding officer, the longest in the U.S. He has sometimes referred to himself as "the poster child for term limits." Governor's office photo.

Term limits for Maryland legislators are a great idea whose time will never come. That’s particularly true of Gov. Larry Hogan’s proposal for a two-term limit on Maryland lawmakers.

That could actually make things worse at the State House.

Even Republican legislators who repeatedly do the heavy lifting for their Republican governor think the idea stinks — off the record, of course.

One of several GOP stalwarts running for a fourth or fifth term chewed my ear off on opening day. “I have primary opponents,” the lawmaker said. “They’re going to use this against me.” 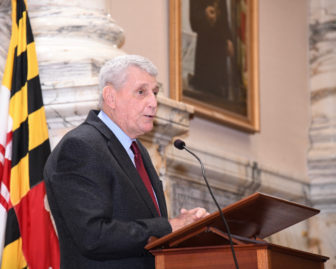 House Speaker Michael Busch, 71, on opening day Jan. 10, beginning his 16th year as speaker. After a liver transplant from his sister in May, Busch is looking stronger and healthier than he has in a year. Governor’s office photo.

The current leadership would be replaced with delegates and senators with at most four years of experience. And don’t forget that this is not a full-time legislature. It only meets for 13 weeks, so after four years a Maryland delegate or senator has only spent about a full year actually legislating — unlike states such as Pennsylvania or New York that meet year round.

Senior citizens at the top

The Democratic leadership of the Maryland General Assembly has certainly been around far too long for our own good.

Since the great television reporter Lou Davis of MPT passed away in 2016, I am the oldest member of the regular State House press corps at 69. I have known many of these 70-something lawmakers for decades. People 70 and older still have a lot to contribute. But they should not hold onto power for so long.

Heard it all before

By the time you’ve been at the legislature for a decade or more — this is my 13th session in a row for two different news organizations — you’ve heard the same arguments on the same bills over and over. As you get older you’re less likely to change your mind about an issue or change your approach.

On the other hand, someone with only four General Assembly sessions under their belt is just figuring out how the legislature works.

I personally favor something like a four-term limit, 16 years giving you enough time to learn the ropes, but not so long as to accumulate too much power. Proponents of term limits find a four-term limit ridiculous, and most longtime legislators find any term limits preposterous.

“That’s what elections are for,” is the repeated comeback. But voters represented by a powerful legislator like Miller, Busch or McIntosh have no reason to throw out a powerful incumbent who could be helpful to them or their district.

15 states have limits, most have ballot initiative

Fifteen states have term limits for legislators, mostly eight years for each chamber. The National Council of State Legislators has a useful primer on the topic.

Maryland does not have the citizen initiative, and no way is the legislature going to impose a two-term limit on itself. It would require a constitutional amendment that takes a super majority to pass.

Opponents of limits say they would cede control of the legislative process to staff and lobbyists, who already have too much control.

And Republican leaders who are much younger than their Democratic counterparts will tell you that getting rid of the 70-somethings in leadership would not improve things for the minority party or conservatives.

The people who replace Miller, Busch, Kasemeyer, Middleton or McFadden would generally be more liberal than the old timers as the newer Democrats have moved further to the left.

Hogan rejects pressure for school aid, but surrenders in the long term