The floor of the New York Stock Exchange. Photo by Scott Beale of ScottBeale.org and Laughing Squid with Flickr Creative Commons License 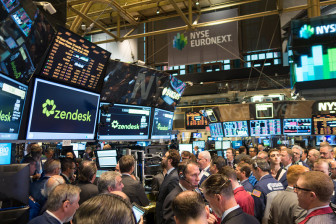 The floor of the New York Stock Exchange. Photo by Scott Beale of ScottBeale.org and Laughing Squid with Flickr Creative Commons License

Tumbling oil prices, a bear market for stock and 401(k) investors and a sharp economic pullback in China and other developing countries could wreak havoc in Maryland as Gov. Larry Hogan prepares to release his budget for the coming fiscal year.

Even before lawmakers get a chance to analyze what’s in Hogan’s conservative spending plan, the state’s revenue assumptions for the next 18 months could be out of date.

Budget projections made by the state’s Board of Revenue Estimates just a month ago have been eclipsed by the worst-ever start-of-the-year results on Wall Street, historic drops in oil prices and stock market losses totaling a staggering $2.5 trillion in just two weeks.

This bad news comes at a terrible time for Hogan. His budget already has gone to the printers. It’s too late to make adjustments. His fiscal blueprint could be out of sync with January’s realities.

Indeed, if this worldwide gloom persists, the modest economic growth anticipated by Hogan might prove optimistic. The governor’s spending and tax-cut proposals might have to be drastically reduced – even with a large surplus in the bank.

Maryland’s economy is tied to what happens nationally and internationally.

A sharp slowdown in China’s trade hurts the Port of Baltimore and BWI Airport. Ditto for the laggard economic activity in Europe and in emerging countries.

The oil glut is leading to 250,000 layoffs in the energy sector, which will mean less work for contractors, subcontractors and suppliers throughout the country, including Maryland.

Maryland’s income tax receipts will be hurt by the plunge in stock prices. Alarmed consumers, already unnerved by talk of terrorist attacks, could continue to rein in their spending, which hurts sales tax collections.

Economists aren’t yet predicting that international woes will lead to a second Great Recession.

But weak growth could make it exceedingly difficult for Hogan to carry out his pledge to cut taxes.

While the Republican governor will propose over $400 million in tax cuts in his address to the Maryland General Assembly this week, Democratic lawmakers aren’t likely to support them if economic conditions make those tax cuts unsupportable.

The best news for Hogan would be if the current batch of bad news is replaced by a sharp and lengthy bounce-back on Wall Street and an uptick in consumer spending. The U.S. economy, after all, is in far better shape than the rest of the world.

Still, we live in an era of instant international linkage. What happens in China or France or Iran or Russia affects the U.S. economy. As journalist Thomas Friedman famously wrote, “The world is flat.”

Hogan has little, if any, control over Maryland’s overall economic well-being. He can’t stop the panicked selling on China’s stock exchange, or Iran dumping more oil exports on an oversaturated world petroleum market or a Republican Congress ratcheting down federal aid to the states.

Lower gas prices were supposed to stimulate consumer spending as drivers fill up their vehicles far more cheaply. Yet so far no such bump has occurred.

Low or no growth

Shaun Driscoll, who manages T. Rowe Price’s New Era Fund, predicts low gasoline prices could persist for the next six months and the oversupply of petroleum might linger for a couple of years.

The U.S. could find itself in a sustained period of low growth or no growth. For Hogan, that would make tax cuts problematic not only this year but in the immediate future, too.

Those observations came before the history-making plunge on Wall Street and disappointing economic news from China.

Volatility around the globe and at home makes it tough for elected officials to accurately predict the future. Extreme caution may become the watchword as budget deliberations begin in Annapolis.

CORRECTED: Seven senators get free ride to reelection; Rupli returns to the fray