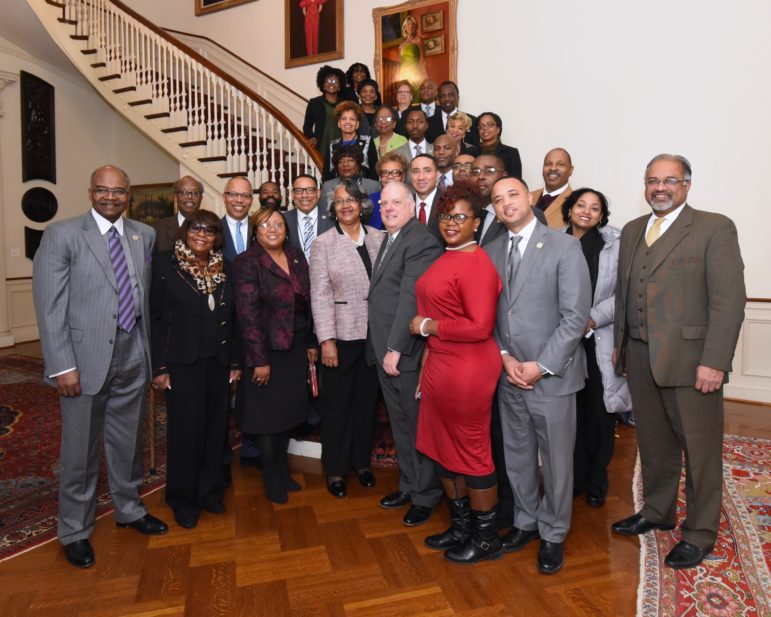 MARKING MLK DAY: Members of the Legislative Black Caucus had their annual breakfast with Gov. Larry Hogan last Thursday. The governor and members are scheduled to lay a wreath tonight at the tree in front of the State House planted in honor of Martin Luther King Jr. Governor’s office photo

SICK LEAVE LAW TO TAKE EFFECT: Maryland on Friday became the ninth state in the country to require paid sick leave and the second to bar colleges from asking prospective students about their criminal histories after Democrats easily overrode two 2017 vetoes by Republican Gov. Larry Hogan. Both bills were top priorities of progressive advocacy groups, Ovetta Wiggins of the Post is reporting.

SPONSOR SEEKS IMPLEMENTATION DELAY: The Senate sponsor of a new law mandating paid sick leave called for a 90-day delay in its implementation, writes Bryan Sears for the Daily Record. Sen. Mac Middleton, chairman of the Senate Finance Committee, said he plans to introduce legislation as early as next week that would push off implementation of the new law. Without the change, businesses would be required to follow the new law in 30 days, which he said is just too quick for most businesses to comply with.

TERM LIMITS? WON’T HAPPEN: Term limits for Maryland legislators are a great idea whose time will never come. That’s particularly true of Gov. Larry Hogan’s proposal for a two-term limit on Maryland lawmakers. That could actually make things worse at the State House, writes Len Lazarick in a news analysis for MarylandReporter. Even Republican legislators who repeatedly do the heavy lifting for their Republican governor think the idea stinks — off the record, of course.

BOAT MAINTENANCE SAFETY BILLS: Parents whose son died of carbon monoxide poisoning while working on a shrink-wrapped boat are partnering with the Sen. Ed Reilly to present two bills to the General Assembly, Chase Cook writes for the Annapolis Capital. One would require education and instruction on carbon monoxide safety and poisoning prevention as well as require placement of carbon monoxide warning labels and detection systems on vessels with enclosed accommodation compartments. The second is would prohibit businesses from winterizing boats that have already been shrink-wrapped.

STEELE, KAGAN JOIN ANTI-TRUMP DRUMBEAT: A Maryland senator who represents Montgomery County, where a third of the residents are foreign-born, called on her colleagues on Friday to condemn President Trump for using the word “shithole” to describe Haiti, El Salvador and African countries. “Maryland is better than we are seeing right now in this White House,” Sen. Cheryl Kagan, a Democrat, said on the Senate floor. Ovetta Wiggins reports the story for the Post.

RELIEF FROM TAX OVERHAUL: Hundreds of thousands of Maryland households will pay more in taxes in 2019 because of the federal tax overhaul, according to Democrats in the state’s congressional delegation, who on Friday challenged Gov. Larry Hogan (R) to provide relief, Bruce DePuyt of Maryland Matters reports. More Maryland residents — 87% or 1.3 million households — deduct state and local taxes on their federal returns than any other state in the nation, an average of $12,930 per family. The new law caps those deductions at $10,000.

NATIONAL GOP COMES TO MD: National Republican groups are weighing major election spending in 2018 in deeply blue Maryland, where they hope the popularity of Gov. Larry Hogan could insulate the party from backlash against President Trump. Whoever controls the governor’s mansion will oversee redistricting after the 2020 Census, potentially shifting the political balance of power in the state for years to come, Josh Hicks of the Post reports.

***THERE’S NO OFF-SEASON FOR MARYLAND’S LIVESTOCK FARMERS: Taking care of livestock is a year-round business for Maryland farmers Benson and Jamie Tiralla. Farmer’s markets may be closed, but when winter hits, the Tirallas are just as busy. Farmers across the state are maintaining their farms and preparing for the coming season in order to keep this $8.25 billion industry thriving. Here’s the Tiralla’s story. SPONSORED CONTENT***

CORDERMAN ALREADY FACES OPPOSITION: Tamela Baker of the Hagerstown Herald-Mail, notes that new Del. Paul Corderman, R-Washington, had barely gotten his seat warm in the House of Delegates when Peter Perini, chairman of the Washington County Democratic Central Committee, filed to run for his District 2B office in the Maryland primary.

NEWCOMER TO DELEGATE RACE: When education consultant Jaye Espy of Potomac files Friday for District 15 delegate, it will be her first run for elected office. But Espy, 47, was all but born into politics—as a member of one of Mississippi’s leading political families, Louis Peck and Andrew Schotz of Bethesda Beat report.

CHELSEA MANNING TO RUN FOR SENATE: Chelsea E. Manning, the transgender former Army private who was convicted of passing sensitive government documents to WikiLeaks, is seeking to run for the U.S. Senate in Maryland, according to federal election filings, Justin Jouvenal and Jenna Portnoy of the Post are reporting.

MOSSBURG DROPS HOUSE BID: A former Maryland state delegate who was seeking the Republican nomination to replace outgoing Democrat John Delaney in the U.S. House dropped out of that race Friday, saying he wants to focus exclusively on efforts to curtail the opioid epidemic. Matt Mossburg, who served one term in the Maryland General Assembly in the 1990s, is a recovering opioid addict. He said running for Congress hindered his efforts to lobby for the issue in Annapolis, Jenna Portnoy of the Post reports.

TRONE PROTESTS: Two political protests are being staged this week against 6th District Democratic congressional candidate David Trone over his political stance on Palestine, writes Ryan Miner for his Miner Detail blog. For one, a Palestinian solidarity organization is joining forces with Baltimore Jewish Voice for Peace, which addresses issues of human rights and the occupation of Palestine, to protest Trone’s “anti-Palestinian position” and his “strong support for the Cardin Anti-BDS bill.

SCHUH’s MONEY, POORLY SPENT: The editorial board of the Annapolis Capital is calling on Anne Arundel County Executive Steve Schuh to use his hefty campaign coffers of $1 million for anything other than the mean-spirited flier campaign in the Annapolis election last year, run by a political action committee called Preserve Annapolis, to which her contributed $6,000. If Schuh uses his cash to bankroll similarly nasty tactics in 2018, those who aren’t on team Schuh can look forward to name calling and innuendo. It is not a recipe for victory.

GARY HUDDLES DIES: Gary Huddles, who served four terms on the Baltimore County Council and was once viewed as a candidate for statewide political office, died Wednesday of Alzheimer’s disease at Arden Court in Pikesville. He was 78, writes Jacques Kelly for the Sun. “Most of his friends thought he would be Baltimore’s County’s first Jewish county executive,” said a son, Kirk Huddles of Baltimore. “He became embroiled with Jeffrey Levitt, and that derailed his political career.”