Two-thirds of all voters (67%) in a new poll taken last week approve of the job Gov. Larry Hogan is doing and only 19% disapprove, a higher approval rating than ever achieved by either of his two predecessors.

Three out of five voters (60%) believe Maryland is headed in the right direction, while 22% say the state is headed on the wrong track, with 18% giving no answer. (Full poll results here.)

Veteran pollster Patrick Gonzales called the rating “extremely impressive.” He compared it with Republican Gov. Bob Ehrlich’s “high-water mark” during his four-year term of 57% approval in August 2003, with 30% disapproving.

Gov. Martin O’Malley highest rating in his eight years in office was 58% in January 2011, shortly after his re-election in a rematch with Ehrlich, and 30% disapproved.

Hogan gets particularly high marks from Republicans (94%) and independents (78%). Almost half of Democrats (49%) approve of the job he is doing.

Hogan also does well with men, women and whites. Only among African Americans does he fall short, with 40% of blacks approving of the job he’s doing, and 38% disapproving. 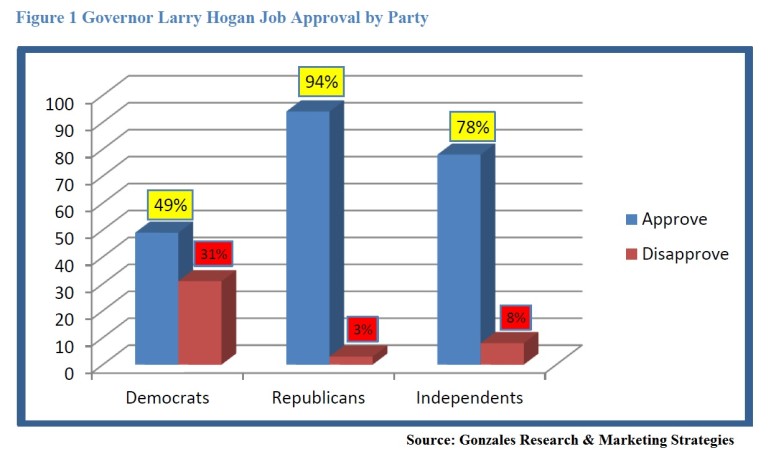 In previous polling, Hogan had 58% approval in an October Goucher College poll, a Washington Post-University of Maryland poll in October had him at 61%, and a November Baltimore Sun poll gave him 63% approval.

The latest poll numbers confirm the general impression at the State House that the new governor is very popular as he celebrates his first year in office and a successful battle with cancer. This could give him leverage with the legislature.

However, the high numbers also show Democrats that they need to do a more effective job driving his approval rating down, since their persistent attacks of his withholding $68 million in education funding have not worked.

The poll was taken Jan. 11-16, contacting 819 registered voters by both landline and cell phone. The margin of error is 3.5%, meaning that there is a 95% probability that the figures would fall within this range if all voters were surveyed. 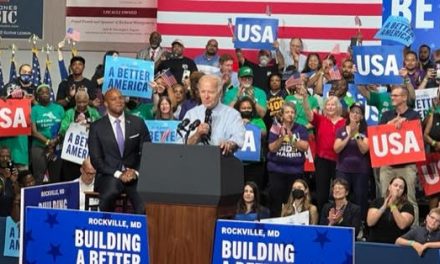