HOGAN GET HIGH MARKS: Two-thirds of all voters (67%) in a new poll taken last week approve of the job Gov. Larry Hogan is doing and only 19% disapprove, a higher approval rating than ever achieved by either of his two predecessors, reports Len Lazarick for MarylandReporter.com. Three out of five voters (60%) believe Maryland is headed in the right direction, while 22% say the state is headed on the wrong track, with 18% giving no answer.

EX-FELONS SEEK VOTING RIGHTS: Proponents of a push to override a Hogan veto that would give ex-felons the right to vote upon release want to make ex-felons feel part of society again, arguing it will help them avoid going back to prison. But opponents say felons need to become productive members of society before they earn back the right to vote, writes Erin Cox for the Sun.

OVERRIDE PLANNED FOR WEDNESDAY: An attempt to override a bill changing how taxes are assessed on online hotel bookings is pitting the Maryland Chamber of Commerce against Republican Gov. Larry Hogan and has some Republican legislators rankled, writes Bryan Sears for the Daily Record. The bill is one of six that are scheduled for veto-override votes on Wednesday and part of a test some legislators see an indication of whether the Democrat-controlled House and Senate plan to work with the governor this session.

DIE-IN PROTESTS POLICE BRUTALITY: Dozens of bundled-up protesters, holding unlit candles in their gloved hands, walked to the center of Lawyer’s Mall in the bitter cold Monday night as the names of victims of police brutality in Maryland were read. “Tom, Prince George’s County, white,” a woman read. “Eric, Baltimore City, black.”Ovetta Wiggins of the Post reports that one by one, the protesters lay down on the frigid pavement.

HOGAN PUSHES SHIP TO SHORE UP BIZ PROFILE: Gov. Larry Hogan has pledged $1.5 million in state money over the next three years to the organization that operates the Pride of Baltimore II ship, in hopes of using the vessel to promote the state’s business profile, reports Pamela Wood in the Sun. Hogan announced a public-private partnership Monday that would help Pride of Baltimore Inc. pay for the ship’s activities and “expand its focus on selling Maryland as a strong economic market.”

IN EPIDEMIC, HOGAN CONTROLS VENTILATORS: If a deadly flu epidemic hit Maryland, the governor could decide which patients would be put on life-saving ventilators — and which wouldn’t, reports Meredith Cohn in the Sun. Maryland’s attorney general issued an opinion in December that found that the Catastrophic Health Emergencies Act of 2002 gives the governor the authority to ration the machines that support breathing in flu patients suffering respiratory complications.

MORE CIRCUIT JUDGES SOUGHT: Eight jurisdictions are seeking to add circuit court judges to their ranks through bills cross-filed last week in the General Assembly, Heather Cobun of the Daily Record writes. The legislature has not approved any additional judges since 2013.

HOGAN CELEBRATES KING: Gov. Larry Hogan used an appearance at a breakfast on Martin Luther King Jr. Day to promote his “Change Maryland” agenda, writes Ovetta Wiggins in the Post. “The challenges are formidable, but our will is strong,” Hogan said during opening remarks at the 35th Annual Dr. Martin Luther King Jr. Memorial Breakfast at Anne Arundel Community College on Monday. 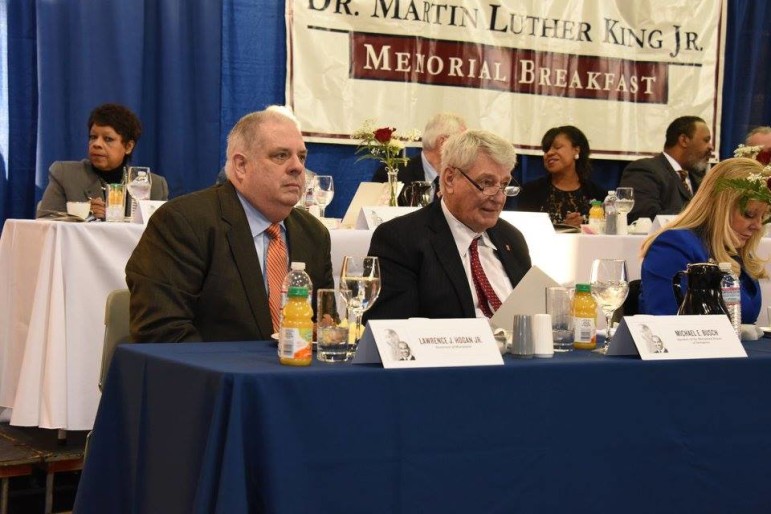 YOUNG DELEGATES TOUT AGENDAS: It’s not freshman year anymore for Catonsville residents Charles Sydnor III and Pat Young. Heading into their second year representing District 44B in the Maryland House of Delegates, the two Democrats have a lot on their minds, mostly focused on their specialties — for Sydnor the Judiciary Committee and for Young the House Appropriations Committee, writes Rachael Pacella for the Baltimore Sun.

AA BOARD CANDIDATE RETURNS: Anne Arundel County school board candidate Timothy Boston is back in the running, writes Amanda Yeager for the Annapolis Capital. Boston, who on Saturday asked the school board nominating commission to withdraw his application, said Sunday he wants to remain a candidate.

POLS REMEMBER NOTED PG ACTIVISTS: A Prince George’s County community activist and former drug dealer who unsuccessfully sought a seat in the Maryland State House died in a vehicle crash early Monday, authorities said. Gregory Antoine Hall, 45, was remembered by Maryland politicians as someone who had overcome a troubled past and used his experiences to encourage young people to make better choices, Arelis Hernández and Ann Marimow report in  the Post.