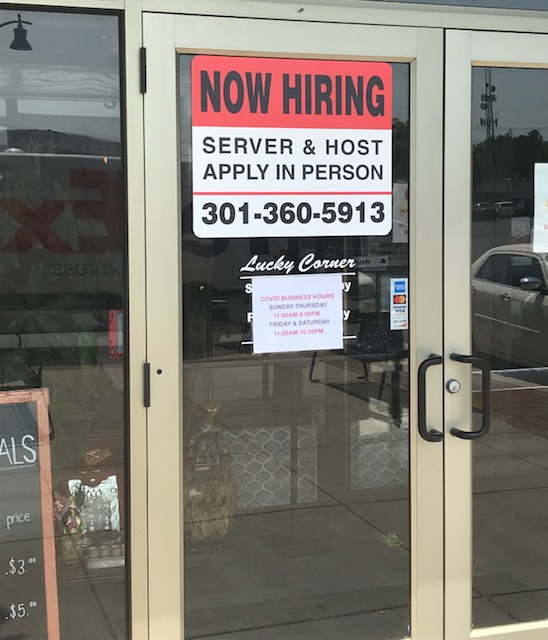 A help wanted sign posted at a restaurant in Frederick (Bryan Renbaum/MarylandReporter.com)

Gov. Larry Hogan’s chief spokesperson said Tuesday that the administration is unlikely to appeal a ruling by a state court that blocks the governor’s decision to bring an early end to Maryland’s participation in federal unemployment benefits.

The order enjoins Hogan and Labor Secretary Tiffany Robinson from “taking any action that will prevent the state of Maryland from receiving any and all expanded and/or supplemental unemployment benefits available to Maryland residents under the Coronavirus Aid, Relief, and Economic Security Act, the American Rescue Plan Act of 2021, or any other existing federal source of unemployment benefits.”

The benefits would have ended on July 3 had Hill not granted a temporary restraining order keeping them in place until July 13. The deadline for termination was then pushed back to mid-August after Robinson testified on Monday that the state would comply with federal rules that because of the lawsuit require an additional 30 days notice prior to the discontinuation of benefits.

That would have left the administration with about three weeks to mount another legal challenge, as the federal benefits will expire on Sept. 6 absent an extension by Congress.

“We fundamentally disagree with today’s decision,” Communications Director Michael Ricci told MarylandReporter.com. “This lawsuit is hurting our small businesses, jeopardizing our economic recovery, and will cause significant job loss. Most states have already ended enhanced benefits, and the White House and the US Department of Labor have affirmed that states have every right to do so. While we firmly believe the law is on our side, actual adjudication of the case would extend beyond the end of the federal programs, foregoing the possibility of pursuing the matter further.”

Ricci added: “With more jobs available than ever before, work search requirements for federal programs will go into effect next week. Claimants must search for work using the Maryland Workforce Exchange, which has over 250,000 jobs available across the state.”

Prior to Ricci’s announcement, several state GOP lawmakers told MarylandReporter.com that they believed today’s ruling likely signaled an end to the state’s battle over the enhanced UI benefits.

“Based on the court’s decision, September 6 is just another three weeks out from August 15,” Del. Haven Shoemaker, R-Carroll, said. “So I don’t know how many legal hoops the state and the governor’s folks are going to want to jump through over three weeks worth of benefits.”

“At this point, by the time this would even make it to trial…I think it’s inevitable. We are in this until September,” Del. Brian Chisholm, R-Anne Arundel, said.

Both Chisholm and Shoemaker said that they expect the ruling to add further hardship to the state’s small businesses, many of which are already struggling to find enough employees just to stay open. And both lawmakers said that they believe that it is ample time for the state to end federal pandemic assistance and for Marylanders to go back to work.

But not everyone said they agree.

“When we think about our working family members, neighbors, and constituents across the state of Maryland, this is a win. When we look at a number of the professions that still have not returned, such as the hospitality, hotel, and food industries…unemployment is their lifeline to survive at this moment. So I am glad that the judge did something that the governor couldn’t do, that Secretary Robinson couldn’t do. And that was to make the right decision and stay on the side of working families.”

Study: Maryland is the 15th worst state for starting a business