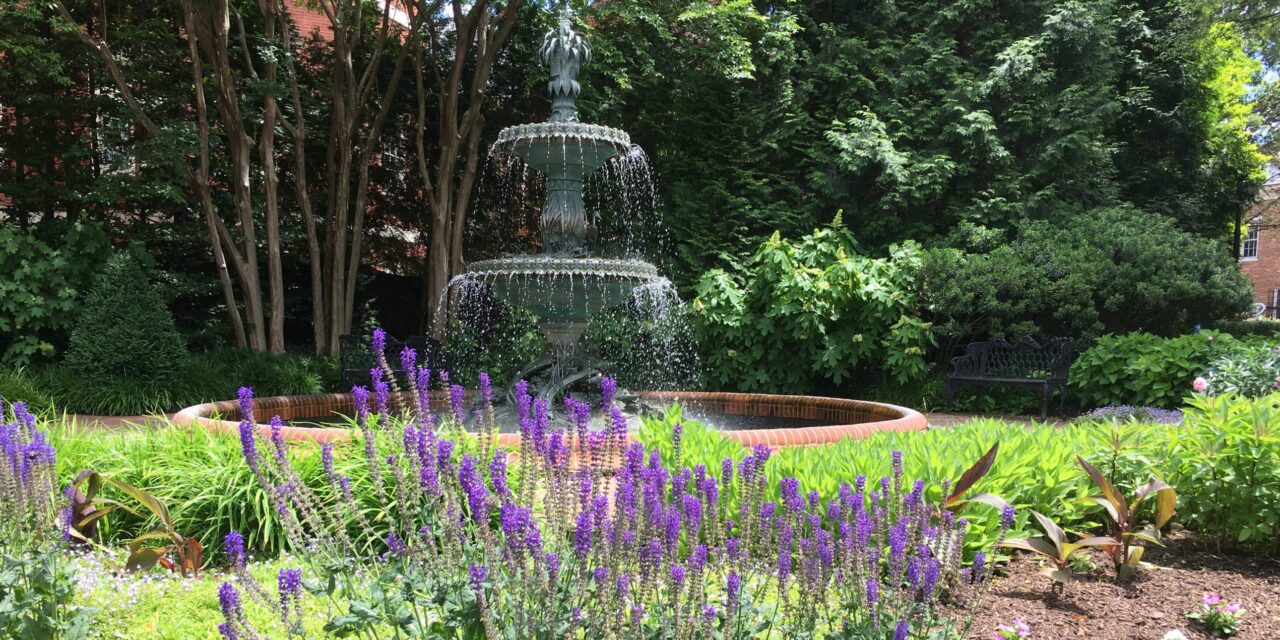 The fountain at the back of Government House., put in by Gov. William Donald Schaefer in honor of his companion Hilda Mae Snoops. MarylandReporter. com photo

RETURN TO MORE REQUIREMENTS FOR JOBLESS BENEFITS: People receiving unemployment benefits in Maryland will soon have to document that they’re looking for a new job as the state joins others around the nation in reinstating work-search requirements. The change will come next month as Maryland also cuts benefits to tens of thousands of unemployed residents covered by federal unemployment programs, Alison Knezevich of the Sun reports. The changes take effect the week of July 4.

FILERS FRUSTRATED WITH CHANGE IN MD UNEMPLOYMENT SYSTEM: An unexpected change in the state’s unemployment system has frustrated Marylanders who are trying to file weekly claims, reports Christine Condon for the Sun.

RENTERS SEEK RELIEF, GO ON STRIKE: Residents of LaSalle Park in Hyattsville have been frustrated by lack of action over rent during the pandemic. Around 20 families would eventually join a rent strike and are withholding their monthly payments until rent relief arrives. Kyle Swenson of the Post writes that rent relief applications went out in March, however, the residents have heard nothing, part of the multimillion dollar logjam local governments are experiencing as they assess millions of claims. Of the $27 million received by Prince George’s County as part of the federal rent relief money, the county had only spent $3.5 million by early May.

HOSPITALIZATIONS, POSITIVITY RATE CONTINUE DOWN: Maryland health officials reported 104 new cases of the coronavirus and five more deaths Sunday. The state reported that 283 people are currently hospitalized in Maryland due to complications from COVID-19, 19 fewer than a day prior. It’s the first time fewer than 300 people were hospitalized since Sept. 20. The statewide seven-day average positivity rate is now at 1.22%, down from 1.3% the day before. Phil Davis reports in the Sun.

MARYLAND LIMITS POLICE USE OF GENEALOGY WEBSITES: Beginning Oct. 1, police may use consumer genealogy websites only for serious violent crimes such as murder and rape, only after they exhaust other investigatory methods, and only under the supervision of a judge, Tim Prudente of the Sun reports.

MARYLAND TO ALLOW STUDENT ATHLETES TO PROFIT FROM IMAGE: A seismic shift will rock college sports next month, when a handful of new state laws go into effect allowing student athletes to make money off their personal images, Laura Olson of Maryland Matters reports. It’s been against the rules governing collegiate sports for student athletes to make a profit off their name or image — a practice that’s commonplace in professional sports.

8 SCHOOL SYSTEMS JOIN APPRENTICESHIP PROGRAMS: Eight public school systems in Maryland have joined the state’s Youth Apprenticeship Program since the beginning of 2020, bringing the total number of participating jurisdictions up to 20. The program pairs Maryland high school students with employers in a variety of fields, having launched in 2016 as a pilot program, Johanna Alonso of the Daily Record reports.

LYNCHING MARKER UNVEILED IN SALISBURY: Efforts in Maryland and elsewhere are drawing the shameful history of lynchings from the shadows of history with pledges to be “Silent No More,” as an event last month in Salisbury was titled. Dozens gathered for the unveiling of a historical marker detailing the lynchings of three men in Wicomico County, Jean Marbella of the Sun reports.

LYNCHING VICTIM REMEMBERED IN CARROLL: Carroll County also remembered a lynching victim, Townsend Cook, who in 1885 was taken from the Old Westminster Jail that still stands next to the Carroll County Sheriff’s Office and shot, then hanged from a tree, Kristen Griffith reports in the Carroll County Times.

LUMBER SHORTAGE SENDS NEW HOME COSTS SOARING: Because of the pandemic and the disruption of the supply chain, the cost of softwood lumber has jumped 112% since April 2020. Plywood has shot up 77% since last year, and other products, like hardwood, have increased 32%, Hallie Miller of the Sun reports. That’s added nearly $36,000 to the average cost of a new single-family home and $13,000 to the price of a new multifamily home, contributing to the growing scarcity of affordable housing for first-time buyers and others.

HISTORICAL BLACK COMMUNITY FIGHTS FLOODING PROBLEM: Elizabeth Shwe of Maryland Matters writes about Eagle Harbor, a small historically Black waterfront community of 69 residents on the southern tip of Prince George’s County, that is being inundated with stormwater coming from the switchyard of the Chalk Point power plant, which is owned by Pepco. Fred Tutman, the Patuxent Riverkeeper who serves as an adviser to Eagle Harbor, said that Pepco seems to be complying with MDE’s requirements, but not responding to the town’s wishes. To Tutman, this is a model case of environmental injustice.

EX-MO CO OFFICIAL ORDERED TO PAY BACK $215,000 MORE: A former economic development executive who embezzled about $6.7 million from Montgomery County was ordered this week, with co-defendants, to pay back an additional $215,000, the conclusion of a two-year legal process. In February 2019, Byung II “Peter” Bang, was sentenced to 15 years in state prison for orchestrating a six-year embezzlement scheme that put nearly $7 million into South Korean bank accounts, Caitlynn Peetz and Steve Bohnel of Bethesda Beat report.