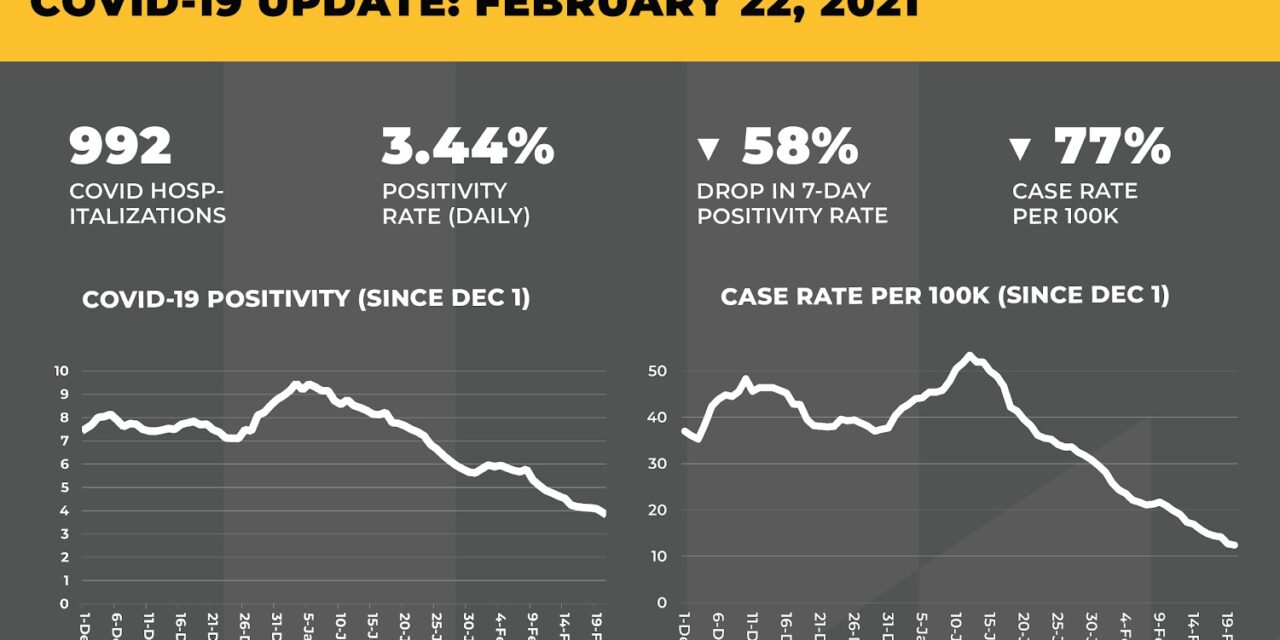 PUSH TO GET BLACKS, OTHER MINORITIES VACCINATED: Maryland lawmakers continue to express concerns about the low numbers of Blacks and other minorities who are being vaccinated against the coronavirus. The continued concerns come even as the state has opened a mass vaccination site in Prince George’s County, reports Bryan Sears for the Daily Record.

‘VACCINE HUNTERS’ TIPS TO GETTING THE JAB: As Marylanders seek appointments to get vaccinated for COVID-19, the “Maryland Vaccine Hunters” Facebook group has become a helpful resource. A detailed spreadsheet created by one member is filled with insights on the best times and days to seek an appointment at the various locations offering them throughout the state, Nathan Ruiz reports in the Sun.

STATE SUPER: BEGIN STATEWIDE TESTING IN SPRING: State School Superintendent Karen Salmon is recommending all public schools give the new statewide test in reading and math for the first time this spring, but scaling back the total amount of testing, Liz Bowie of the Sun reports.

RESTAURANT ASSOC. CHIEF: TIME TO EASE CAPACITY CURBS: Bryan Renbaum of Maryland Reporter spoke with Marshall Weston of the Restaurant Association of Maryland to get an update on how that industry is faring in the face of ongoing COVID-19 restrictions that limit occupant capacity. Weston addressed topics such as the recent lifting of the statewide dining curfew, improving health metrics, the need for fiscal stimulus and the future of the industry.

FREDERICK RESTAURANTS CAN RETURN TO NORMAL HOURS: Restaurants and bars across Frederick County will be able to return to their normal hours of business and serve alcohol past 10 p.m. after an executive order restricting them expired Monday. The order was lifted by County Executive Jan Gardner (D), who cited improving coronavirus metrics to justify her decision, Greg Swatek and Erika Riley of the Frederick News Post report.

END TO PANDEMIC EXEC ORDERS SOUGHT: Supporters of a resolution calling for an end to Maryland’s state of emergency related to the pandemic pleaded with a state legislative panel it is time to end what they called an overreach by Republican Gov. Larry Hogan, Bryan Sears of the Daily Record reports.

HOGAN TO TESTIFY BEFORE U.S. SENATORS: Gov. Larry Hogan is planning to appear before U.S. senators on Wednesday to discuss how transportation projects could help the nation’s economic recovery. Hogan, a Republican, and Michigan Gov. Gretchen Whitmer, a Democrat, are to testify before the Senate Committee on Environment and Public Works, Pamela Wood of the Sun reports.

DELAY IN CENSUS DATA, DELAY IN ELECTION CALENDAR? The 2022 election cycle in Maryland gets under way today as the Maryland State Board of Election and the local boards of election begin accepting certificates of candidacy for those who will be running for office. For candidates for governor, comptroller, attorney general, U.S. Senate and countywide offices, those districts are set. The challenge comes with those positions whose districts must rely on Census information, which has been delayed, Brian Griffiths writes for his blog, the Duckpin.

WA CO PREPS FOR ELECTION SEASON: With the 2020 election barely in the rearview mirror, the one-year window for candidates to file for Maryland offices opens Tuesday, Julie Greene reports for the Hagerstown Herald-Mail. The 2022 election includes the Maryland governor’s race as well as all five seats on the Washington County Board of Commissioners, three of the seven school board seats and state delegate and state Senate seats.

MO CO CONSIDERS SOLAR ON AG RESERVE: The Montgomery County Council is set to decide Tuesday whether to allow a limited amount of solar development in the county’s 93,000-acre agricultural reserve, Rebecca Tan of the Post reports. The vote comes after more than a year of heated debate that has pit environmentalists and solar developers against farmers and preservationists.

CARROLL COVID CASE RATE DROPS NEAR PRE-HALLOWEEN LEVEL: The rate of Carroll countians contracting COVID-19 is at its lowest points since before Halloween, Bob Blubaugh reports for the Carroll County Times. The case rate per 100,000 people, which is reported as an average over the past seven days, dropped by more than 1 percentage point to 8.31%, according to the Carroll County Health Department, the lowest it has been since it was 7.63% on Oct. 29

MORGAN DONORS KEEP GIVING: Nick Anderson of the Post writes about Calvin Tyler Jr. and his wife Tina, who have been giving to Morgan State University for years. On Monday, Morgan State announced a new pledge from the Tylers of $15 million. Their lifetime total now stands at $20 million. All will be dedicated to financial aid, with a goal of helping students graduate with little or no debt.

GARRETT MAN CHARGED IN CAPITOL INSURRECTION: A Garrett County man has been charged with taking part in the Jan. 6 storming of the U.S. Capitol, the Cumberland Times-News reports. Daniel Egtvedt, of Oakland, was arrested without incident Feb. 13 in the area of Boy Scout Road, according to a statement Monday by Maryland State Police.