NO BLANK CHECK AFTERALL: The office of Maryland Gov. Larry Hogan (R) on Wednesday backed away from comments made by his transportation chief that the state has promised Amazon a “blank check” for transportation improvements to lure the company’s second headquarters to Montgomery County, Robert McCartney and Katherine Shaver of the Post write. “Obviously Secretary [Pete K.] Rahn misspoke,” said Doug Mayer, Hogan’s communications director.

HARASSMENT PREVENTION: The Maryland Women’s Caucus released a set of recommendations Wednesday on how to root out and prevent sexual harassment in the Maryland General Assembly. The bipartisan group of female lawmakers wants all legislators and staff to undergo additional and more frequent training. It also wants the legislature to hire a “sexual harassment specialist” who would track all complaints of misconduct and coordinate the enhanced training, Erin Cox of the Sun reports.

RECOUNTING HARASSMENT: A former press secretary to Gov. Martin O’Malley told women lawmakers on Wednesday that she was the target of a string of embarrassing incidents of sexual harassment by lawmakers during her eight years of work in Annapolis, Michael Dresser reports in the Sun. Nina Smith recounted her experiences in the state capital as the bipartisan Maryland Women’s Caucus of the Maryland General Assembly considered a series of recommendations to the leadership of the assembly for dealing with harassment.

PARENTAL RIGHTS: More than 10 years after supporters began pushing for it, Maryland’s legislature has decided — with unanimous votes in the Senate and House — to enable impregnated rape victims to ask judges to end the parental rights of their rapists. Brian Witte of the AP reports that supporters say it has become embarrassing that a state known for its progressive politics is one of the last to adopt such a law. They also credit a growing sense of female empowerment for making the issue a priority.

LEGALIZED RECREATIONAL POT: Supporters of an effort to bring legalized recreational marijuana to Maryland are hoping the third time is the charm, writes Bryan Sears for the Daily Record. Lawmakers Wednesday announced a renewed effort to place the issue of legalized marijuana in front of voters this November through a law that would write cannabis into the Maryland Constitution.

SPOOFING TELEMARKETERS: When it comes to spoofed phone calls, Del. Kathy Afzali (R-District 4) says she’s “fired up.” She introduced legislation on Wednesday, House Bill 1090, that would ban telemarketers and others from falsifying the origin of their call and establish a penalty for providing false location information, Kelsi Loos of the Frederick News-Post reports.

FED FUNDING PRIORITIES FOR MARYLAND: The bipartisan budget agreement reached in the U.S. Senate this week would allow lawmakers to begin cobbling together answers to dozens of questions about Maryland funding priorities that have been unresolved since President Trump took office., John Fritze reports for the Sun. The deal — which would head off a government shutdown set for Friday — amounts to the first step in the process of deciding whether Congress will accept Trump’s call to eliminate money for the Chesapeake Bay, a pair of high-tech biodefense laboratories in the state and several programs at NASA Goddard Space Flight Center.

CRAFT BREWERS AS ECONOMIC ENGINES: In an op-ed for the Cumberland Times News, Comptroller Peter Franchot writes about why promoting the growth of craft breweries is important to all Marylanders, saying that craft breweries are one of the top job creators in the nation. Maryland’s craft breweries are responsible for 6,541 jobs. Those salaries are fed directly back into the local economies at gas stations, retail shops, grocers, restaurants, hotels and housing developments.

STATE ED BOARD VP REBUKED: A Democratic senator scolded the Republican vice president of the state school board for his choice of words at an Annapolis hearing Wednesday when describing what he called Maryland’s low-ranking accountability standard used to measure student academic achievement, Glynis Kazanjian of MarylandReporter reports. 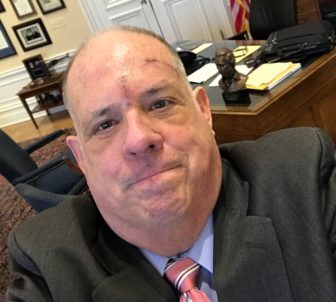 VICTORY OVER CANCER: Gov. Larry Hogan, who said he had surgery Saturday to treat a non-life-threatening form of skin cancer, posted on Twitter that he’s defeated cancer a second time, writes Michael Dresser for the Sun. He did admit one cost of the procedure: His face “is a little rough-looking,” he said Wednesday.

OPIOIDS COST TO GOVERNMENT: Anyone who’s familiar with addiction knows that it’s insidious: It sneakily takes hold until the addict suddenly doesn’t recognize his life anymore. Paying for addiction is like that, too. “The costs build up slowly over time, so you almost don’t even notice it,” says Mark Chalos, a Nashville-based partner at Lieff Cabraser Heimann & Bernstein LLP, a law firm counseling counties considering opioid-related lawsuits. Liz Farmer of Governing magazine reports that the American Enterprise Institute estimates that the top five places residents shouldering the biggest burden are, in order, West Virginia, the District of Columbia, Maryland, Ohio and Connecticut.

CLINGING TO GERRYMANDERING: The editorial board for the Annapolis Capital praises Del. Michael Malone’s efforts to cure the gerrymandering problem in Maryland by suggesting a change to the state constitution that the overwhelming majority of Maryland voters would back, if they ever got the chance. They will not get the chance, at least for the foreseeable future, any more than they will get the chance to vote on Gov. Larry Hogan’s repeatedly offered — and repeatedly shelved — plan to assign district line-drawing to a nonpartisan commission. Regrettably, the state’s Democratic majority is clinging to the same political malpractice that Republicans nationwide have used to cement their advantage over Democrats in the House of Representatives.

COMMUNITY COLLEGE ADVANTAGE: A proposal to make community college tuition-free was hailed by educators as a potential game-changer for students from low- and middle-income families, Bruce DePuyt of Maryland Matters writes. “This can be the greatest piece of social justice legislation in the state of Maryland,” Prince George’s Community College President Charlene Dukes told a Senate panel Wednesday.

SEEKING JUDGESHIP: Two attorneys who sued the state following unsuccessful bids for Anne Arundel County judge in 2016 are running again, Phil Davis reports for the Annapolis Capital. Claudia Barber of Laurel and Rickey Nelson Jones of Glen Burnie, African-American attorneys who both ran as Democrats, have filed to run for a single position on ballot this year, according to state records.

State Roundup: Maryland in ‘dangerous time’ for Covid as cases continue to climb