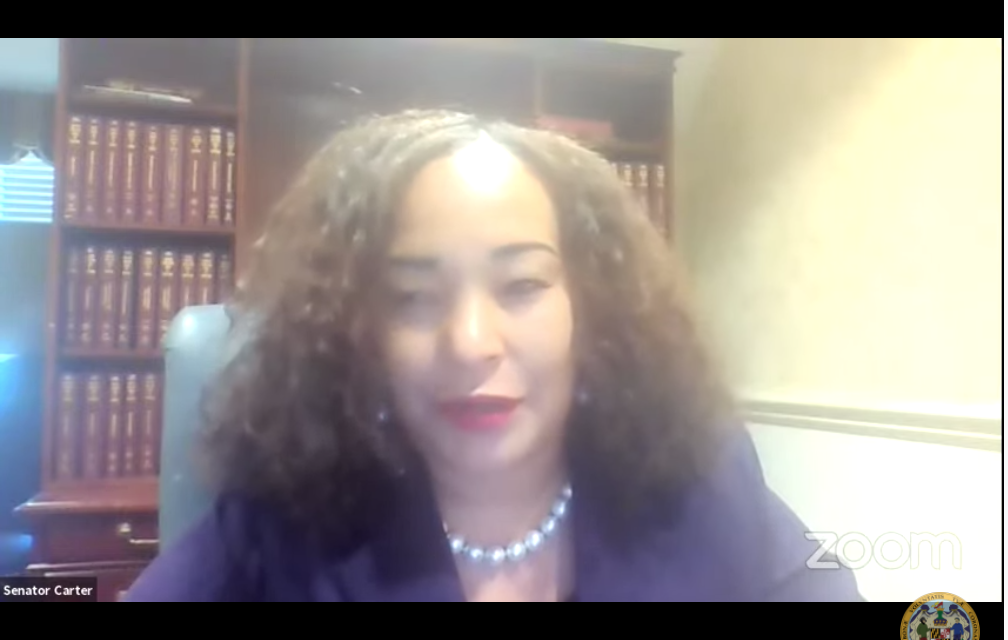 Sen. Jill Carter (D-Baltimore City) Tuesday emphasized her support for legislation that would prohibit minors from being convicted of first-degree murder and allow those who committed that crime as a minor to petition to have that finding reviewed by a court.

Under the legislation, SB0395- Criminal Law-Felony Murder-Limitation and Review of Convictions for Children, persons who were convicted of first-degree murder while under age 18 can file a motion to have their sentence reviewed and may in some circumstances be entitled to a hearing. The legislation applies to convictions that were rendered on or before Sep. 30, 2021. It was previously introduced during the 2020 legislative session.

“I realize that the both the word ‘felony’ and the word ‘murder’ each are unsympathetic words and strung together they are doubly repellant. But the words themselves can’t compare to the actual situation in Maryland where we are still having the practice of charging juveniles with felony murder,” Carter said at a Senate Judicial Proceedings Committee hearing.

Carter said that under current law juveniles can be convicted of first-degree murder in cases where there was no intent to kill or even if the individual did not personally commit that offense and was simply an accomplice and/or present during the commission of that crime.

Carter noted that children do not have fully developed brains and that hey therefore should not be held to the same standards as an adult who commits felony murder.

“Charging juveniles with felony murder is inconsistent with the Supreme Court’s finding on juvenile sentences.”

Carter rejected claims that her bill would let violent offenders off the hook.

But the state’s leading prosecutors said they oppose the bill.

Baltimore County State’s Attorney Scott Shellenberger expressed concern about the possibility of changing dispositions upon the second review by courts.

“What that does is it says that if I can’t prove the new law that wasn’t in effect when I convicted the person, now they are guilty of second-degree murder.”

Harford County Deputy State’s Attorney Gavin Patashnick rejected Carter’s premise that someone who is merely present during the commission of felony murder can be charged with that crime.

“It’s no longer where someone is just standing there. You actually have to be participating in the felony. You have to show that the responsibility of one felon for the act of the other co-felon is limited to acts that naturally and necessarily flow from the common design. So in many instances, you would have a successful defense to felony murder if you are able to show that your actions didn’t follow the common flow and design in furtherance of it. I think there is a misunderstanding that if you are just standing there you are guilty of felony murder. And that’s just not accurate in today’s prosecution.”

For the past eight months the committee has been at forefront of criminal justice and police reform issues in Maryland.