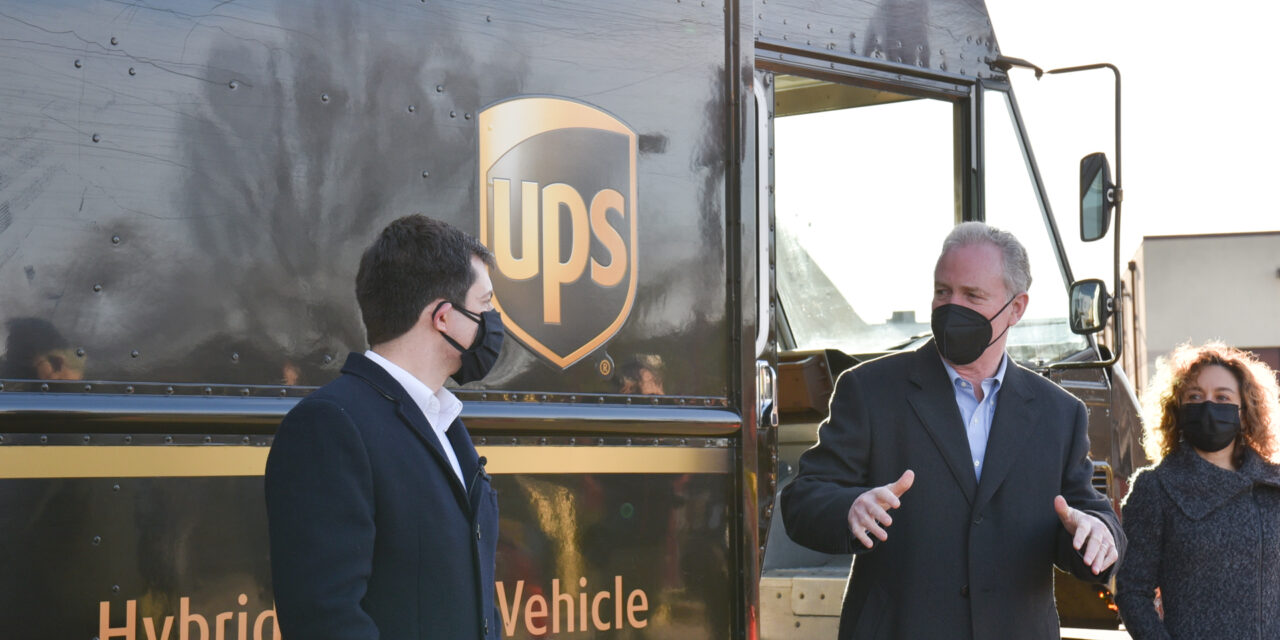 U.S. Transportation Secretary Pete Buttigieg, left, and Sen. Chris Van Hollen toured a UPS facility in Landover Monday that is delivering vaccines to Maryland and D.C. They met with UPS drivers who are delivering vaccines and saw demonstrations of how the vaccine is packaged and delivered across the area. Sen. Ben Cardin and Rep. Anthony Brown were also on the tour. Photo from Sen. Van Hollen’s office

JOBLESS RATE DROPS AS STATE GAINS 6,800 JOBS IN JANUARY: Maryland’s economy gained 6,800 jobs in January and the state’s unemployment rate decreased to 6.4%, according to preliminary data released by the U.S. Department of Labor’s Bureau of Labor Statistics on Monday morning, Bryan Renbaum reports in Maryland Reporter.

GA LEADERS SEEK TO ADJUST KIRWAN TIMELINE: Since the Maryland General Assembly passed a multi-billion-dollar education reform bill a year later than intended, the presiding officers are seeking a complementary bill that would adjust its timeline and address the learning loss that occurred during the coronavirus pandemic, Elizabeth Shwe of Maryland Matters reports.

HOGAN ORDERS COURTS TO NOT GARNISH STIMULUS CHECKS: As stimulus payments begin to land in bank accounts, Gov. Larry Hogan signed an order that they cannot be garnished by the courts. The governor’s order, issued Monday, states that banks cannot use money in customers’ accounts from the stimulus payments to satisfy debts that are subject to legal garnishment, Pamela Wood of the Sun reports.

NEW EMERGENCY CONTRACT TO HELP WITH VAXX ROLLOUT: A Maryland state agency has entered into an emergency contract with Hagerty Consulting, a business management firm, to assist with the COVID-19 vaccine rollout, the state acting health secretary confirmed Monday. Hallie Miller of the Sun reports that it is at least the third emergency contract disclosed in recent weeks that the state has entered into over the past three months to aid with the immunization campaign.

SCHRADER: STATE HAS SIX WEEKS TO JAB MOST VULNERABLE: Maryland has six weeks to vaccinate as many vulnerable and hard-to-reach residents as possible, the state’s acting heath secretary acknowledged on Monday. After that, the opening of the vaccine floodgates to hundreds of thousands — and perhaps millions — of other people will greatly complicate what has already been a difficult task, Bruce DePuyt reports in Maryland Matters.

STATE SENATORS PRESS MIA CHIEF ON ABORTION, LGBTQ RIGHTS: The calm surrounding the confirmation processes for most of Gov. Larry Hogan’s nominees for state posts was briefly interrupted Monday evening when two senators sharply questioned the head of the Maryland Insurance Administration about her views on abortion and LBGTQ rights, Josh Kurtz reports in Maryland Matters.

W. MD VAXX SITE TO OPEN NEXT WEEK: The Cumberland Times-News reports that an unspecified amount of priority appointments will be available for residents of Allegany and Garrett counties when the Western Maryland mass COVID-19 vaccination site opens next week in Hagerstown. Gov. Larry Hogan said Monday at least 2,100 priority appointments per week — divided equitably by population — will go to residents of Allegany, Garrett and Washington counties.

MOST B’MORE AREA TEACHERS SEEKING JAB HAVE GOTTEN IT, BUT: Baltimore-area school districts say that most teachers who have requested a COVID-19 vaccine have been inoculated or scheduled an appointment to do so, but that it’s difficult to know how many teachers have yet to receive — or don’t want — a vaccine, Liz Bowie reports in the Sun.

CARROLL COVID CASES RISE FOR 2nd WEEK: The number of new COVID-cases in Carroll County went up for the second week in a row after seven consecutive weeks of decreases, Pat Stoetzer of the Carroll County Times reports.

NAVAL ACADEMY ADDS COVID VIOLATION PENALTIES: A first-time violation of restriction of movement procedures, put in place to respond to an outbreak of COVID-19 at the Naval Academy, will likely earn a midshipman a major conduct offense, Heather Mongilio of the Capital Gazette reports.

PG, MO CO BUDGETS EMPHASIZE RACIAL EQUITY: Nearly a year after the killing of George Floyd sparked a nationwide reckoning over race, officials in Maryland’s two largest jurisdictions – Montgomery and Prince George’s counties – have proposed budgets that emphasize racial equity and efforts to build back from the financial losses spurred by the coronavirus pandemic, Rebecca Tan and Rachel Chason report in the Post.

CHARLES CORRECTIONS OFFICERS AT CAPITOL RIOT REINSTATED: Glynis Kazanjian and Neal Augenstein of WTOP-FM report that two suspended Charles County corrections officers, investigated for being “inappropriately present” on the grounds of the U.S. Capitol during the Jan. 6 riot, have been reinstated. However, the officers, who were suspended with pay, are still the subject of an internal investigation, which could conclude they violated agency policies during the riot.

BAINUM BALKED AT ALDEN SHARED SERVICES CONTRACT: In following the New York Times story about the stalled sale of the Sun and its affiliates to Rockville businessman Stewart Bainum, Lorraine Mirabella and Christopher Dinsmore of the Sun write that Alden Capital offered Bainum a shared services contract for the Sun that would run five years, but the Maryland businessman balked at those terms, two sources familiar with what happened told The Baltimore Sun.

JUDGE DISMISSES FREDERICK FIREFIGHTERS SUIT; FIGHT EXPECTED TO GO ON: A legal battle between Frederick County government and the union representing its firefighters regarding collective bargaining and a ballot question from 2018 is expected to continue for at least several more months even after a judge granted a motion to dismiss the case Friday, Steve Bohnel of the Frederick News-Post reports.

COURT: BILLBOARD TAX NO VIOLATION TO FREE SPEECH: Baltimore’s tax on commercial billboard operators does not violate their constitutional right to free speech in the advertisements and messages they post, Maryland’s top court ruled Monday in upholding the city’s charge, Steve Lash of the Daily Record reports.

HARRY McCULLOUGH, WHO HELPED PLAN JFX, B’MORE BELTWAY, DIES: Harry J. McCullough, a former Maryland State Highway Administration official who helped plan such transformative roads as the Baltimore Beltway, the Jones Falls Expressway and the ill-fated and much-fought extension of Interstate 70 through the city, died Feb. 28 of a heart attack at his Oak Crest Village Retirement Community home. He was 94, Fred Rasmussen of the Sun reports.