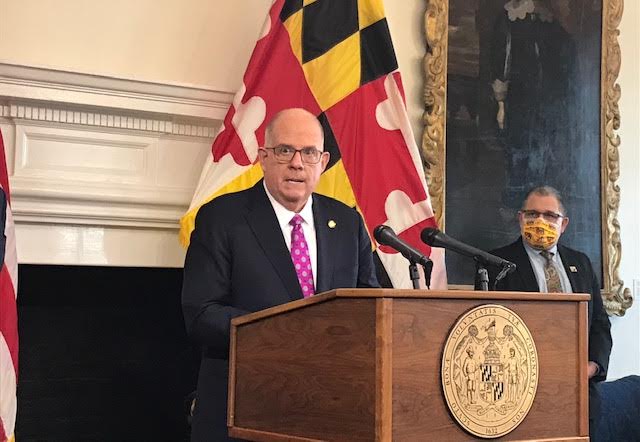 Gov. Larry Hogan said Tuesday that while the state’s rollout of coronavirus vaccines has not been perfect he is nevertheless confident that all that can be done to improve the situation is in fact being done.

Maryland ranks 42 out 50 among states with regard to vaccine administration, according to the CDC. And many Marylanders are who are eligible for vaccination are having trouble signing up for appointments on the state’s website.

Hogan added: “But it’s not about a website or a process. It’s about the fact that there aren’t any vaccines. I know how frustrating it is. And everybody wants a quick fix. But the bottom line is you can’t schedule vaccines for vaccines that don’t exist. We are all working. It’s certainly not a perfect process by any means. But yes, I’m convinced that everyone is working as hard as they can and that we’ve got as good or better a process than anybody else in the country.”

Hogan noted that pharmaceutical giant Johnson & Johnson, which last week became the third company to receive emergency approval from the FDA for a COVID-19 vaccine-has provided Maryland with 49,600 doses for the state’s initial allocation. Hogan further noted that he was recently informed by federal officials that Johnson & Johnson will not be able to provide Maryland with further allocations until around March 18.

MarylandReporter.com asked Hogan about the delay in shipments.

“There are not a whole lot of details. Simply that it takes a while to ramp-up production…They’ve been manufacturing these for many months waiting for the approval. And then they just simply shipped out every single one they had in one week. And now they have to catch back up again. And the next shipment won’t come for another 18 days.”

At Tuesday’s news conference Hogan announced that former CDC Director Robert Redfield will join the administration as as senior adviser for public health. Hogan said that a mass vaccination site in southern Maryland will open this Thursday, March 4, which is a week earlier than had been planned. Hogan further noted that mass vaccination sites on the eastern shore and in the western part of the state will also open this month.

The governor urged Marylanders to be patient while waiting for more vaccines while also emphasizing that the state is increasing its administration of vaccines everyday and will continue to do so.

There are 383,170 confirmed cases of COVID-19 in Maryland as of Tuesday morning, according to the Department of Health, and 7,723 people in Maryland have died from the virus. The state’s positivity rate is at 3.35%, which is within CDC recommended guidelines for containment. Maryland has conducted nearly 8 million COVID-19 tests.

Hogan: Maryland has applied for an extra $300 a week in federal unemployment benefits