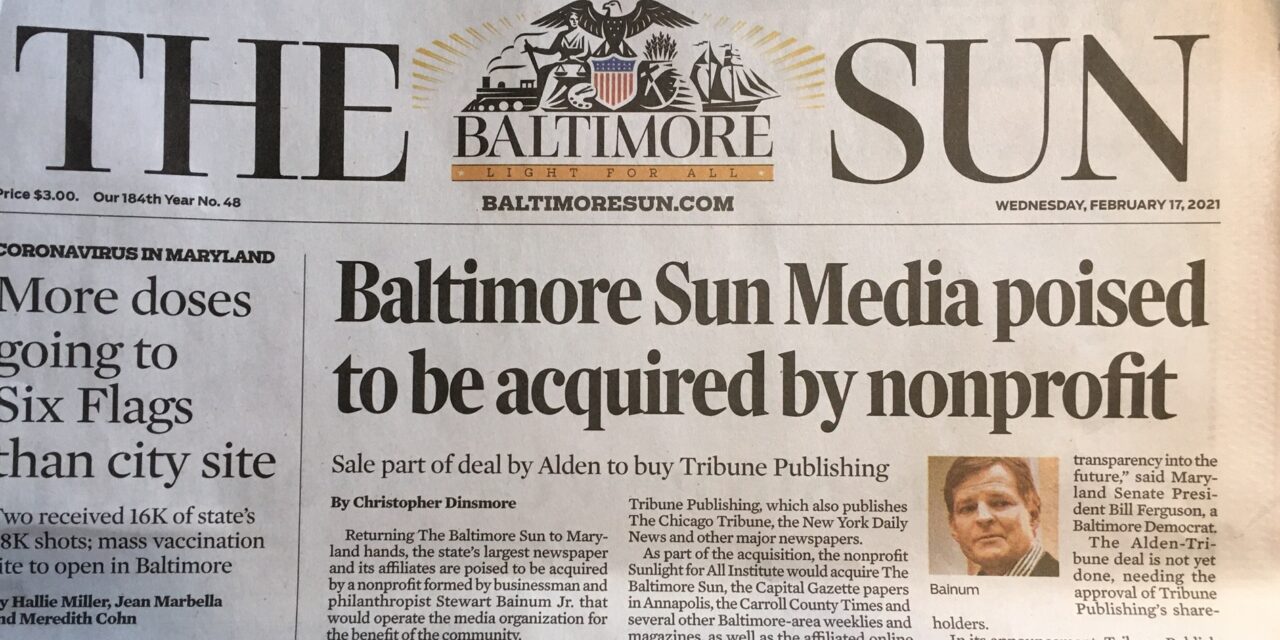 SUN SET TO RETURN TO LOCAL HANDS: Returning The Baltimore Sun to Maryland hands, the state’s largest newspaper and its affiliates are poised to be acquired by a nonprofit formed by businessman and philanthropist Stewart Bainum Jr. that would operate the media organization for the benefit of the community. The sale would be part of a $630 million deal announced late Tuesday for Alden Global Capital to acquire full control of Tribune Publishing, Christopher Dinsmore of the Sun reports.

WHO IS STEWART BAINUM? The Baltimore Sun is poised to be acquired by a nonprofit founded last month by Stewart Bainum Jr., a Montgomery County-raised business owner who has also been active in Maryland politics and philanthropy, John O’Connor of the Sun reports. The acquisition would include The Sun, The Capital Gazette in Annapolis, the Carroll County Times and other community newspapers in the Baltimore metro region.

OPINION: GOOD NEWS FOR THE SUN, BAD NEWS FOR TRIBUNE: News media watcher Dan Kennedy writes that while the sale is good for the Sun group, it’s bad news for the Tribune et al. Tribune buyer Alden Capital is the most avaricious of the chain newspaper owners, squeezing the life (and the journalism) out of its properties, he writes.

VAN HOLLEN, STATE LAWMAKERS URGE ACTION ON HOUSING CRISIS: U.S. Sen. Chris Van Hollen teamed up with Maryland’s state lawmakers on Tuesday to emphasize the need for legislative action to help avert an eviction crisis spurned by the coronavirus pandemic, Bryan Renbaum of Maryland Reporter writes. The federal moratorium on evictions expires on March 31. Maryland has suspended evictions during the state emergency but tenants must prove that their inability to pay is directly attributable to the pandemic.

FRANCHOT: MANY RELIEF CHECKS TO ARRIVE FRIDAY: Maryland Comptroller Peter Franchot expects 98% of all relief payments to be processed and in people’s bank accounts as early as Friday, reports Catherine Scott of Capital News Service in a story that appears in Maryland Reporter. He said 266,985 electronic payments totaling $113.6 million and 148,972 paper checks totaling $61.7 million will be processed and sent to eligible recipients starting Tuesday as part of the recently passed RELIEF Act.

CENSUS DELAY MEANS STATE WON’T REDISTRICT TIL 2022: The U.S. Census Bureau’s decision to delay releasing population data until fall almost certainly guarantees that Maryland lawmakers won’t redraw the state’s political boundaries before next year, political analysts said on Tuesday, Bruce DePuyt reports for Maryland Matters. The bureau originally planned to get results of the 2020 Census to states by March 31. But officials announced on Friday that they will provide it by Sept. 30 instead.

MEDICAL DEBT GROWING: Medical debt was a major problem for many Maryland families even prior to COVID-19, advocates say, with hospitals filing nearly 150,000 lawsuits against patients with outstanding debts over the past decade. But it’s become an even graver issue in the last year, when many have lost their employment-based health insurance and were hospitalized with the disease, Johanna Alonso reports for the Daily Record.

SEN. KELLEY PUSHES JUVENILE JUSTICE BILL: Senate Finance Committee Chairwoman Delores G. Kelley (D-Baltimore County) presented a bill Tuesday that would prohibit judges from sentencing juvenile offenders to life without the possibility of parole, Hannah Gaskill of Maryland Matters reports. Iterations of this legislation that would put Maryland in line with U.S. Supreme Court precedent have cycled through the General Assembly for years.

BILL WOULD ALLOW PARENTS TO MOVE ED FUNDING: After Maryland Democrats successfully pushed through a multi-billion dollar education reform bill last week, one Republican lawmaker has proposed pandemic-related education legislation of her own. HB939, introduced by Del. Lauren Arikan would allow, if a school district fails to open in-person instruction by the fall, parents to reallocate the public school funds of their child toward an alternative school, Patrick Hauf of CNS reports. The article appears in Maryland Reporter.

BILL ALLOWS FOR MORE LOCAL CURBS ON TOBACCO: Maryland legislators introduced a bill that would allow localities throughout the state to place more stringent restrictions on the sale and distribution of cigarettes and other tobacco products, CNS’s Jacob Steinberg reports in Maryland Reporter.

FAILING GRADES INCREASE FOR CARROLL STUDENTS: Kristen Grifffith of the Carroll County Times reports that the number of Carroll County Public Schools students who received at least one failing grade in the second quarter increased by nearly 400 compared with the first quarter and more than tripled compared with the second quarter of last year. Jason Anderson, the school system’s chief academic, equity and accountability officer, said the issue is disengagement and students not attending their online classes.

ARUNDEL WANTS MORE TEACHERS VAXXED: As school districts near the return to in-person instruction on March 1, there is push to make sure teachers and school staff are vaccinated before returning to the classroom. “Well I’m not satisfied with the pace of getting teachers vaccinated,” said Anne Arundel County Executive Steuart Pittman. He says that getting all teachers in the county vaccinated by March 1 will be a challenge, but he stresses schools need to open, Joseph Ojo reports for WBFF.

‘SEISMIC SHIFT’ FOR MARYLAND’s CAPITOL HILL STAFFERS: When they pull back the blinds, staff members in the office of U.S. Rep. Dutch Ruppersberger can look across Independence Avenue at the U.S. Capitol, which seems to glow at night. The view, once stirring, now – after the insurrection of Jan. 6 – unleashes more complicated emotions. “There has been a seismic shift in how these staffers look at the sanctity and safety of Congress,” said U.S. Rep. David Trone. “It’s never going to the same again.”