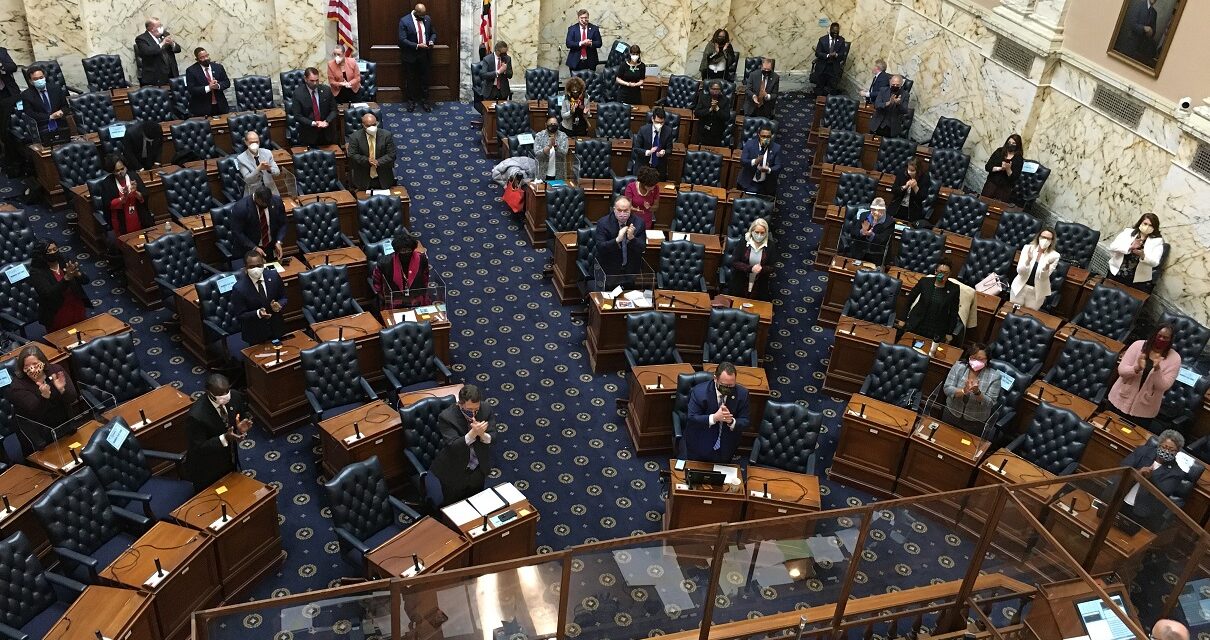 On Wednesday, socially distanced members of the Maryland House of Delegates applaud the reelection of Speaker Adrienne Jones. MarylandReporter.com photo

UNUSUAL, DIFFICULT SESSION OPENS: Senate President Bill Ferguson kicked off the start of the 442nd session of Maryland General Assembly on Wednesday afternoon with a sobering observation that came as his 46 fellow lawmakers listened on from their glass booths, installed to maintain social distancing during the COVID-19 pandemic, writes Bryan Renbaum for Maryland Reporter. “This session will not be easy. In fact, it may be one of the most operationally difficult sessions that we have seen in the last 120 years,” Ferguson said in a floor speech shortly after he was unanimously re-elected to this current position.

HOGAN URGES PASSAGE OF RELIEF BILL: Speaking just hours before the General Assembly was set to convene, Gov. Larry Hogan urged lawmakers Wednesday morning to pass as soon as possible his proposed $1 billion Relief Act for Maryland businesses and residents hardest hit by the pandemic-spurred economic freefall, reports Bryan Sears for the Daily Record. “I’d like to see them bring it right to the floor,” Hogan said at the Record’s Eye on Annapolis Summit. “We cannot wait until February.”

BILLS ADDRESS RACIAL HEALTH DISPARITIES: Racial health disparities have become more stark than ever before in the wake of a pandemic that has disproportionately affected Black and Latino communities nationwide and within the state of Maryland, lawmakers say. That’s why Del. Joseline Peña-Melnyk is sponsoring a slew of health equity-related legislation that she has worked since the summer to develop, reports Johanna Alonso for the Daily Record.

LAWMAKERS SEEK CLARITY ON VACCINE ROLLOUT: Lawmakers pushed state Department of Health officials Wednesday for more clarity on how COVID-19 vaccines would be rolled out, after recent complaints of slow action and as the state’s COVID-19 positivity rate continues to hover at 8-9%, Elizabeth Shwe of Maryland Matters reports.

DEMOCRATIC REPS VOTE FOR IMPEACHMENT: The seven Democratic members of Maryland eight-person U.S. House delegation joined the majority in the U.S. House voting to impeach Trump Wednesday, making him the first president to be impeached twice, Heather Mongilio of the Capital Gazette reports. House Majority Leader Steny Hoyer had the last word: “Reject deceit,” he said. “Reject fear-mongering. Reject sedition, tyranny and insurrection. Reject the demand of fealty to one man over fidelity to one’s country.”

MARYLANDER, 26, CHARGED IN INSURRECTION: A 26-year-old Maryland man photographed inside the U.S. Capitol during the Jan. 6 insurrection — who was wearing his work badge and then fired from his job — has surrendered on federal charges, Justin Fenton of the Sun reports.

HOGAN TO HAVE ‘EARLY STAGE’ SKIN CANCER REMOVED: Gov. Larry Hogan will undergo a procedure Friday to remove early stage squamous cell cancer from his face and shoulder. The Republican governor said Wednesday that he doesn’t believe he will need treatment beyond the procedure, which he described as “minor surgery,” Pamela Wood of the Sun reports.

OPIOID-RELATED DEATHS SPIKE IN WA CO: Opioid-related deaths spiked in Washington County and the rest of the state in the third quarter of 2020, with the COVID-19 pandemic worsening effects of the opioid crisis, the state reported Wednesday. The numbers come from the Maryland Department of Health and the Opioid Operational Command Center, a state entity that has been tracking the impact of the opioid crisis, Dave McMillion of the Hagerstown Herald-Mail reports.

CITY CONTACT TRACERS SHORTED ON WAGES: Emily Opilo and Meredith Cohn of the Sun report that some of Baltimore’s coronavirus contact tracers, employed to help manage the spread of the deadly virus, are among a group of city employees who haven’t been paid or who have received only partial paychecks in the last few weeks, city officials confirmed Wednesday.

NOVOTNY SWORN IN AS HOWARD/CARROLL DELEGATE: Reid Novotny was sworn in as the new delegate representing parts of Howard and Carroll counties in District 9A on Wednesday, the opening day of the 2021 Maryland General Assembly session, Ana Faguy of the Howard County Times reports.

RACIAL SLURS DURING MIDDLE SCHOOL ORIENTATION: Eighth-grade Sykesville Middle School students heard a racial slur repeated multiple times during a virtual orientation Wednesday, Kristen Griffith of the Carroll County Times reports. Carey Gaddis, spokesperson for Carroll County Public Schools, confirmed the incident and said someone participating in the orientation “repeated the N-word several times. They did not offer any other words or comments.”