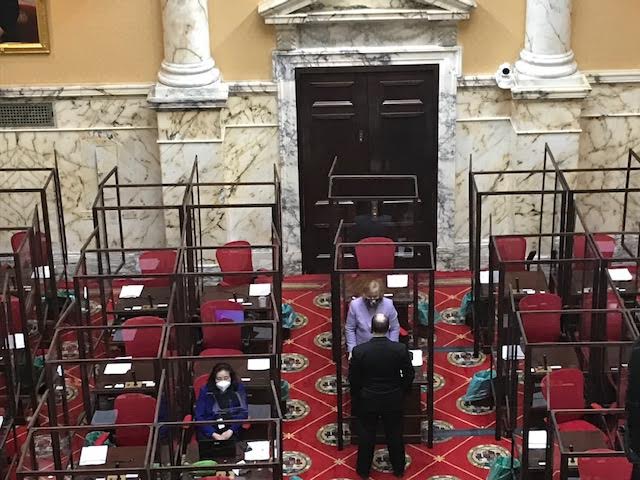 Senate President Bill Ferguson kicked off the start of the 442nd session of Maryland General Assembly on Wednesday afternoon with a sobering observation that came as his 46 fellow lawmakers listened on from their respective glass booths that were installed to help maintain social distancing in the chamber and to protect members from COVID-19.

“This session will not be easy. In fact, it may be one of the most operationally difficult sessions that we have seen in the last 120 years,” Ferguson said in a floor speech shortly after he was unanimously re-elected to this current position.

“But I am confident that will we get through this together because we have such an incredible moment,” he said. “Marylanders are counting on each and every one of us to do what they don’t have the ability to do themselves: assist the most vulnerable families and businesses, support education for our children, restore true trust and accountability in policing, and implement policies that eliminate inequities in all parts of our society. It’s going to take very very tough conversations. It’s going to take creative problem solving, long hours, and working across the aisle.”

Ferguson reflected on the events of the past year, ranging from the start of the pandemic to the recent attack on the U.S. Capitol by ardent supporters of President Donald Trump.

“The last time all of us were here was on March 18 (2020). We ended the 90-day session 19 days early for the first time since the Civil War. When we were looking ahead back in March at that time none of could have predicted what the next 10 months would unfold. We witnessed a global virus overwhelm our hospitals, our economy, our children’s education, and our fundamental sense of security about our future. We felt the pain of tragedy and death as far too many of our friends and family members and neighbors succumbed to this deadly virus that knows no political party…we experienced a summer of painful unrest that arose from a reckoning of racial injustice that systematically affected our institutions for far too many generations. We traversed a national political campaign for president that tore at the very fabric of our country’s stability. And most recently, we witnessed the thinkable: the storming of the U.S. Capitol by our fellow Americans.”

Ferguson emphasized that he and his colleagues ultimately share a common vision.

“Fundamentally we believe that tomorrow can be better than today. We know that these problems and challenges will not be solved by hope alone. They will take work. They will take compromise. And most importantly, they will take solutions.”

The situation on the ground in Annapolis is far different this year than in previous years.

Because of the pandemic, the State House is off-limits to the general public. For the most part, only lawmakers, their staff, and members of the media are allowed inside the building. Reporters must sit in the gallery in both the House and Senate chambers. That means no on-the-floor interviews or gaggles. Committee hearings will be held virtually, which means public testimony will be somewhat limited.