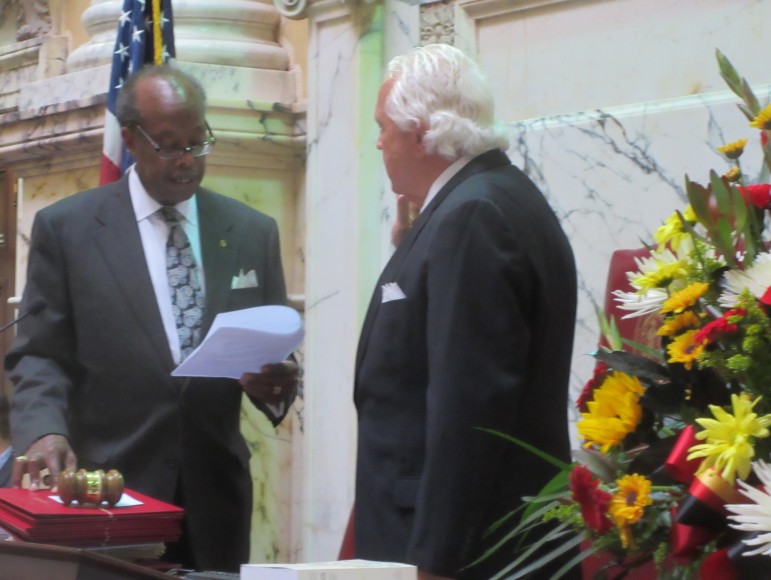 Amid a sea of Maryland state-flag neckties and toddlers in suits, legislators of the Maryland General Assembly were gaveled in for the first day of the 2016 session.

It is Miller’s 30th legislative session as president, the longest-serving presiding officer in any U.S. legislature. Miller, 73, is now also the longest-serving member of the Maryland General Assembly, first elected to the House of Delegates in 1970.

“He’s one of a kind,” said Sen. Victor Ramirez, D-Prince George’s, as he nominated Miller to take the gavel again. “He’s my Michael Jordan of politics. He’s a living legend.”

Miller described the Senate as a family, presenting baby gifts to Minority Leader J.B. Jennings, R-Baltimore County, and Sen. Justin Ready, R-Carroll, who have a newborn girl and boy, respectively.

“Republicans may not be able to produce bills, but they can do something else,” Miller joked.

The Maryland Constitution requires bills vetoed by the governor as its first order of business, but when the topic came up, the votes to sustain or override the vetoes were put off till next Wednesday, Jan. 20. Miller told reporters afterward that a compromise measure was being worked for one of the six bills Gov. Larry Hogan vetoed for policy reasons.

But Democrats, who control both chambers of the General Assembly, were resolute.

“We want to restore some of these veto bills, especially as it relates to ex-felons,” said Senate Majority Leader Catherine Pugh, D-Baltimore.

On the table is the legalization of pot-smoking paraphernalia—voting rights for felons on parole or probation, hotel booking taxes, and restrictions on police seizing assets of less than $300.

Hogan adamant against voting for ex-felons 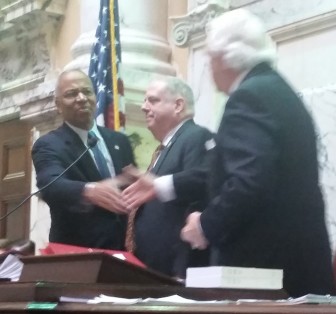 Lt. Gov. Boyd Rutherford shakes hands with Senate President Mike Miller as Gov. Larry Hogan prepares to address the Senate. “I’m always available to you,” Hogan told them. “Just pick up the phone and tell us what you want to talk about.”

Hogan chalked up some of these vetoes, like the bills on marijuana and police seizures, to minor issues with legislation that he hoped would eventually be ironed out in the General Assembly.

He said he was most concerned with the legislation allowing ex-felons to vote.

“Former felons can already vote in Maryland, it’s a misrepresentation of the facts,” Hogan said at the summit. “This is allowing current felons, who haven’t yet served out their sentences, who are still on parole or probation, who haven’t finalized their debt to society, whether we should allow them to vote. I disagree with it.”

Hogan said that his proposed tax plan, which includes $480 million in tax cuts over five years, is something that Republicans and Democrats should both agree on.

Despite Hogan’s hopes for bipartisan support, Miller and Busch told WEAA radio host Marc Steiner they had not been consulted about the governor’s tax plan.

“The problem is communication,” Miller said. “It’s the same problem between husbands and wives, if you want to stay married, you have to communicate.”

Hogan’s tax plan, which he announced Tuesday, includes a 3 percent Earned Income Tax credit over one year, similar to a plan proposed by Sen. Richard Madaleno, D-Montgomery, in 2014.

“He’s just trying to accelerate the bill that I passed two years ago, as far as getting the increase,” Madaleno said. His bill passed the Senate unanimously toward the end of session but was never acted on in the House.

“I’m glad that the governor has gotten on with one of my priorities.”

Beyond that, Madaleno was critical of Hogan’s plan. 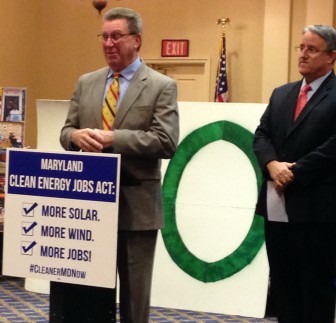 While most lawmakers were greeting each other and readying for a noon start to the legislature, some spent the morning touting bills and issues they planned to support during the 2016 session.

Several state legislators held a news conference to call for quick action on the Clean Energy Jobs Act, which, according to the Maryland Climate Coalition, would mandate the state increase its minimum clean energy consumption to 25 percent by 2020.

The bill also includes a $40 million plan to train and prepare more people in Maryland for careers in clean energy.

Representatives from Mothers Against Drunk Driving also gathered Wednesday morning and called on the legislature to enact the All-DUI Offender Ignition Interlock Law. This law would require ignition interlocks for convicted drunken-drivers with a blood alcohol concentration of .08 or greater. This device requires the driver to blow into a mouthpiece before starting the vehicle. If the driver is impaired, the device will prevent the engine from being started.

Montgomery County Police Department Traffic Division Director Capt. Tom Didone said he attended the news conference in honor of Officer Noah Leotta, 24, who was on DUI patrol in December when he was struck and killed. Police have charged a man with driving drunk in connection with Leotta’s death.

“The reality of this is you look at this young man and you can’t help but to see a bright a promising person whose life was lost,” said Didone. “This is a person who’s dedicated his life to protecting citizens and removing drunk drivers from the highway and who has his back?” 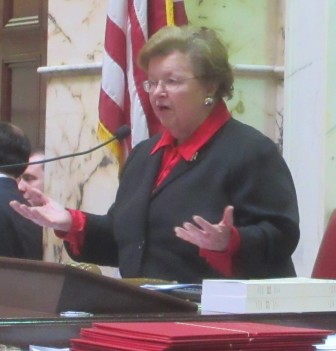 At the end of the morning summit, outgoing U.S. Sen. Barbara Mikulski reflected on her  40 years of service as the longest serving woman in the history of Congress,.

She said that she was pleased that there is more minority and female participation in politics, and that technology has made it easier to reach people.

As far as her retirement plans go, she wants to continue working with state officials on issues like combating heroin.

“No golf, the nuns would never let me take up a sport where I had a club in my hands.”

As she has for most recent sessions, Mikulski spoke to both the House and the Senate, making what she said was her last appearance as head of Maryland’s congressional delegation. She touted how Team Maryland had brought home the federal bacon.

And she closed with her traditional send-off, “May the Force be with you,” more current this year with the Star Wars revival.

CNS Correspondents Connor Glowacki and Amber Ebanks contributed to this report, as did Len Lazarick of MarylandReporter.com.