Spring Grove Hospital Center in Catonsville is one of the Health Department facilities with staffing shortages. Spring Grove, founded in 1797, is the second oldest psychiatric hospital in the U.S. and has 375 beds. Photo by clantyr with Flickr Creative Commons License

Nurses who work in state facilities and hospitals are among those who will benefit the most if the Maryland Health Department’s proposed FY 2020 budget remains intact, giving them a 11.5% raise.

While all state workers are slated to receive cost-of-living increases and a bonus tied that will total 5.5 % come July 1, nurses and a few select others are also getting bumped up one pay grade, for another 6% increase,  giving them a total pay raise of 11.5% in Gov. Larry Hogan’s proposed budget, state analysts told a Senate subcommittee on Thursday.

The pay increase, and expanded benefits, are designed to help relieve the 12% vacancy rate that plagues the department, mostly in direct-care positions. Correctional officers are also getting a pay bump in order to solve similar staffing shortages.

Senators on the Health and Human Services Subcommittee got a mostly sunny forecast for the Maryland health department — the state’s largest single operating budget analyzed here – but there are some clouds on the horizon.

The department employs close to 6,300 people with a total budget of $14.5 billion in the governor’s proposed budget for the year that begins July 1. The Health Department gets an increase of only $31 million over FY 2019, a 0.2% increase that is one of the smallest hikes in the overall $46 billion budget that goes up by almost 4%.

More than half the health budget, nearly $8 billion, comes from federal funds, mostly for the Medicaid health insurance for low-income people. That figure goes down $147 million from FY 2019 due to declining enrollment in Medicaid, which accounts for 77% of the department’s spending.

Simon Powell, a policy analyst for the Department of Legislative Services, described the 0.2% increase in the overall budget as “pretty flat” in the hour-long hearing. The full video-stream of the hearing is on the Maryland General Assembly’s web site; the actual hearing begins about eight minutes in.

“This is what the budget for the Health Department looks like when it’s a good year,” Powell said. However, with economists forecasting a possible recession in the outyears, he struck a cautious tone. “We don’t believe this growth is sustainable…Items funded this year are not going to be funded next year in this department. Enjoy it while you can.” 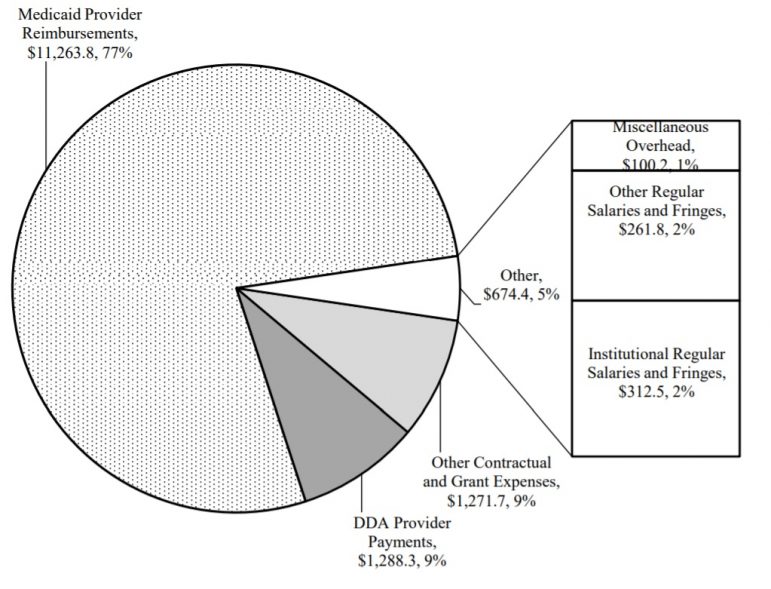 The health budget adds 142 new positions for FY 2020, however the current vacancy rate of 12% in existing positions, especially in direct-care roles, was cited as an ongoing problem. It’s risen from about 7% in 2010.

“There’s still a high vacancy rate in the department,” Powell noted. Almost 15% of existing vacancies,  are in the Developmental Disabilities Administration, the highest level among MDH divisions.

A departmental study on recruitment and retention of direct-care positions this month from Health Secretary Robert Neall shows the vacancy rate amongst these positions has almost doubled, rising from 7.25% to 14% from December 2014 to June 2018. The direct care designation covers 119 job classifications, including nurses, physicians, and direct care aides working in state institutions.

Jordan Butler, chief financial officer for the Health Department, said at the hearing that state employees received a 2% cost of living increase (COLA) Jan. 1 with an additional 0.5% COLA and a one-time $500 bonus, triggered by a budget surplus, to follow in April. The FY 2020 budget includes a 3% COLA for state employees effective July 1. In addition, the Health Department’s budget includes a one-grade step increase for registered nurses in FY 2020, which equates to an additional 6% increase to help with recruitment.

A salary adjustment for psychiatrists and a one-grade increase for alcohol and drug counselors, mental health counselors, and epidemiologists, are also included in the Health Department’s proposed budget.

In addition, the state has expanded its benefits package for direct-care workers to better compete with private employers, offering up to $500 of tuition reimbursement and student loan repayment up to $20,000 over a 10-year period for qualifying employees, according to the departmental report.

“The sum-total compensation package for nurses will be greatly enhanced as of July 1, 2019, and should help reduce some of the current nursing recruitment and retention difficulties the Department is currently experiencing,” the report concludes.

Labor leaders questioned whether the compensation package would be enough to solve the department’s recruitment and retention problems.

Sue Esty, legislative director for AFSCME Council 3, testified at the hearing, “Our members tell us it’s not infrequent to work double shifts or lose your day off to deal with the staffing crises.”

She cited dangerous working conditions for direct-care staff at state institutions such as the Clifton T. Perkins Hospital Center, a 250-bed psychiatric hospital in Jessup for criminal and dangerous patients.

“It’s a problem waiting to burst open in a very bad way,” she said.

Jacqueline Caldwell, president of AFSCME Local 539, who works at Springfield Hospital Center, a regional psychiatric hospital in Sykesville, said, “The staffing shortage is a distressing matter… New staff will not stay. We are a training ground right now.”

Robert Baldwin, a direct-care assistant for the last eight years at Spring Grove Hospital Center, a psychiatric hospital in Catonsville, said the staff there works with a large range of patients in close quarters. He is currently secretary-treasurer of AFSCME Local 266.

“We need fair and equal compensation to match the danger and the job we do on a daily basis,” he said. “It gets hard to do that job when I don’t know if I can pay my rent,” he said.

Sen. Guy Guzzone, D-Howard, who chairs the Health and Human Services Subcommittee of the Senate Budget and Taxation Committee, thanked those who testified “for doing a difficult job” and pledged to “try to address some of these compensation issues.” Guzzone has been a strong advocate for increased pay for behavioral health providers.

Budget stalemate persists as Senate and House fail to compromise 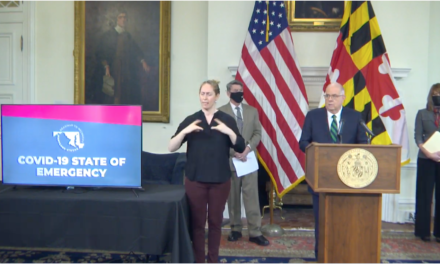