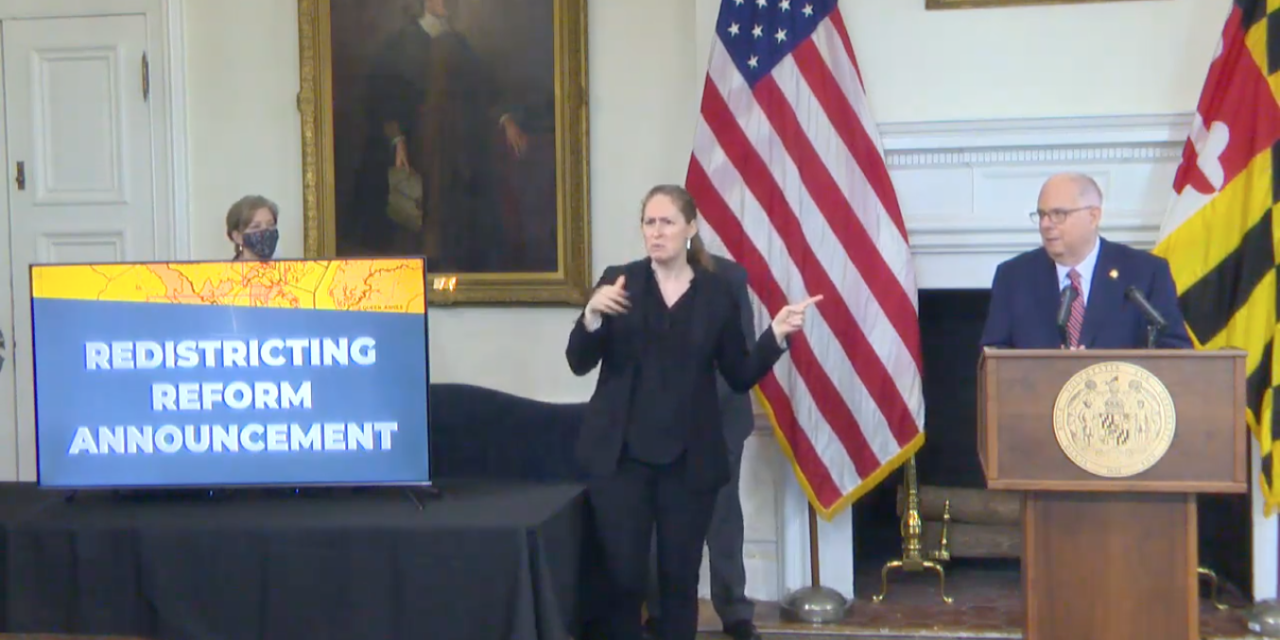 Gov. Larry Hogan issued an order Tuesday to establish a redistricting commission that will be composed of ordinary citizens and is tasked with making the state’s congressional and legislative districts more competitive.

Maryland has some of the most gerrymandered congressional districts in the nation. And though Democrats outnumber Republicans by a 2-1 margin in the state, Maryland’s congressional delegation reflects a starker balance of power with 7 Democrats and just one Republican.

“Today I am launching the beginning of what will be a sustained effort to restore fairness and competitiveness to Maryland’s congressional and legislative districts by the 2022 elections. I have just signed an executive order which has established for the first time ever in our state’s history a Maryland citizens redistricting commission which will be charged with preparing fair, honest, balanced and equitable maps for all of Maryland’s congressional and legislative districts,” Hogan said at a news conference at the State House in Annapolis.

Hogan added: “Districts which comply with the U.S. Constitution, with federal law, including the Voting Rights Act, and with all applicable judicial discretion, direction, rulings, judgments or orders. As such, these maps must respect natural boundaries and the geographic integrity and continuity of any municipal corporation, county, or other political subdivision. Districts must be geographically compact and must not take into account how citizens are registered to vote, how they have voted in the past, or what political party they happen to belong to.”

The governor said the citizen committee members will be made up of Maryland voters who have been registered with the same political party for at least three years or those who have not been registered with any political party for that same period. Lobbyists, members of the General Assembly, members of Congress, and members of the governor’s staff are among some of the individuals who are prohibited from serving on the commission Hogan said.

Marylanders who wish to serve on the commission can apply online and must do so by February 11, Hogan said

Hogan described how the commission will work.

“This commission will conduct its business with integrity, in a completely open and transparent manner, holding regional hearings to allow Marylanders to offer their input, and by creating an online portal for citizens to review data and submit comments and input. The committee will approve and certify final redistricting plans for Maryland’s legislative and congressional districts and draw final maps that correspond to those plans, which will be submitted for introduction in the General Assembly.”

Hogan noted that for five consecutive years he has submitted redistricting legislation to the legislature but that lawmakers elected to take no action.

Also, during Tuesday’s news conference Hogan relayed that the first two cases in Maryland of the U.K. variant of the coronavirus have been detected in a family that lives in Anne Arundel County. Hogan said one member of the family recently traveled abroad said that the entire household, which includes two children, are in quarantine.